Netanyahu runs against himself in Likud primaries

Israeli Prime Minister Benjamin Netanyahu is currently the only candidate in the upcoming Likud primary for party leadership that he initiated, and yet he still fears losing to blank ballots. 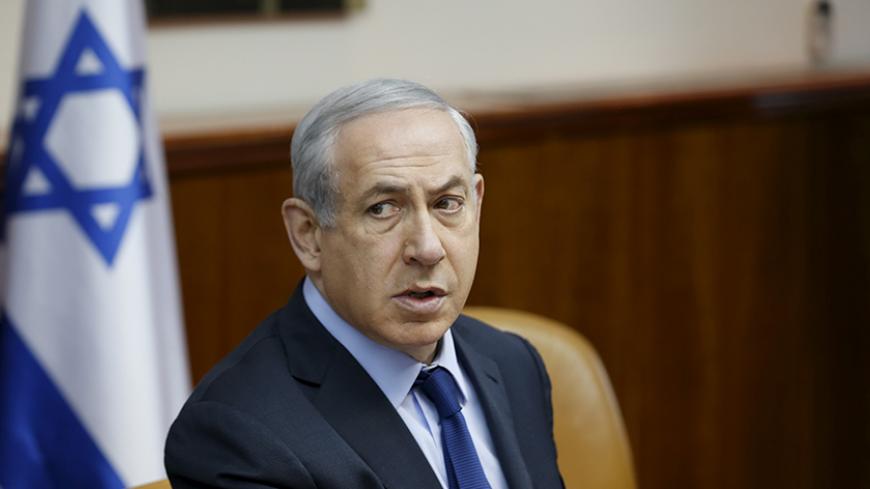 Just a few weeks after he first made the announcement, it can be determined unequivocally that Israeli Prime Minister Benjamin Netanyahu’s decision to advance the Likud’s leadership primary — intended to stymie potential rivals — has succeeded beyond all expectations. In just a little over a month, on Feb. 23, Netanyahu will run unchallenged for the position. Some 100,000 party members will be asked to choose between him and a blank ballot.

Given that he is the only candidate, the Likud’s Central Election Committee met Jan. 11 to discuss the possibility of canceling the entire election process, which would save the party some 4 million shekels ($1 million). Another option raised during the discussion was to offer voters two distinct options on Netanyahu: “Aye” or “Nay.” The prime minister opposed both options, and insisted that he run against a blank ballot instead. He rejected the first option so that party officials could not claim in the future that a second primary round should be held, since elections were not held when scheduled. The second option was out of the question. Netanyahu was worried about being humiliated. As expected, he got exactly what he wanted.

Much to everyone’s surprise, even after the party agreed to do what he wanted, Netanyahu was overcome by an extreme case of political paranoia, unusual even for a wary politician like himself. Senior Likud Party officials told Al-Monitor that the chairman of their party began to worry about the most pessimistic scenarios, including the possibility that potential rivals such as Ministers Yisrael Katz and Haim Katz would act against him and prod their supporters to cast blank ballots in an effort to embarrass him. Netanyahu will be elected anyway, but his image would suffer considerable if he gets fewer voters than the number of blank ballots cast.

As a result of this fear, Netanyahu has demanded that polling stations be placed in as many places across the country as possible. This would make the election process easier for many and enable unaffiliated voters, who do not belong to any camp, to come to the polling stations and support him. Likud officials believe the very fact that the results of this election are known in advance will result in many members of the party to stay home and avoid voting.

Those senior Likud members who spoke with Al-Monitor joked around at Netanyahu’s expense, suggesting that he would run an intimidation campaign to get voters to go out and support him, just as he did during the general elections on March 17, 2015, when he warned his constituency that Arabs are voting "in droves." One top Likud minister made no attempt to hide how ridiculous and funny the situation is. “It is so baseless and so ridiculous that I can imagine Netanyahu calling activists the days before the election to explain that if the party wants to show the left how strong the Likud really is, it is important that he win by a landslide. I can also imagine him holding political events to rally support for himself,” he told Al-Monitor on condition of anonymity. And so, on Jan. 11, the corridors of the Knesset and the Likud offices reverberated with comparisons between the party and North Korea.

It is quite possible that Netanyahu's decision to finally respond to the opposition’s campaigns against him over the ongoing terror wave came as part of his primary campaign. He did this at the start of the Likud Party’s weekly meeting on Jan. 11, when he ridiculed the left for rushing to accuse him of being behind the incitement that led to the fire in the B’Tselem offices in Jerusalem, which they mistakenly thought was arson. “All these lies won’t stop me, us, from continuing to wage a determined campaign against terrorism, from leading the national camp in ensuring the security of the State of Israel and its citizens, and, of course, from continuing to build up the country. … What is the opposition engaged in these days? They are launching an ad campaign. They insist on babbling. That’s what they’re doing. We take action. They babble.”

This is undoubtedly one of the most unsubstantiated and delusional political incidents ever seen in Israel, and it is coming from the ruling party. Netanyahu — now at the height of his power — decided to advance the party leadership primary, even though there are no new elections on the horizon. And he is doing so because of his concerns about potential rivals, even though it is in no way clear how significant the threat they pose really is. He is doing it as a matter of routine. It is a ritual he has adopted and followed since 2007. On the other hand, the last three times this happened, he was challenged by other candidates — even if they were marginal figures such as former Knesset members Moshe Feiglin and Danny Danon. This time, however, Netanyahu is all alone at the top. Anyone who considered running against him ended up disappearing from the political arena: Former Minister Gideon Saar quit politics, Interior Minister Silvan Shalom was forced to resign recently due to suspicions of sexual harassment and Danon was appointed ambassador to the United Nations. That's how Netanyahu found himself making party history, and a controversial history at that. For the first time ever, only a single candidate will run for head of the party.

Netanyahu can take pride in the fact that, for the near future at least, he has unrestrained control of his party. It is just one more justification for the moniker, “King Bibi.” In the long term, however, the absence of any meaningful alternative to the Likud’s leadership for so many years is a symptom of an ailing party. Any party without a broad leadership base and productive internal struggles — ruled instead by a single individual, who has entrenched his authority so thoroughly that there isn’t even a peripheral candidate to run against him — will be forced to contend with serious implications of this in the future. Of course, responsibility for the current situation cannot be placed entirely on Netanyahu’s shoulders. It is worth asking how all those people who call themselves senior Likud officials — Transportation Minister Yisrael Katz, Saar, Shalom and Internal Security Gilad Erdan — never mustered up the strength to run against him in the first place. The fact that they didn’t says something about them, too.

On Dec. 18, comedian Jerry Seinfeld asked US President Barack Obama, “How many world leaders, you think, are just completely out of their mind?” Obama answered, “A pretty sizable percentage. … Part of what happens is, these guys, I think the longer they stay in office, the more likely that is to happen.” The fact that Netanyahu is investing excessive efforts in his race against a blank ballot raises the possibility that in some way, Obama is right.