Despite increasing alcohol prices and draconian regulations for alcohol licenses, traditional and modern versions of meyhanes are flourishing, offering Turks a place to gather and share raki. 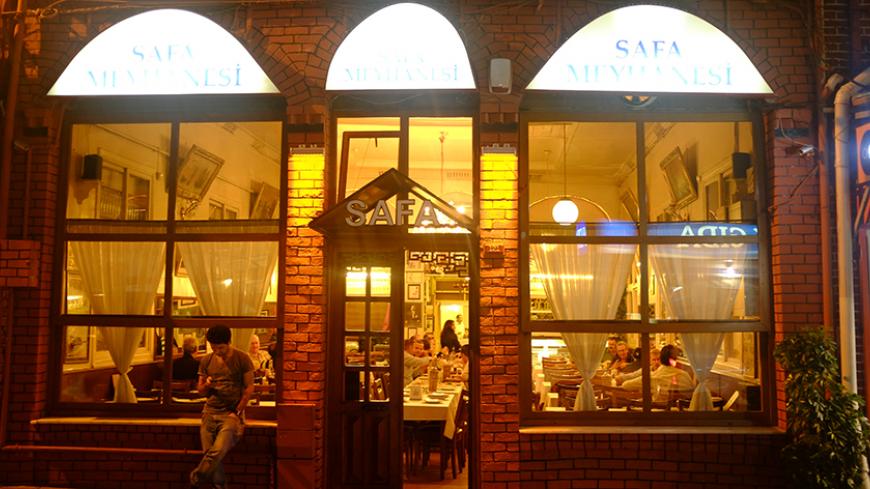 A view from the outside shows Safi Meyhane in the Sishane district of Istanbul, 2015. - Ufuk Kaan Altin

The moment you step out of Ataturk International Airport, you cannot help but wonder how Istanbulites keep calm in this chaos. One answer is centuries of meyhane tradition.

In any town that abuts the Mediterranean, you can see these rustic establishments. They serve "meze," small plates of seasonal fare to accompany local wines and liquors. Food is simple, fresh and in small portions to complement the drinks that inspire passionate conversation.

Meyhanes have faced periods of bans, yet they have endured. Oddly, the sultans, who had a weakness for wine, are known for placing the cruelest restrictions.

While everything Ottoman has been cherished by the neo-Ottomans of today’s Turkey, the Justice and Development Party leaders have made their dislike of alcohol quite clear.

Despite the government’s disapproval, meyhanes all over Turkey are experiencing a revival. In the face of increased regulations, social pressure and endless price hikes on alcohol, how is this possible? How do the traditional centers of pleasure and friendship survive?

"Meyhane" means the house of "mey," or wine. In time, mey has evolved to mean any drink that provides pleasure. Run by Istanbul's non-Muslims and located mostly around the shoreline, these meyhanes served wine until the 19th century.

Today, meyhane culture in Turkey has become raki culture, or "cilingir sofrasi." Cilingir sofrasi, literally “the table of locksmith,” is a passionately debated term. Some claim it is so called because raki unlocks the souls of those who sip it. Others argue it originates from the word "cesnicibasi," the Sultan’s food taster. Still others claim it mocks the drunk men who would go home, be unable to open their doors and need a locksmith. Though the origins of cilingir sofrasi remain debatable, its rituals are deep-rooted and firm. First and foremost, raki is not to be consumed alone.

“Go to the modern pub, the wine house, a restaurant if you want to drink alone,” said Ufuk Kaan Altin, a researcher on contemporary meyhanes and raki sommelier. Altin told Al-Monitor he believes that meyhane is a place for regulars, one of community and friendship. All meyhane aficionados agree that there are three must-haves: raki, meze and friends.

Raki culture takes years of learning. Traditionally, it was the domain of men. In the last century women have become a part of meyhanes, both as customers and patrons.

The basic rule of raki drinking is taking it easy. You cannot rush at the meyhane, goes the motto. There are no raki shots, no competition to drink fastest and most. You must sip the drink at your own pace, and don’t even think of filling up on the meze. The meze platters, small and to be shared, are not to end your hunger. It is best to come to the meyhane not too hungry for food or thirsty for drink, but for friends.

Raki, most experts concur, does not like ice. The anise-based 45% alcohol drink also known as “lion’s milk” tastes different depending on when and how chilled water is added, and should never begin with ice. A good drink of raki comes in two glasses, one pure water, the other just a bit more raki than water. Once water touches the raki, the clear liquor turns milky, cloudy. The younger people at the table are always to serve the older ones, even if they are guests. It is poor etiquette to clink glasses more than once. You can raise the glass one time with passion, but not more. You should be calm, respectful and level-headed.

If you want to know a man, most Turkish elders will tell you, travel with him to hajj or take him to a meyhane. Although for centuries, meyhanes have been places for lower- and middle-income men to relax and socialize with other male companions, most meyhane experts agree that women have always been there, at least in the background — in the stories, in the songs and the desperate love affairs.

Music has also been a major part of meyhane traditions. Known as "fasil," there are hundreds of meyhane songs. There are many different meyhanes from different eras, particularly in Istanbul. Greek, Armenian, Balkan and Arab meyhanes are usually known by the ethnicity of their owners.

Along with the old-time licensed meyhanes of Ottoman times, there were the both "koltuklu" and stand-up meyhanes. Koltuklu meyhanes were like bars, where men would visit on their way home from work. They would arrive around dusk to have a few drinks and nibble on simple meze and enjoy the company of other regulars. Some of these places would have no stools to sit, as they operated like speakeasies. There were also mobile meyhanes: simply a man with a big coat who had alcohol hidden on him, serving mostly blue-collar workers.

Raki is traditionally consumed after sunset. Early 20th-century meyhanes were dimly lit, smoke-filled rooms. Traditionally, patrons would start with some sort of cold olive oil dish to coat the stomach lining and delay the absorption of alcohol. Then yogurt-based dips would come to the table, the good bacteria in thick creamy yogurt helping to prevent upset stomachs. There would always be some sort of cheese, local specialties, grilled seafood or meat, and then tripe soup with garlic vinaigrette as dawn approached. Meyhanes were an all-night affair for hungry souls. The mezes were on the house, and customers were billed only for the drinks.

Times have changed. With today’s fast pace, who has the time and patience to sit in one place for a whole night? While barhopping has always been popular in Istanbul, since 2012, meyhane-hopping has also become trendy. These establishments are called neo-meyhanes, meyhanes of the new generation. Pioneer Safi Meyhane in the Sishane district of Istanbul has been in business since 2012 with the help of Mey Raki Company. These meyhanes have minimalist designs, high-profile chefs and gourmet mezes. Meze menus display ingredients from all over the world added to classic meyhane fare like Turkish spiced salmon jerky. But they are still just to nibble.

The music also is no longer fasil. It is more versatile, you can see a band singing Greek or Black Sea folk songs on a Saturday night, or nostalgic hits of the '80s and '90s. The crowds are mostly in their early 30s and 40s, white-collar, college-educated urbanites. The neo-meyhanes with their faster pace resemble the speakeasies of the previous century. More elegant, hygienic and global, they have many female patrons and customers.

Quite a few women now drink raki in Turkey. Ayse Kara told Al-Monitor at Ma’na Meyhane of Karakoy, “I come here because they have over 30 different types of raki. Every visit I try a new one.”

Raki expert Altin concurs, saying, “A good meyhane should be well stocked. From each raki brand, they should at least have one sample.” Ece Temelkuran, a prominent writer who also pens a column for a quite informative Web page about meyhanes, told Al-Monitor, “Neo-meyhanes were born in the quest to preserve the traditional for upscale customers. Some of them are quite successful, yet some risk appearing too sanitized and novel for raki culture.” Just having a nice ambiance is not sufficient for the neo-meyhanes to survive. Altin told Al-Monitor, “The passionate meyhanes, vintage or new, will survive.” Regardless, it is difficult to survive as a meyhane owner in Turkey.

So why must one never go solo to a meyhane? Al-Monitor asked this question repeatedly, but only one candid answer came from a meyhane aficionado and brilliant journalist. “The person who drinks alone at a meyhane is not viewed well by others, because it means he harbors unspeakable troubles, and that reminds the regulars of their own unhealed wounds.”