Key US allies get a funding boost while Congress holds the line on visa waivers and Palestinian penalties. 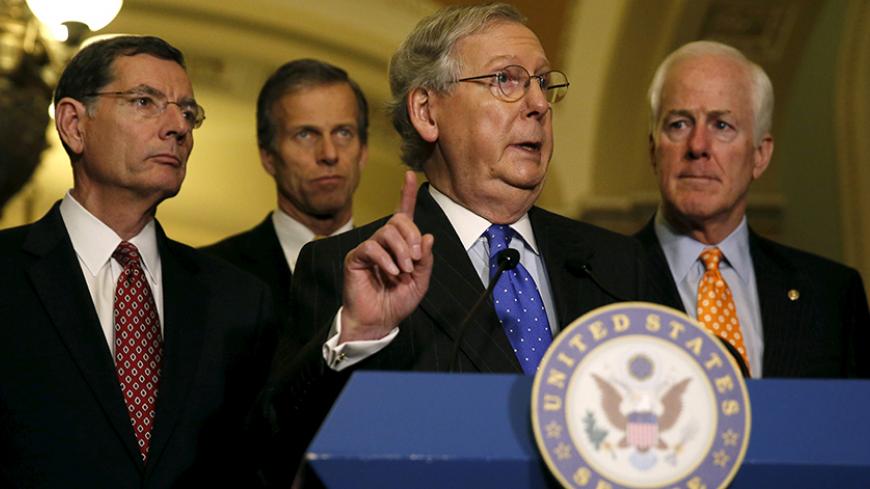 America’s Arab allies got gifts of gold while Iran and the United Nations got a stocking full of coal from the congressional Santa Claus.

House and Senate budget negotiators unveiled a $1.1 trillion FY2016 spending bill in the early hours of Dec. 16 that boosts support for countries on the front line of the fight against terrorism. Meanwhile, lawmakers held the line on tightening the rules for visa-free travel to the United States for dual citizens of Iran and punishing UN agencies that recognize Palestine as a state.

Despite a flurry of last-minute calls from Secretary of State John Kerry and US ambassador to the UN Samantha Power, lawmakers declined to allow the State Department to resume funding to UNESCO. And the so-called “omnibus” adds new restrictions on funding for the UN Human Rights Council by requiring that the council first take “steps to remove Israel as a permanent agenda item.”

One of the biggest surprises in the bill was a $142 million allocation for Tunisia, which has struggled to live up to its promise as the Arab Spring’s sole success story. The Senate had resisted signing off on the State Department’s $134 million request, but in the end appropriators ended up giving the terrorism-plagued nation the full amount and then some.

Jordan also fared remarkably well, with a $1.275 billion allotment — 25% more than what the State Department had requested. Egypt, meanwhile, gets mixed results: The bill retains the $1.3 billion in annual military aid but sets new conditions for its release, which the secretary of state may waive for national security reasons.

“We are pleased to see the final bill will require an updated assessment from Secretary Kerry on the state of democratic reform and human rights in the country before some of Egypt's military aid can be delivered — it may compel the Sisi government to make some improvements in these areas, and at a minimum that report is a very valuable source of information for Congress on the degree of such progress in Egypt,” said Cole Bockenfeld, deputy director for policy at the Project on Middle East Democracy in Washington. “And moving forward, the omnibus language will require the administration to consult with Congress on plans to restructure Egypt's military assistance — a step that is long overdue for Egypt's outdated aid package.”

As predicted, hawkish lawmakers were unable to include language temporarily halting the arrival of refugees from Syria and Iraq. The House easily passed such legislation last month, but President Barack Obama had threatened to veto the bill, arguing that accepting up to 10,000 Syrian refugees over the next nine months helps in the propaganda fight against the self-proclaimed Islamic State.

As a compromise, budget negotiators incorporated language into the omnibus that would bar dual nationals from Iraq, Syria, Sudan and Iran — as well as people who have visited those countries since March 1, 2011 — from gaining visa-free access to the United States. Civil liberties and Arab- and Iranian-American groups have denounced the measure as discriminatory and a potential violation of the nuclear deal with Iran.

“There's two big concerns,” said Tyler Cullis of the National Iranian American Council. “First, Europe could reciprocate the US measures — particularly against US travelers to Iran — in ways that undermine attempts to build bridges between Americans and the Iranian people; and second, by excluding European business-travelers to Iran from the US' visa-waiver program, Congress puts the US in violation of its commitments under the JCPOA [Joint Comprehensive Plan of Action] to refrain from any action that would interfere with the normalization of trade and economic ties to Iran.”

The bill does give the Department of Homeland Security leeway to waive those restrictions if doing so “is in the law enforcement or national security interests of the United States.”

Congress is expected to pass the spending bill on Dec. 18 as its last order of business before leaving town for the Christmas holidays.