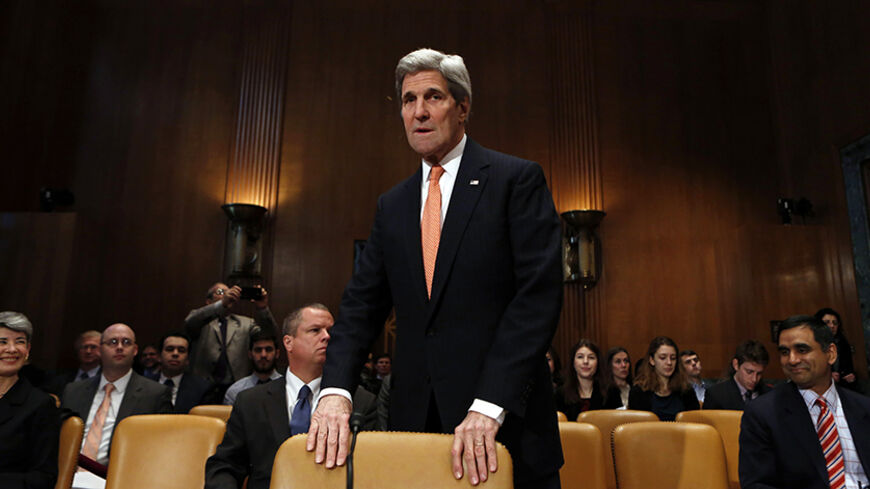 Secretary of State John Kerry arrives at a Senate hearing to review the funding request and budget justification for the State Department on Capitol Hill in Washington, Feb. 24, 2015. - REUTERS/Yuri Gripas

WASHINGTON — US lawmakers did not raise any objections to a proposed $1.3 billion military assistance package for Egypt during two days of hearings with Secretary of State John Kerry. Their silence is the clearest sign yet that Congress is lining up behind President Abdel Fattah al-Sisi as he takes on Islamic State (IS) and other Islamists.

The lack of questioning stands in stark contrast with the past few years, when US assistance to the Muslim Brotherhood's Mohammed Morsi — and to Sisi after the former military chief overthrew him — dominated State Department budget hearings. Even as recently as December, top lawmakers writing the annual spending bill clashed over the conditions for restoring military aid and whether to give Kerry the authority to waive provisions requiring him to certify Egypt's progress on certain democracy and human rights standards.

Military aid "has been a big part of the budget debate every year — except this year," said Cole Bockenfeld, advocacy director for the Project on Middle East Democracy. "For a lot of people, there's an all-encompassing focus on getting Egypt in the fight and making any and all concessions needed."

This time around, the few lawmakers who mentioned Egypt at all grilled Kerry on getting military aid out the door faster.

We have seen "the administration continue withholding equipment to Egypt that would help them combat [IS] and other threats," the chairwoman of the House panel with jurisdiction over foreign aid, Rep. Kay Granger, R-Texas, told Kerry during a hearing Feb. 25. She sent him a letter last week threatening to withhold other aid if the State Department doesn't give Egypt F-16 fighter jets and M-1 Abrams tanks that have been held up since 2013.

"I think we see Egypt as an ally against [IS]," Frankel said. "And so the question is why do we continue to withhold financial support?"

Kerry indicated that a decision to release more aid is imminent.

"We're pushing very hard and that's a decision that I think is on the president's desk anytime now," he told Granger. "By and large, I believe it's important for us to provide some of these items and I believe decisions will be forthcoming that will set out how we proceed forward to do that."

He said the recent announcement of parliamentary elections, scheduled for March and April, was a step in the right direction. But he expressed concern with the sentencing this week of prominent activist Alaa Abdel Fattah to five years in jail and the trial of Al Jazeera journalists on terrorism-related charges.

Human rights advocates see the lack of congressional opposition to military aid as evidence that Sisi's effort to play up Egypt's role in fighting IS, first in Sinai and now in Libya, has largely paid off.

As far back as September, the Egyptian leader told CBS that the United States should release the weapons it had been holding up if it wanted to see Egypt play a greater role in the fight against IS.