Salehi reveals new details of secret US, Iran back channel

In an extensive interview, Ali Akbar Salehi, Iran's atomic chief and former foreign minister, reveals new details of the secret back channel to the United States. 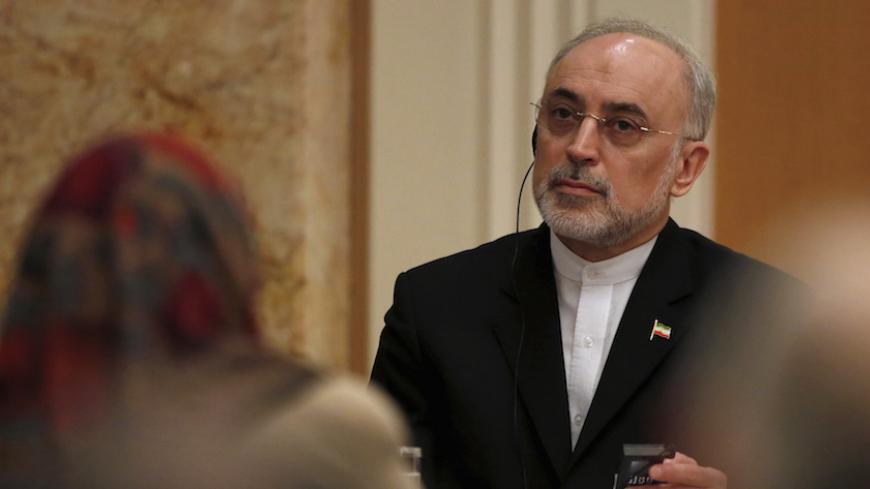 Over the past two years, Al-Monitor has broken the story of secret back-channel negotiations between Iran and the United States via Oman. According to US sources who have spoken to Al-Monitor, these contacts were initiated in 2011 and 2012, when Puneet Talwar, the National Security Council's senior director for the Persian Gulf at the time, and Jake Sullivan, deputy chief of staff to Secretary of State Hillary Clinton, participated in lower-level, “preparatory” meetings with the Iranians, facilitated by the Omanis, to see about the prospect of a bilateral channel led on the US side by William Burns. Subsequently, such higher-level talks were held in March 2013, three months prior to the June election of Iranian President Hassan Rouhani.

Now, the Iranian foreign policy magazine 'Diplomat' has published a three-hour interview with Ali Akbar Salehi, who served as foreign minister from December 2010 until August 2013. Of note, Salehi currently holds the title of vice president and heads the Atomic Energy Organization of Iran. The MIT-educated nuclear physicist played a key role in securing the July 14 Joint Comprehensive Plan of Action, leading the technical track with his US counterpart Ernest Moniz.

Al-Monitor has obtained the full transcript of Salehi’s interview, which includes so far unknown details of the secret US-Iran back channel on the nuclear issue — and how it was initiated.

According to Salehi, Iran first became aware of an American desire to meet bilaterally “in mid-1390” in the Iranian solar calendar, which corresponds with late summer of 2011. He said that Hassan Ghashghavi, then (and current) deputy foreign minister for consular and parliamentary affairs, who is in charge of pursuing the cases of Iranians jailed abroad, paid a visit to Oman. Specifically referring to the case of former Iranian Ambassador Nosratollah Tajik, who had been arrested in Britain in 2006, Salehi noted, “Through the support and cooperation of the government of Oman, and especially the sultan, we were able to free" these prisoners. Of note, two American hikers, detained in Iran in 2009, were also released via Omani mediation, on Sept. 21, 2011.

In this vein, Salehi said, "An Omani individual by the name of Mr. Salem told one member of Ghashghavi's delegation that the Americans wish to hold bilateral negotiations on the nuclear issue. That director prepared a memo for me on this matter," clarifying that it was not an Omani memo, but that “Mr. Salem,” whom the magazine Diplomat described as an adviser to Sultan Qaboos of Oman, had orally conveyed the suggestion. Salehi added, "Mrs. Clinton was secretary of state and Mr. Kerry was head of the Senate Foreign Relations Committee. But at that time, it was toward the end of Mr. Obama's first term, and we did not take this message seriously." Saying that it was "unclear" whether the message came from the White House or the State Department, Salehi said, "[The Omanis] said [the message] came from the Americans. … We did not take the message seriously. One of the reasons was that negotiations with the Americans at that time was not a reasonable act." He further explained, "First, we said who [among us Iranians] can go negotiate with the Americans? Second, we did not know whether the message really came from the US government or whether it was an effort by the Omanis or whether the Omani individual [Mr. Salem] had come up with the message himself.”

In a further twist, Salehi relayed the involvement of a senior Iranian business official in helping to establish the back channel. “Some weeks later, Mr. [Mohammad] Souri, who at that time was the managing director of the National Iranian Tanker Company [NITC], traveled between Iran and Oman for a trade agreement. … At that time, Mr. Salem got in touch with Mr. Souri and said now that the Americans are interested, why is Iran not responding? Mr. Souri conveyed that Mr. Salem announced that if we are ready, [Oman] is ready to be a facilitator.” Salehi emphasized that this was the moment when Iran “understood that the matter [of the American request] is serious.”

Salehi further explained the seemingly crucial role of the NITC director in helping jump-start the back-channel diplomacy. “After that, Mr. Souri said that now that he is coming and going to Oman, to let him know if we have anything we want said. I told him, ‘Mr. Souri, we are not very sure about this process, but if they [the Americans] are really serious about holding negotiations, our demands are the following,' and I wrote down four demands by hand. The first was recognition of Iran's right to enrichment, while the other three demands were for example steps to lift sanctions and other matters in this vein … all conditions were related to the nuclear issue. I said that if they [the Americans] first express readiness to address our demands, we are also ready. Second, we wanted the Americans to officially express this readiness. … I said ‘a handwritten [note] by one of our directors or an oral report by an Omani official is not [considered] official.’ Mr. Souri wrote down my request as demands from a representative of the Islamic Republic of Iran. The letter was then given to Mr. Salem.”

According to Salehi, following his request for more formality behind the American proposal, the sultan of Oman wrote a letter addressed to Iran’s Supreme Leader Ayatollah Ali Khamenei. “It was in this letter that it became apparent that the Americans really want to enter a serious dialogue. … After this letter was received, I got in touch with the office of the supreme leader, and I told Mr. [Asghar Mir] Hejazi that such a letter exists, and how I should deliver it. Mr. Hejazi said he will let me know. He later got in touch and said that we should give the letter to Mr. [Ali Akbar] Velayati. I gave the letter to Mr. Velayati and he delivered it to the supreme leader." Salehi also said that Mr. Souri separately conveyed from the Omanis that the Americans were ready to hear the response to the letter.

In Salehi’s telling, the letter from the sultan was sent in fall 2011, and “until the end of 1390” in the Iranian solar calendar, which corresponds with September 2011-March 2012, “Mr. Souri came and went [to Oman] and became an exchanger of messages."

Salehi further noted that he did not tell anyone about the letter, including then-President Mahmoud Ahmadinejad, arguing that at that time, “the matter was not serious and not something to be told to the president. First I had to certify the seriousness of the matter to myself, to then inform the president."

Salehi said, “[At that time], an authorization for negotiations with the Americans had not been given. Within the framework of the P5+1, which included the presence of a US representative, yes, but not within a bilateral setting.” However, he noted that direct engagement was authorized, albeit on one regional matter, back in 2007. “At that time, Iraqi officials requested from Iran, in order to address issues that had risen in Iraq, for us to negotiate with the Americans. … ‘Aqa’ [Khamenei], in relation to negotiations in Iraq, gave a special authorization, and our ambassador [to Baghdad], Mr. [Hassan Kazemi] Qomi, conducted the negotiations, which did not lead to a conclusion."

Of particular note, Salehi also conveyed his conversation with Khamenei regarding the letter from the sultan of Oman and the line of reasoning that he adopted to convince the supreme leader to authorize a direct channel with the Americans.

Salehi said, “I told the supreme leader, ‘Considering that for several years, we have been negotiating through the [P]5+1, and we have in practice not reached a conclusion. Now, considering that Oman has also announced its readiness, and experiences have shown that Oman is a trustworthy mediator, allow us to take steps through bilateral negotiations with the United States.’ [In response], the supreme leader noted the past of the Americans, that the United States is not trustworthy, that we have done this [directly engaged] several times, but that their [American] officials are not bound to their own commitments and easily make decisions that are outside their commitments.”

Salehi said that at this point he argued to Khamenei, “If we reach a conclusion, then nothing, and if not, we will be in the same situation … and we will know that the establishment has taken all measures to solve things peacefully, and people will also know that the establishment was ready for negotiations and that it was the Americans who refused." Following this line of reasoning, Salehi said that Khamenei then responded that he was not opposed to bilateral negotiations with the Americans — but that he did not grant a carte blanche.

While it has previously been reported that then-Deputy Foreign Minister Ali Asghar Khaji — now ambassador to China — headed the Iranian delegation, apparently in line with Khamenei’s condition that engagement be below minister-level, Salehi also revealed the other members of the Iranian delegation that traveled to Oman. Reza Zabib, who currently serves as ambassador to Cyprus, accompanied Khaji while serving as director general of the North America Bureau of the Iranian Foreign Ministry. Moreover, Salehi revealed that Mohsen Baharvand, who currently serves as deputy secretary-general of the Asian-African Legal Consultative Organization in India, met with the Americans while serving as deputy director general for Latin American Countries at the Iranian Foreign Ministry.

Salehi also conveyed that in the first meeting with the Americans, the US side “didn’t believe our seriousness to the extent that they said that we are not ready for negotiations. Our representatives then said, 'So it is true what they say about you not being trustworthy!' Yet, in the first session, the framework and road map was explained.”

According to Salehi, the first meeting took place “at the end of the spring of 1391 … meaning four to five months after the supreme leader’s authorization [of direct negotiations].” This corresponds with the reported July 7, 2012, meeting in Oman attended by Sullivan and Talwar, but not Burns. According to this timeline, Iran’s supreme leader formally authorized bilateral talks with the United States in early 2012, some 18 months before the election of Rouhani.