Is Netanyahu the 'great gas robber'? 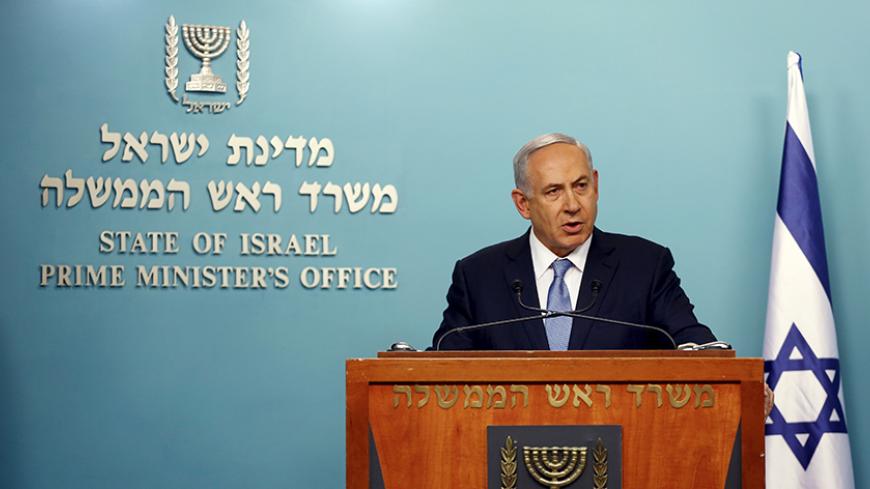 “There is no question about it. You know how to talk, but we never did get the answers we asked for.” That is how Eitan Cabel, Zionist Camp member and chairman of the Knesset’s Economic Affairs Committee, jokingly summarized his committee’s discussion about the distribution and benefits of the pending natural gas outline. Cabel was addressing the star witness of the Dec. 7 meeting, Prime Minister Benjamin Netanyahu. By that point, humor seemed to be all that Cabel had left. Together with the other opposition members, he had lost all hope of getting direct responses from Netanyahu, who sat before the committee by virtue of also holding the economic affairs portfolio for the sole purpose of “defending” the controversial gas outline.

The Knesset members had lots of interesting questions for Netanyahu, like the one by Zionist Camp's Shelly Yachimovich about why Netanyahu claims that the gas has yet to be extracted when the Tamar reserve has been producing gas for two years now. Those who expected him to actually answer such questions were deluding themselves. Netanyahu had no intention of falling into such a trap with the cameras rolling.

Netanyahu had walked into the committee room accompanied by an entourage of some 20 people, the most prominent being the incoming Mossad chief, Yossi Cohen. Yet, he had no plans to provide answers to the committee's questions from the get-go. He stayed on script and repeated his talking points, which focused on security and diplomatic arguments. He seemed to be enjoying every minute of it. Yachimovich was right when the following day on a Channel 10 morning show she said that there was considerable value also in the questions that were asked but remained unanswered.

The prime minister arrived at the committee after many long months of public and political debate over the gas outline. Israel has never faced an economic issue as complex as this one or one subjected to such intense media scrutiny. Opponents of the gas deal claim that it is nothing more than the theft and robbery of a public resource that belongs to all Israelis but Netanyahu is handing to the country’s gas tycoons as a gift. Although Netanyahu wants to see the gas deal approved, he has been forced to spend the past few months managing unexpected hitches, like the resignation of Antitrust Commissioner David Gilo, who opposed the deal. This setback was followed by the refusal of Shas Chairman and then-Minister of Economic Affairs Aryeh Deri to sign the deal, the only person with the authority to do so apart from Gilo.

Netanyahu overcame this hurdle by cobbling together a deal with the Shas chairman: Deri resigned as minister of economic affairs in exchange for heading the Ministry for the Development of the Negev and the Galilee, and Netanyahu took the economic affairs portfolio. This laid the groundwork for the outline’s approval. Of course, Netanyahu's new ministerial position obligated him to appear before the Economic Affairs Committee to explain why he thought the gas outline was good for the State of Israel.

As noted, Netanyahu had absolutely no plans to get into a debate with the committee members. Instead, he did what he does best, no matter the topic at hand. He transformed the security argument into the be-all and end-all of his case. He pulled out one and then another argument on “energy security” and even produced a classified document from the Israel Defense Forces (IDF) Intelligence Department stating that priority should be given to the development of the Leviathan gas field, because it would help provide stability to the region. The document even went so far as to claim that it would improve the IDF’s operations in wartime.

At one point, Netanyahu looked around at the people in the room and explained that Israel could no longer afford to have just one power station because of its vulnerability to missile attack. The way the prime minister delivered his argument, with the requisite dose of intimidation, went like this:

Let’s assume that we had just one power station. … We would provide it with the highest levels of protection, because if you were able to damage this vital link, you would bring the whole state crashing down. … By the way, the site already came under direct missile fire, and the missiles fired at us are expected to get even more sophisticated. … Imagine that everything relied on that single power station. It would be foolish on our part and very dangerous. It shows a lack of responsibility. The same is true about the gas platforms. The platforms are the most vulnerable. They are much more vulnerable than a gas pipeline or an underwater gas field. The platforms are a target for missiles and can be hit by other means too. … This outline is the only way that we can create the essential redundancy of having several fields, rather than limiting ourselves to a single field that is under threat.

On the other side of the debate were opposition Knesset members who oppose the gas deal, headed by some of the more combative female Knesset members: Yachimovich and Stav Shaffir from the Zionist Camp and Tamar Zandberg of Meretz. They came prepared with questions concerning the public interest and a request to disclose the kinds of pressure the gas tycoons used on the prime minister behind the scenes.

One of the most important questions asked, and which remained unanswered, was why the State of Israel had decided to sign a 10-year agreement with the gas companies if its interest was to maintain maximum geopolitical flexibility. Then there was the question of who would have the final word on export agreements to ensure that they serve Israel’s diplomatic interests and not just the interests of the corporations. Of course, there was the question of why the deal fails to require the construction of a second platform, which would provide competition. In regard to the discovery of gas reserves in Egypt, Netanyahu was asked whether diplomatic and security considerations should be reviewed as a result, particularly given Egypt’s refusal to acquiesce to the ruling of international arbitrators, following Cairo's decision in 2011 to halt gas exports to the Israel Electricity Company, and return $1.8 billion to Israel.

These and other similar questions are complex, as is the gas issue in general. It is difficult to present the many facets to the public in easily digestible bites. Inevitably, this places the essential points in direct contrast to the prime minister’s catchy, simple message positing that the gas outline is vital to the country’s security interests.

Although Netanyahu and his entourage left the meeting feeling good about themselves, it is unfortunate that the Israeli public did not get the answers that would have helped it understand whether the implementation of the outline in its present form would hurt its economic interests. Is it really the best compromise available, as the prime minister is disposed to say? Will it really increase security? The lack of clarity surrounding the issue remains as it was before the meeting.

Opponents of the gas deal have presented significant arguments against it. They refer to it as the “great gas robbery” and claim that it is mired in corruption. Given this, the Supreme Court will play a major role in the public debate. It will receive petitions against the outline as soon as the minister of economic affairs — that is, Netanyahu — signs it. Once it reaches the Supreme Court, all the questions that Netanyahu avoided will be raised once more. Maybe then the public will finally be in a position to decide whether there is any truth to the claim that the government sold them out to the gas tycoons. A ruling in that spirit could reignite social protests.