Iranian parliament Speaker Ali Larijani is trying to transform the Followers of the Leader faction into a political organization. 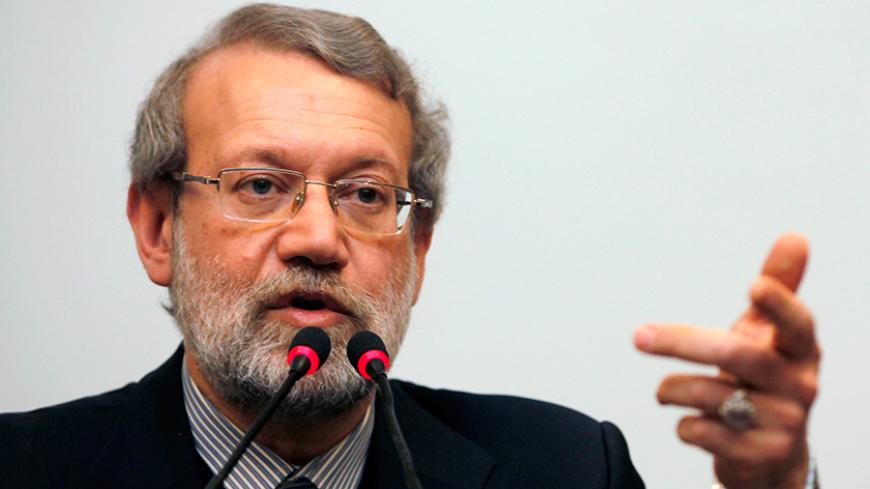 On the occasion of Parliament Day, Majles Speaker Ali Larijani spoke to reporters about his hope to establish a new political organization, the February 2016 elections and US-Iranian relations. Larijani said that he is trying to create a political organization out of the Followers of the Leader, a parliamentary faction. With approximately 170 members, it is the largest faction in the 290-member parliament.

The Followers hold key positions within the parliamentary leadership and on important committees. While technically a conservative group, it has supported moderate policies and has been instrumental in its backing of the administration of President Hassan Rouhani. If allowed to form a political organization, the group would have greater organizational capabilities outside parliament to recruit members, develop a leadership structure and launch its own newspapers and media outlets.

Larijani said that official campaigning has not yet begun for the 2016 parliamentary elections, but that some of the political blocks are already engaged in organizing activities. Iran does not have official parties, and the various factions and political groups at times have fluid memberships. Addressing this issue, Larijani said, “The structure of elections in the country is more MP centered than party centered.” He also said that the categorization of “conservative, Reformist and moderate” is inaccurate in today’s political climate.

On reports that he might form a political coalition with Reformists, Larijani said, “I have also heard this in the media, but it has been nothing more than [media reports].” On whether Reformists have attempted to “appropriate” conservatives such as himself and Ali Akbar Nategh-Nuri, he said, “We are not property to be appropriated … They should not think this way.” Based on the transcript, it was not clear whether the journalist had intentionally asked a leading question, but many hard-liners are concerned that Reformists might attempt to use the political backing of moderate conservatives to enter parliament.

Larijani confirmed that he had met Nov. 25 with Ali Akbar Velayati, foreign policy adviser to the supreme leader, Ayatollah Ali Khamenei, Nategh-Nuri and Ayatollah Morteza Moghtadai, deputy chairman of the Society of Seminary Teachers at Qom. The conversation revolved around finding “qualified individuals for parliament” to address domestic issues. According to Larijani, although Iran has been doing well regionally and internationally, “economic issues require more attention.”

Some analysts believe that the meeting was held to discuss a strategy to “eliminate extremists” from the next parliament, in particular members of the hard-line Endurance Front who have repeatedly clashed with Larijani in the legislature.

Larijani spoke positively about this parliament’s cooperation with the current administration. “There are brotherly relations between the two branches,” he said. “This administration has observed the law much better.” Larijani had had such a contentious relationship with President Mahmoud Ahmadinejad that the latter once played an audio recording on the floor of parliament accusing Larijani’s brother of being involved in a bribery scandal. Larijani added that while relations are better with the Rouhani administration, “the independence of the branches must be protected.”