How these Israelis gave the biggest gift of all 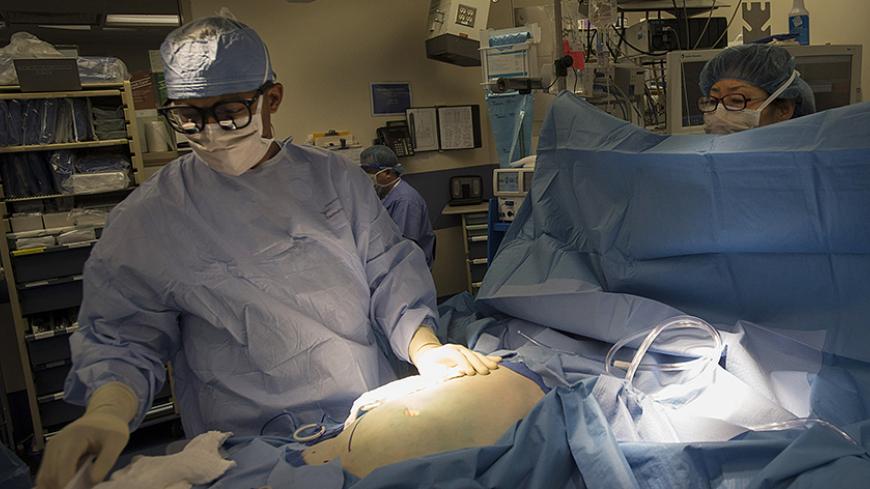 If anyone still had any doubt, at the beginning of the month it became clear to all that Rabbi Yeshayahu Heber's life work has been successful. On Dec. 6, the Matnat Chaim (Gift of Life) organization mediated its 250th kidney transplant, donated by a stranger out of the desire to help.

Heber founded the organization eight years ago after he suddenly became ill with kidney disease. In a moment, his life changed. He had to undergo intensive dialysis treatment three times a week, for four hours at a time. These treatments were very tiring and greatly affected his quality of life. When he finally underwent a kidney transplant, he decided to devote his life to encouraging donations and connecting donors to those in need.

“While in treatment I met Pinchas Turjeman, who was 19. He told me that he already had a kidney transplant, but three years before we met his big brother was killed in the Second Lebanon War, and in his mourning he neglected to care for himself. As a result his body rejected the kidney, and he’s had to return to treatment and wait for another kidney,” Heber told Al-Monitor.

The rabbi grew close to the young man, and together they endured the difficult treatments while studying the Torah. After he received a kidney, Heber decided to find his young friend a donor as well. Pinchas passed away shortly after a potential donor was located for him.

“On the day he died the organization was born,” Heber said. Since then he has worked to explain the process of organ donation to the public and to encourage people, especially from the religious and ultra-Orthodox sectors, to donate a kidney to someone who needs one. “I thought that the risk and sacrifice involved in donating a kidney are less than those of serving in the security forces, for instance. And here saving life is a certainty,” Heber added.

The organization focuses on the religious sector for several reasons: It is considered a sector that places great value on giving to society; advertisement in the sector’s newspapers is cheaper than in the national press; and Heber feels closest to this group. In addition, it offers a way for religious Jews to get past the problem Jewish law poses for donating organs after death. Brain death is not considered death under Jewish law. Therefore, it’s not permitted to harvest organs from someone who is brain dead, as doing so would be considered murder. Thus, many believers are not willing to donate their organs or those of their family members in this scenario.

Gabi Ravivo, 36, a father of six, was motivated by other considerations to donate a kidney to Lior Mosloui, just a few years younger than him and also a father.

“I worked as a paramedic for many years and knew what kidney disease was like. I told myself that there are so many diseases with no cure, but here you can really cure someone and get him back to an ordinary life. I thought about it for a long time, until two years ago. I met a patient who was close to a friend from work and decided to go for it.”

After he submitted his candidacy to Matnat Chaim, he went through a long series of medical and psychological exams. “Among other things, they have you meet with a committee from the Ministry of Health that includes a social worker, a psychologist, a judge and a lawyer, and all of them stand before you and try to make sure that you’re not an organ dealer and you have to convince them you’re not crazy but really just want to help.”

Israeli law forbids organ donation in exchange for money, and the state only covers the cost of the procedure and work missed following the surgery.

“Until the last moment, they allowed me to change my mind, but I was fine with it,” Ravivo told Al-Monitor. He showed his children, who were then 12 and 13 years old, a video on YouTube that explains kidney donation and asked their opinion. “When my daughter understood that I intended to donate she started to cry and hugged me, and afterward she sent me a message that said, ‘I thought only women could give life.’ And that was ‘wow,’ I was really emotional.” He told his parents only two months before the surgery, when they came to say goodbye to him before he left to fight in Operation Protective Edge in Gaza. His mother was shocked, but his father was unsurprised.

The person who worried the most was the patient awaiting the kidney. He knew he had a potential donor who had gone to battle in Gaza.

“There were two really tense months, when you’re waiting to finally get back to normal life and afraid of disappointment. He told me he’s going on army reserve duty and I was anxious about it, that he would return safely, that he’d be healthy, that nothing would happen to him. I thought about a lot of things, lots of fear,” said Lior Mosloui, who received Ravivo's kidney.

He said that people don’t know the difficulty of kidney disease and dialysis treatment. “In the middle of my life I got sick, and suddenly I can’t drink more than one glass a day, because the body doesn’t produce urine. Only through dialysis does the body empty the fluids it’s accumulated and so forth.”

“I came to the hospital a short time after his surgery. The energy in the room was amazing, to see Gabi and Lior next to each other — it was amazing, and right then I decided that I’m also going to do it,” Dubi said. According to him, you really have to be committed to the process because it’s very long, with “exams, hospitalizations, committees, lots of running around.” But, he added, at no point did he have any doubts.

Two months after donating, Ravivo ran a marathon. “To see it through his experience made everything easier,” noted Dubi. The brothers’ father also volunteered but is unable to donate at his age. Dubi doesn’t like the publicity surrounding the donation but agreed to it to raise awareness. “If people knew what’s involved in donating a kidney and how simple it is, we would eliminate the waiting list of 800 people who need a transplant within a week,” he said.

While it’s clear that raising public awareness is complicated, the people behind Matnat Chaim are optimistic. In its first two years the organization recruited only 11 donors, but by the end of 2015, more than 90 people will have donated a kidney to a stranger. Matnat Chaim allows donors to make special requests for recipients — subject to medical suitability, of course. One of the stories that moves Heber is that of a female donor who couldn’t have children, and after decades of trying to get pregnant, donated a kidney to a young man so that he could have them.

“She gave the kidney to a 19-year-old, who since then calls her ‘Mom.’ She says that … it was the first time anyone has called her Mom.”