Why is Israel recruiting so many Jordanian workers?

Israel is recruiting hundreds of Jordanian workers and dismissing some Palestinians from their jobs, raising questions about Israel's motivation. 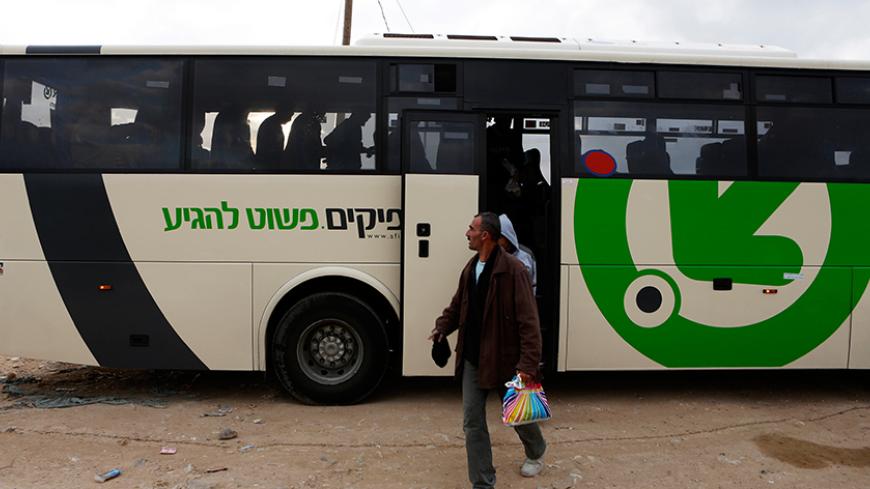 Laborers disembark from a bus before crossing through Israel's Eyal checkpoint as they return from work sites in Israel, near Qalqilya, March 4, 2013. - REUTERS/Baz Ratner

Many Palestinians are wondering why Israel is replacing Palestinian workers with ones from Jordan. None of the speculation seems positive.

In light of ongoing Palestinian armed operations against Israeli settlers, Israel has been taking punitive measures against Palestinians. When the violence began in October, Israel decreed that Palestinians could not travel to their workplaces inside Israel. It would not issue new work permits. On Oct. 4, Israeli Minister of Transportation Yisrael Katz threatened to withdraw more than 100,000 work permits.

However, the Israeli Security Agency (Shabak) opposed those government decisions and on Nov. 26 demanded that additional work permits be granted for Palestinians. The move was seen as one designed to keep Palestinian workers employed so they wouldn't join unemployed Palestinians in their attacks against Israelis.

On Dec. 2, Hebrew radio Kol Israel announced that the number of Jordanian workers in Israel had recently increased from 150 to 500, in a step by the Israeli Ministry of Labor to prepare for the upcoming recruitment of 4,000 Jordanian workers.

The beginning of the influx of Jordanian workers to Israel coincides with a report issued Oct. 24 by the Jordanian Department of Statistics. The report pointed to the high unemployment rate of 13.8% among Jordanians, while 50% of jobs in the Jordanian labor market are occupied by foreign workers. Why would Jordan send its workers to Israel, while it brings foreign workers into its territory? What is the reason behind such a move?

Maysara Malas, former deputy head of the Higher Executive Committee for Anti-Normalization with Israel in Jordan, told Al-Monitor, “Jordanian workers in Israel feel bad about working there, but they claim that there are no job opportunities in Jordan, where the unemployment rate is high."

Malas added, “We understand why Palestinians would want to work in Israel, although it is occupying them, as they have no other job opportunities. However, the Jordanian government is responsible for this situation, which all Jordanian businesses condemn, as the Jordanian government is coordinating with Israel on economic, security and political levels. Jordanian employees cannot work in Israel without the knowledge of the Israeli government, even if the latter claims it was unaware of their employment, which does not seem convincing."

Hamada Abu Nijmeh, secretary-general of the Jordanian Ministry of Labor, announced Nov. 22 that the ministry was not responsible for sending Jordanian workers into Israel, and blamed the Aqaba Special Economic Zone Authority (ASEZA), which was established in 2001 by the Jordanian government to promote international tourism and attract investment.

ASEZA had already denied that it had anything to do with the issue. However, on Dec. 15, ASEZA visa director Wassim Jarabiya confirmed to Radio al-Balad that the city of Aqaba had signed an official protocol with the Israeli city of Eilat under which Jordanians would be sent to Eilat to work in construction.

It seems strange that a government agency would deny its involvement, as the decision to send Jordanian workers to Israel can’t take place without the knowledge of the Jordanian government or the parties affiliated with it, such as the Ministry of Labor.

Thus the question arises: Why didn't Jordan consult the Palestinian Authority (PA) before agreeing to send workers, so Palestinians would not interpret the act as Jordanian acceptance of Israeli's policies toward them?

The Israeli step to recruit Jordanian workers coincides with the dismissal of dozens of Palestinian workers from their jobs in Israel. Al-Monitor contacted some of these Palestinian workers. One of them, Imad Hussein from Tulkarm, told Al-Monitor, “It is not acceptable that the brotherly state of Jordan agrees to send its employees to Israel to replace us. Jordan should have supported us in our current crisis.”

Ismail Rashid, from Ramallah in the West Bank, a contractor who recruits Palestinians for construction jobs in Israel, told Al-Monitor, “It is strange that the PA did not contact Jordan to coordinate at the level of exporting Jordanian labor in Israel. It is also strange that the PA did not ask Jordan not to replace Palestinian workers with Jordanian ones. The PA is responsible for these workers who lost their source of income and have been added to the ranks of thousands of unemployed people.”

Shaher Saad, secretary-general of the Palestinian General Federation of Trade Unions, told Al-Monitor, “There is an Israeli policy to dismiss Palestinian workers to blackmail the Palestinian people and put pressure on the PA to make political concessions related to halting the intifada. Israel’s recruitment of 500 Jordanian workers comes as a prelude to dispensing with thousands of Palestinians. ... I expect our Jordanian brothers to recognize that Israel’s policy aims to pressure us by attempting to dispense with our services and replace us with Arab workers."

On Dec. 1, Maher Abu Teir, a Jordanian writer with close ties to decision-makers in Amman, said specialized Jordanian companies — whose names he did not mention — are involved in arrangements with Israel to send Jordanians to work in Israel, for a monthly salary of $1,000, which is relatively low.

It seems that Israel's goal of recruiting Jordanian workers is not limited to the economic aspect, but also includes political considerations in light of the gradual rapprochement in Israeli-Jordanian relations. Thus, the PA expressed its concerns Oct. 26, in the wake of the Amman-Tel Aviv agreement reached Oct. 25 about arrangements related to the Temple Mount, which the PA was not involved in. The arrangements were related to installing surveillance cameras on the Temple Mount to watch the Muslim prayers and the Israeli settlers who enter the holy place.

Adnan al-Sawair, a Jordanian MP and former chairman of the Parliamentary Action Committee, noted Nov. 18 that Israel benefits from Jordanian workers in many ways. For example, many Israelis are not willing to travel the distance to work in Eilat because its lies in the extreme south of Israel. However, Jordanian workers gather there.

It seems Israel is trying to strengthen its relations not only with prominent Jordanian politicians and businessmen — who benefit from the free trade zone developed between Israel and Jordan in November — but with the Jordanian public as well. By doing so, Israel apparently also seeks to show the world that it is more than just an occupying state of the Palestinian territories.

At the same time, the decision may also mean that Israel is turning its back on Palestinians, in response to the increasing Israeli calls in the past few weeks to separate from Palestinians and close all job opportunities for them. This decision may have negative repercussions, leading to more Palestinians criticizing Israeli policies and possibly joining the Palestinian uprising.