The Israeli right has been busy turning every reasonable action by the Zionist left into yet another instance of treason against the homeland. 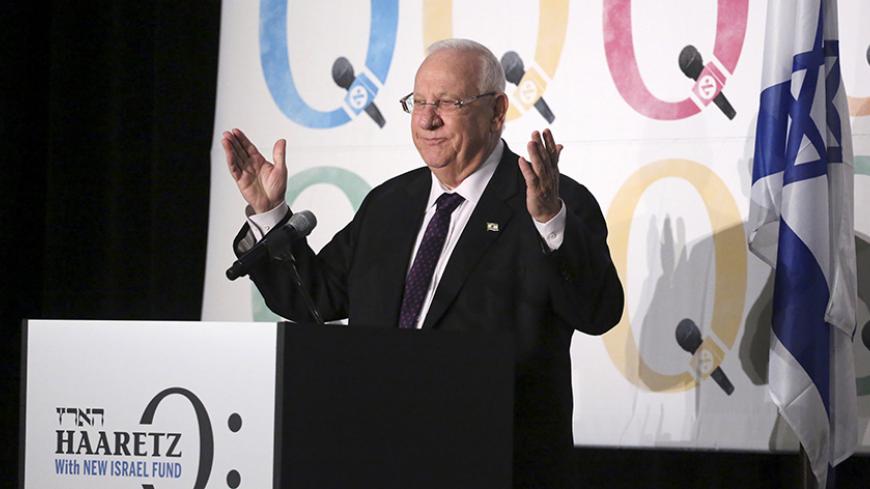 President Reuven Rivlin stands next to the Israeli flag as he addresses attendees at the "Haaretz Q: with New Israel Fund" event at The Roosevelt Hotel, New York City, Dec. 13, 2015. - REUTERS/Andrew Kelly

Yesh Atid Chairman Yair Lapid decided to begin his party’s weekly faction meeting Dec. 14 with a focused attack on Israel's Haaretz newspaper. The paper had responded to a request by Saeb Erekat, a senior Palestinian official, to remove the Israeli flag from the stage when he addressed a conference it organized in New York City on “Peace, democracy and social justice.”

Lapid adopted a very strident tone, calling the paper’s acquiescence to the request “the ultimate loss of any sense of national pride whatsoever by the radical left. Imagine the commotion if an Israeli spokesperson had asked for the Palestinian flag to be removed.”

Lapid’s monologue, delivered as a statement to the press, joined a long series of condemnations in the best case, and real incitement in the worst case, against Israeli President Reuven Rivlin, who also addressed the conference.

Finding himself forced to apologize yet again for taking steps perceived as favoring the left, Rivlin explained that his opinions have not changed. He still aligns himself with the right.

“I pay no attention to comments by them and others when I participate in the Haaretz conference. I’m not attending a conference by Breaking the Silence. I came to a Haaretz conference. Haaretz is a newspaper that I have been reading for 70 years now, in order to better understand why my opinions are right … yet at the same time, I think it is one of the newspapers most important to the survival of Israeli democracy,” Rivlin said in response to the criticism.

Veteran Israeli journalists such as Ben Dror Yemini (Yedioth Ahronoth) and Dan Margalit (Yisrael Hayom) attacked Haaretz and Rivlin not only for the removal of the flag, but also for the presence of speakers from the leftist organization Breaking the Silence.

“The moment Haaretz removed the flag says a lot about Haaretz, but also about Saeb Erekat.… When it comes to the issue of Israel, it [the newspaper] isn’t firm enough,” said Margalit, explaining his position in an argument on Army Radio with Haaretz’s publisher Amos Schocken.

Yemini aimed his criticism directly at the president. In an article published in Yedioth Ahronoth's print edition under the headline “Red Flag,” Yemini wrote, “Not only did the organizers of the conference and the participants forgo the respect that they deserved, the president also chose to forgo his own self-respect, and the respect that we deserved too, by choosing to appear at the conference.” According to Yemini, removing the flag was “a milestone." He wrote, "It crossed a red line. It signified the surrender of Haaretz, willingly perhaps, to those who reject the very existence of a Jewish state.”

Was what they did really that bad? It looks like Yemini, Margalit and Lapid got carried away.

The bottom line is that it is not at all clear why senior politicians and publicists came out against Haaretz. Logically, it makes absolute sense why Erekat, who serves as the secretary of the PLO’s Steering Committee, would be unwilling to deliver a speech with the flag of Israel, a nation he considers an occupying state, right behind him. His demand was entirely legitimate. He didn’t ask for the Palestinian flag to be placed behind him. What he wanted was reasonable.

Haaretz, which organized the conference together with the New Israel Fund, acted logically when it acquiesced to its guest’s request, particularly considering the newspaper is privately owned. In other words, the conference wasn’t organized by an official institution.

Furthermore, as it turned out, the flag wasn’t supposed to be on the stage in the first place. Schocken made this very clear to Army Radio. As he put it, “Erekat asked to speak without the Israeli flag in the background, and the president asked to have the flag behind him. We granted both requests." He noted that had it been up to the organizers, the Israeli flag would not have been part of the set.

What was inappropriate here wasn’t Erekat’s request or Haaretz’s response. It certainly wasn’t Rivlin’s decision to address the conference. It was the “patriotism police,” who have been turning every legitimate and reasonable event into a case of treason against the homeland, of falling off track and of ending the Zionist vision. This is the current mood, drawn from broad public sentiment and trickling down to the politicians and the mainstream media.

In fact, politicians on the right have made a whole career out of this. Culture Minister Miri Regev traveled the country during the primary season with an Israeli flag in her car, pulling it out at every election event. But while that is to be expected from the right, the same public sentiment has affected the chairman of centrist Yesh Atid, too. Lapid is waging a campaign of his own against the mainstream left, distancing himself from it as if it were infected. The reason for this is electoral. As someone who is already campaigning for prime minister, Lapid needs to win seats from the right and break up the existing party blocs. As such, his campaign includes ever-increasing religious content and plenty of patriotic statements.

Dailies such as Yedioth Ahronoth and certainly Yisrael Hayom are also connecting with this public sentiment, and particularly now, in the shadow of the current wave of terrorism. They want to put their patriotism on display.

The problem is that by doing so, the right, or in the case of Lapid, the center-right, are effectively excluding the Zionist left. Meretz, for example, has many members who serve in the Israel Defense Forces, some in the most elite units. While Haaretz may have a political agenda that's entrenched deeply in the left, it is still a Zionist newspaper. The event’s organizers respected the sentiments of their guest, who has never been suspected of loving Israel. Nevertheless, this accommodation does not make the newspaper the propaganda mouthpiece of the Palestinians or an enemy of Israel. It does not earn the newspaper a failing grade on its Zionism scorecard.

Anyone who thinks as much is preferring, for his or her own personal (and populist) reasons, to focus on a minor incident, rather than on the essence of the issue, which is where the Palestinian-Israeli conflict is really leading us.