Why some Syrian refugees see marriage as the only option

An increasing number of female Syrian refugees in Egypt are being pushed into marriage to survive harsh conditions. 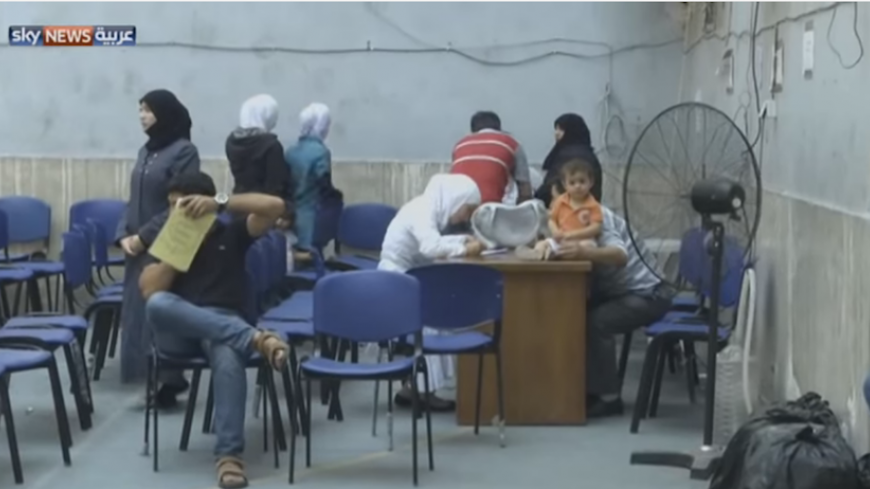 CAIRO — It has been almost five years since the Syrian revolution broke out on March 18, 2011. As the conflict between the various factions of the Syrian opposition and the regime of President Bashar al-Assad persists, over 4 million Syrians have fled to regional countries, including Egypt, in hopes of finding a decent future, free of the life-threatening risks that they encounter in Syria.

However, these hopes are currently endangered in Egypt. According to the UN High Commissioner for Refugees (UNHCR), the country is home to about 160,000 Syrian refugees, and there are offices set up to traffic in Syrian female refugees and arrange for customary marriages between Syrian women and Egyptian men in exchange for a fee. Customary marriage — known as nikah 'urfi — is a type of marriage where the contract is not registered with the state and no witnesses are required.

Al-Monitor met with Youssra al-Dali, 24, a Syrian woman who had no option but to marry a man over the age of 50 just to ensure that she had food and shelter.

Dali explained to Al-Monitor the reasons that prompted her to opt for this marriage. “I came to Egypt with my mother two years ago to escape the life-threatening situation in Syria. Bashar al-Assad's army killed my father, and we had no money to survive. All we had was 7,000 Egyptian pounds [$894] as we lost our belongings and homes in Syria and needed someone to feed us.”

Asked how she met the man, Dali said, “One of our Syrian neighbors [in Egypt] introduced him to me and suggested that I marry him. She hails from my hometown, and she wanted to lend me a hand because she was concerned about the dangers threatening us in Egypt. It was only later that I discovered that she had received a commission of 1,000 Egyptian pounds [$128] from my husband.”

“The man wanted a customary marriage. He would give us 1,500 Egyptian pounds [$192] per month over the course of six months in order for [me and my mother] to buy our basic needs, but he subsequently abandoned me. I have no news concerning him now,” she added.

For her part, Syrian Fadila al-Sayed, 56, told Al-Monitor, “Some Egyptians are taking advantage of our weakness and hopelessness. They are marrying our girls for sheer pleasure. I, my husband, my three daughters and son need money to survive, but we cannot seem to find decent jobs in Egypt. My husband works for a low salary in a shop, so I found myself compelled to marry off my 17-year-old and 19-year-old girls.”

“I do not feel ashamed of what I did. There are people taking advantage of our needs, and it is they who should feel ashamed!” she lamented.

“We came to Egypt because it opened its doors to Syrians and because prices in Egypt are much cheaper than in other Arab countries, but what we did not know was how limited job opportunities were. We did not know that many Egyptians were going to take advantage of our situation, weakness and dire needs,” she added.

A 45-year-old Egyptian man who married a Syrian told Al-Monitor on condition of anonymity, “I married a Syrian woman for three months, then I abandoned her but kept helping her. I did not breach the law. It is a matter of offer and demand. I wanted marriage, and she wanted to eat and drink, and whoever can provide such needs is entitled to get married.”

He added, “I met her through a [marriage] brokerage office in the al-Husari neighborhood of 6th of October City. They offered me three Syrian women, so I picked one and married her. I later abandoned her because I am married to an Egyptian and I have kids.”

Al-Monitor attempted to interview a woman in charge of a brokerage office located in 6th of October City, in the outskirts of Cairo, yet the woman refused to provide any information. “We only mediate between Egyptian men and Syrian women without receiving any commissions,” she said, without revealing her name.

Ghida Shafiq Qalaaji, secretary-general of the the Syrian General Commission for Refugees and Development, an organization in Egypt that works on providing assistance to Syrian refugees, told Al-Monitor, “Before we talk about young Syrian females getting married, we should tackle the cause of the problem, which is girls needing food, drink, clothing and protection in a country where they are strangers.”

She added, “If we succeed in providing Syrian refugees with these basic needs, then this dangerous phenomenon would wane.”

“We should deal with the source of the crisis to be able to get rid of it,” she added.

Marwa Hashem, a spokeswoman for UNHCR in Cairo, told Al-Monitor, “The UNHCR cannot help [refugees] for long periods of time. It has been about five years since the Syrian revolution broke out, and this issue has become very disturbing in light of the challenges facing relief organizations across the world and the huge increase in the number of refugees.”

“We found many cases where refugees were engaged in wrong behavioral patterns that included early marriage for Syrian girls in Egypt, as well as employment of children in inhumane street jobs that are incompatible with their age,” she added.

Hashem concluded, “We provide support to 31,000 Syrian refugees in Egypt, and this is the most we can offer at the time. We are paying a monthly amount ranging from 400 to 2,200 [Egyptian pounds] to each family, depending on the number of family members and the extent of their needs.”

In a report issued on Dec. 5, 2014, the United Nations Children's Fund linked halts in the provision of food aid with an increase in Syrian women marrying early to provide for their basic needs.