A look at the Middle East issues Congress will be addressing the week of Dec. 7. 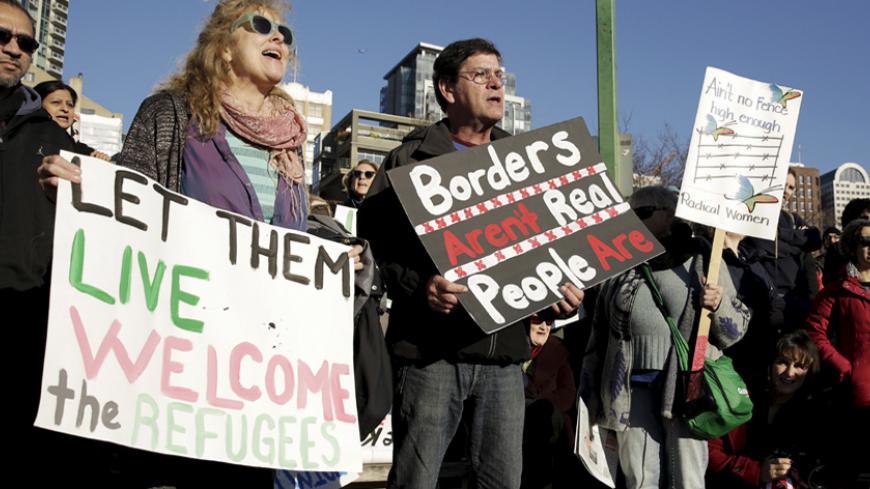 People participate in a pro-refugee protest organized by Americans for Refugees and Immigrants in Seattle, Washington, Nov. 28, 2015. - REUTERS/Jason Redmond

Congress is turning its attention to the terror threat from Europe following last month's deadly Islamic State (IS) attack in Paris.

After efforts to freeze refugee admissions from Syria and Iraq caused a backlash from the Obama administration and the foreign policy establishment, lawmakers in the House and Senate are now revisiting the visa waiver program with 38 mostly European countries. The House is slated to vote Dec. 8 on legislation from Rep. Candice Miller, R-Mich., chairwoman of the Homeland Security border security panel, that would suspend uncooperative countries and exclude people who have traveled to Iraq or Syria over the past five years.

"As Americans, we live in a free and open society, and terrorists are looking for any and every opportunity to exploit those freedoms and use them against us, so we need to think clearly," Miller said in this week's Republican address. "And clearly, we have a major weakness in our visa-waiver program — a glaring hole that we have to close."

Meanwhile, the Senate Judiciary Committee is slated to vote Dec. 10 on legislation from presidential candidate Sen. Ted Cruz, R-Texas, to strip US terrorism supporters of their citizenship. Similar legislation died five years ago when it was first introduced by then-Sens. Joe Lieberman, I-Conn., and Scott Brown, R-Mass., amid concerns that it violated the constitution and did little to protect the country.

The strategy to combat IS gets its day in the Senate Armed Services as Defense Secretary Ash Carter and Gen. Paul Selva, the vice chairman of the Joint Chiefs of Staff, brief Arizona Republican John McCain's panel on US policy toward Iraq and Syria on Dec. 9. The hearing comes one week after Carter made international headlines when he told the House panel that he was sending a special operations strike force to conduct raids against IS targets in those two countries and threatened to arm Sunni tribes directly if Baghdad doesn't do more to integrate them into its armed forces.

The House Foreign Affairs panel, meanwhile, is slated to vote Dec. 9 on legislation to directly arm the Iraqi Kurds battling IS. The bill, from Chairman Ed Royce, R-Calif., goes further than the annual defense bill signed into law by President Barack Obama last month by making it US policy to "directly provide the Kurdistan Regional Government with advanced conventional weapons, training and defense services on an emergency and temporary basis."

The panel is also expected to pass a nonbinding resolution from Rep. Ted Yoho, R-Fla., calling on the United States and the international community to prosecute parties that have used chemical weapons in Syria. Later that afternoon, the committee's human rights panel will look into why international humanitarian aid pledges for victims of IS have been lagging.

In the Senate, the Foreign Relations panel on Dec. 9 will examine peacekeeping reforms with Samantha Power, the US envoy to the United Nations.

Finally, the House is expected to vote as early as Dec. 8 on Senate-passed Hezbollah sanctions legislation. The bill has been bouncing around Congress for more than a year and a half.