Prime Minister Benjamin Netanyahu has managed to appoint loyal officials to Israel's most sensitive legal positions, leaving him free to endanger Israel with his policies. 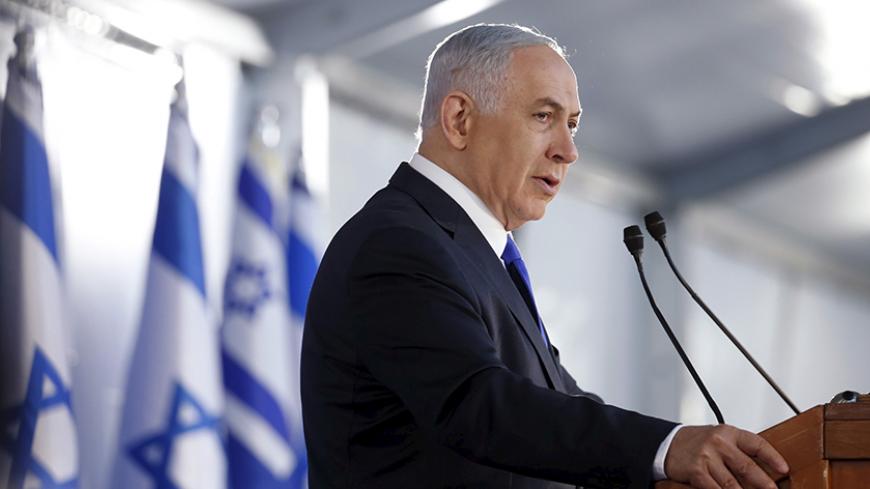 Judging by Nir Hefetz, the former journalist who serves as the Netanyahu family spokesman, the State of Israel is in big trouble. On Dec. 25, Hefetz appeared on Channel 2's prime time evening news. He was invited to the show to respond to allegations that the attorney general had been pressured to shelve numerous investigation files concerning the Netanyahu family (such as the Bibitours affair, travel expenditures, the Bottlegate affair, an electrician's visit to the premier's residence on Yom Kippur and garden furniture misappropriated for the premier's private home).

Hefetz said, “If Netanyahu is shunted aside, the State of Israel will probably have to give up many strategic assets.” The way the prime minister has been handling himself indicates that Hefetz was expressing the views of his boss and of the Netanyahu household. In the premier's official residence on Jerusalem's Balfour Street and at the family villa in Caesarea, Netanyahu is considered one of a kind, indispensable. Not just a man; an asset. Up to now, the term “strategic asset” was reserved for what foreign sources call Israel’s “nuclear deterrence” at that secret installation in the town of Dimona. Any attempt to raise the curtain covering the reactor is deemed gravely harmful to a strategic asset. Ask Mordechai Vanunu.

Netanyahu’s inner circle wants to hammer home the message that the people of Israel should be thanking God for deigning to crown this special man as their ruler. Such an asset must be protected at all costs. He must be insulated against anything that might distract him from his sacred toil in the service of his people. How many prime ministers in democratic states are willing to take on not only their own job but also to assume responsibility for the Foreign Ministry as well as the ministries of Communications, Economy and Regional Development? How many world leaders manage to dedicate their energies, talents and time to political wheeling and dealing to maintain control of their party’s institutions?

Ironically, Netanyahu is to blame for the government losing its mandate to appoint an attorney general of its choice, someone like current Attorney General Yehuda Weinstein, whose term expires at the end of January 2016. To move his Cabinet secretary, Avichai Mandelblit, to the attorney general's office in the Justice Ministry, a special committee of jurists had to be convinced beyond doubt that Mandelblit was the most suitable candidate for the job. The panel was established in 1997 following revelations about the ugly scheme cooked up by Netanyahu and Shas leader Aryeh Deri, known as the “Bar-On-Hebron” affair. The two put together a deal: Shas, in the Knesset, would support an agreement handing security control over certain parts of Hebron to the Palestinians in return for the appointment of Jerusalem Likud politico Roni Bar-On as attorney general. As part of the deal, Bar-On was supposed to strike a plea bargain in Deri's criminal investigation. Eventually, the appointment of Bar-On was foiled. Deri was convicted of bribery and sentenced to two years in prison.

Then-State Prosecutor Edna Arbel determined that the deal was a criminal plot to take over the attorney general’s office in order to serve the interests of criminal elements. But Elyakim Rubinstein, who was appointed to the job instead of Bar-On, decided there was insufficient evidence to try Netanyahu. Rubinstein (who had also held the job of Cabinet secretary prior to being appointed attorney general) also rejected Arbel’s recommendation to indict Netanyahu in an affair concerning the Amadi moving company. Avner Amadi, the owner of the company, claimed that during a period of three years (when Netanyahu was first prime minister) he completed several private moving services for the Netanyahus, but was never paid for them. He sent a bill for 440,000 shekels ($110,000) to the prime minister's office and demanded to be paid. In September 2000, Arbel recommended to indict Benjamin and Sara Netanyahu for fraud and to indict Netanyahu alone for breach of confidence.

The conduct of Attorneys General Aharon Barak and Yitzhak Zamir, both independent jurists and law professors, are instructive in explaining why Netanyahu went to so much trouble to appoint someone who would be in his debt. Barak took a strict line at the time on the foreign bank account of the Rabin family affair. This approach brought about Prime Minister Yitzhak Rabin’s 1977 resignation. Zamir’s refusal to cooperate with Prime Minister Yitzhak Shamir in covering up the execution of the bus hijackers in 1984 brought about the resignation of Shin Bet Director Avraham Shalom. At the end of the day, Zamir had to pay for his much publicized confrontation with the prime minister and was removed from his position as attorney general.

In both cases, the influence of the attorneys general went beyond the realm of the criminal to the personal. Barak ruled that in dealing with suspected violations of the criminal code, a prime minister and a construction worker are one and the same. He would not have entertained the notion that if Rabin were shunted aside, Israel would have to give up many strategic assets. Zamir cleaned up the Shin Bet and brought about passage of the Shin Bet Act. On the Shin Bet's website, a passage reads that the organization set out to learn the lessons of the Rabin affair “thoroughly and in-depth, both in terms of values and of professional standards, resulting in the formulation of new codes of conduct and work procedures. Eventually, this led to the formulation of the Shin Bet agency’s values and the passage of the Shin Bet Act.”

The prime minister's candidate easily got past the selection panel, another significant step in a series of appointments of confidantes to key posts. Netanyahu is definitely an important asset to members of his party — but a dangerous liability to his society. He is ruining the prospects of an arrangement with the neighbors, isolating Israel and nurturing hatred and fear. And he is doing all this while practicing democracy in name only, displaying rare maneuvering skills with a narrow coalition of 61 Knesset members. Were he to display an iota of the same talent to promote the state’s strategic interests, Netanyahu would be a worthy candidate for the Nobel Peace Prize.