What's the difference between habbeh and intifada?

Palestinian media and politicians have yet to agree on the terminology of the ongoing events in the West Bank and Jerusalem. 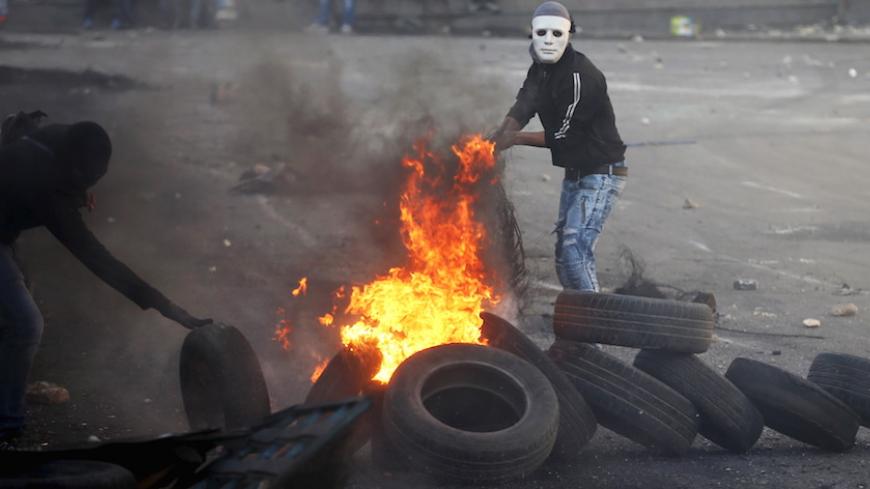 Palestinians clash with Israeli border police during clashes at a checkpoint between Shuafat refugee camp and Jerusalem, Oct. 9, 2015. - REUTERS/Ammar Awad

Palestinians and Arabs are still unsure about what to call the protest activities that began on the eve of the Jewish New Year on Sept. 13, 2015. Since then, 89 Palestinians and 12 Israeli soldiers and Jewish settlers have been killed and many more injured.

After the 1987 first intifada and the 2000 second intifada, it has taken pundits and politicians some time to decide whether what we are witnessing today is a full-blown uprising, or intifada in Palestinian terminology, or simply short, popular outbursts of protests, what Palestinians call "habbeh jamaherieh" in Arabic.

The differences have followed the split within the Palestinian movement with pro-Palestinian President Mahmoud Abbas media and politicians calling it habbeh, while pro-Hamas leaders and media are calling it an Al-Quds intifada or Al-Aqsa intifada.

Mohammad Omar, a leading Jordanian media expert and the editor of the Pan-Arab website Al-Bawaba, told Al-Monitor that it is hard to differentiate between the two terms. “What is accepted throughout the Arab world is that the habbeh, or outburst, is usually a reaction, is short winded and doesn’t usually include unified effort,” he explained.

Omar, now in his 50s, is based in Amman and was active in the Palestinian movements in his early years. He told Al-Monitor there is consensus in the Arab media that what we are witnessing is closer to a habbeh than an intifada.

Ahmed Yousef, political adviser to former Prime Minister Ismail Haniyeh, agrees with Omar. “Habbeh is a spontaneous act, which does not usually have clear goals; while the intifada is organized with a clear goal and a leadership that sets its agenda and its path,” the moderate Islamist leader who has often taken positions that differ from the mainstream Hamas movement told Al-Monitor.

Yousef insists on the need for a unified leadership to be forged before one can call the current protests an intifada.

Yousef’s opinion, however, is not uniformly followed by most of the pro-Hamas media in the Gaza Strip. Senior Hamas leader Mahmoud al-Zahar was quoted in the Gaza-based Donia al-Watan website as denouncing attempts to denigrate the current protest. “Habbeh is a term that was coined by those who don’t believe in the intifada and want to use the term to show that it is a mere transient movement and will end. What is happening is a real intifada.”

The differences in what to name the events was most evident in how opposing Palestinian television editors explain the reasons for the terminology they use to the local Palestinian media.

Majed Said, the official spokesman for Palestine TV, insists that an intifada requires continuity. “What we are seeing in the West Bank and Gaza doesn’t qualify in this manner, and that is why we call it habbeh.”

On the other hand, Imad Zaqout, news editor of the Hamas-run Al-Aqsa TV in Gaza, had a different take. “Al-Aqsa TV doesn’t call it a habbeh, we call it Al-Quds intifada, which began as an outburst, but has now become a continuous intifada.”

The difference in terminology has led to a series of articles in local, regional and international media. The London-based Al-Quds Al-Arabi and the Doha-based Al Jazeera ran a story on the subject, as did the newly established HuffPost Arabi.

There is no doubt that there is a high degree of politics and wishful thinking in this issue of terminology. The Ramallah-based Palestinian government — whose hands are tied with the issue of security coordination with Israel — can’t publicly be seen as supportive of an open-ended intifada; otherwise, the fate of Abbas, its current leader, will most likely be the same as the previous one. Yasser Arafat spent his last days late in October 2004 being surrounded by Israeli tanks at the end of the second intifada. Israeli troops attempted to pressure Arafat to return to security coordination after Palestinian police joined the public in attacks against Israelis.

Palestinian terminology is also restricted by the continued division between the PLO and the Islamic Hamas movement. The unity of Palestinians was the clearest trademark of the first intifada. The Unified Leadership of the Intifada was clandestinely created and was able to steer the protests using secretly produced leaflets and guidance statements.

The Palestinian leadership, however, is trying to stick to the definition that this is not a third intifada in order to use that as leverage to force the Israelis into coming to terms with the need to end the decades-old occupation. But while the Palestinian leadership is using the protests as a means to scare the Israelis into a possible eruption of a third intifada, many of the youths active in the protests are instead calling for a change of leadership, which they feel has failed the Palestinian people in so many ways.