The International Committee of the Red Cross has a plan to identify the remains of those who went missing during Lebanon’s civil war, but support from the government is agonizingly slow. 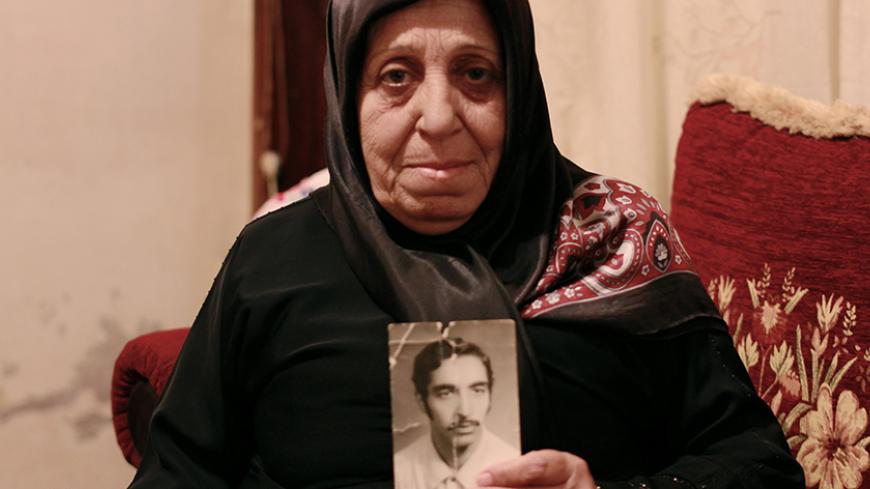 Fatima Rida holds a photo of her missing husband, Hussein Moalim, in this image taken in Beirut on Nov. 3, 2015. Moalim disappeared in March 1976 during Lebanon's civil war. - Ash Gallagher

BEIRUT — In the Shiite neighborhood of Zqaq el-Blat in Beirut lives Fatima Fneish, who has agonized over the disappearance of her brother Hussein Fneish, 16, who went missing in 1976 during Lebanon’s civil war on his way to school.

Fneish, 60, invited Al-Monitor to her home to share her family’s story. As she sipped her coffee and smoked nervously, she said, “Hussein was with [our] mother and father. He was walking when the Phalange, who were in the area. … They called out to him because he was tall for his age, and arrested him. My mom, afraid my brother would get shot, said they could take him and the [family] would find him again [later].” But the Fneish family would never see him again.

The Phalange militia, a party largely supported by Maronite Christians in Lebanon, had set up a checkpoint near what is now the Khodor el-Karantina neighborhood. Fneish is one of thousands who went missing during the 15-year Lebanese civil war, which began in April 1975 and lasted until 1990. With many different groups fighting a cultural and religious war, it has been estimated that at least 17,000 people went missing — kidnapped or killed — during continuous rounds of violence. For the families of those who went missing, closure has been long overdue.

But now, the International Committee of the Red Cross is preparing to introduce a DNA testing program to the forensic investigation into Lebanon’s missing.

After adding biological samples from family members to their prior testimonies of the events during that period, the ICRC will partner with Lebanon’s Internal Security Forces to match this information with skeletal remains found in mass graves all over the country.

The ICRC expects to begin collecting DNA samples in the coming weeks. They will take cheek swabs from family members and store them in a lab the ISF will provide. Pierre Guyomarc’h, ICRC’s forensics adviser, told Al-Monitor, “The emergency is to collect this data before people die. Every couple weeks we hear of a former interviewee who has passed away” due to old age.

The organization has already interviewed at least 2,000 families and it expects there will be more. While most families have not given up hope, many have spent time and money chasing shadows and being taken advantage of for years. “We proactively sought to find my brother. We even sought out some political leaders,” said Fneish. “For years, we would hear rumors and we would go to try and find him. People would claim they had information, but would also claim they needed money and really they just wanted to rob us.”

Fneish emotionally described her brother as a meek red-haired boy who was kind to children, well mannered and wanted to go into the fashion industry after high school. “He would match his shirt and pants and was very hygienic, he had all the good qualities. I was very affected and took Valium because I was having mental breakdowns. It affected my mother, who always cried. My mom still expects him to come back.”

The family sold their businesses and their assets after her brother’s disappearance, investing everything they had into finding Hussein. “To have someone who is missing is the hardest thing in life because you don’t know where he is and have no grave to visit,” Fneish said.

Guyomarc’h said the biggest challenge to moving forward with the project is getting final legal permissions from Lebanon’s parliament. “The paradox is when you try to have a document signed and go through, it takes a lot of time, because it’s sensitive, it’s political. People always say perpetrators from the war are still in power and you still have issues between sects,” he said.

Al-Monitor reached out to the Interior Ministry, which is now in charge of pushing through the legislation to make the project happen, but did not receive a response.

Fatima Rida was the wife of Hossein Moalim, a cook who disappeared on his way to the Bekaa Valley on March 11, 1976.

Rida, 64, told Al-Monitor that her husband went to pick up chicken for the restaurant where he worked. But he never came home and three days later, the truck he was driving was found empty. “Some say he was murdered, some say he was arrested. I lost my nerves. Two years after the disappearance of my husband, my father, who used to help me, passed away,” she said.

She then went to work at an airline, leaving her five small children at home alone. “When I left, I would leave them in the house and give the keys to the neighbor. I gave them money and when they were hungry, they could call the neighbor. Yes, I left them alone, but I was afraid they would go out and get run over by a car.”

The responsibilities of caring for her family alone gave Rida a lot of anxiety over the years, and she continues to take medication to calm herself down. But she has also focused her attention on her grandchildren, and that keeps her going.

Rida isn’t certain about the ICRC program. She hopes it could help identify a body if it’s really out there, but she’s resigned to her life without her husband. “I don’t think he’s alive. He would have come home. How can he come back?”

The ICRC project is still waiting for ministerial approval to store samples with the ISF, whose crime lab will later create a database to identify the missing.

The ICRC remains staunchly neutral toward Lebanese politics. However, Guyomarc’h noted that the general response from the Foreign Ministry and Interior Ministry has been positive, but when it comes to signing an actual law that will officially commission the DNA investigation, the process has been slow. “They are too afraid to reopen a wound and to give new reasons for a conflict. This fear of going back to war is more important … than anything.”

But with the Lebanese government in conflict over the current trash crisis, it seems little else is able to get through to the council of ministers, many of whom do not attend legislative sessions due to a lack of agreement on agendas. And at such a slow rate, the longing for closure of the missing's families will be passed on to another generation.