Why Iraqi women are turning to the Internet to buy books

Iraqi women are ordering books from the comfort of their own homes, overcoming the crippling security conditions. 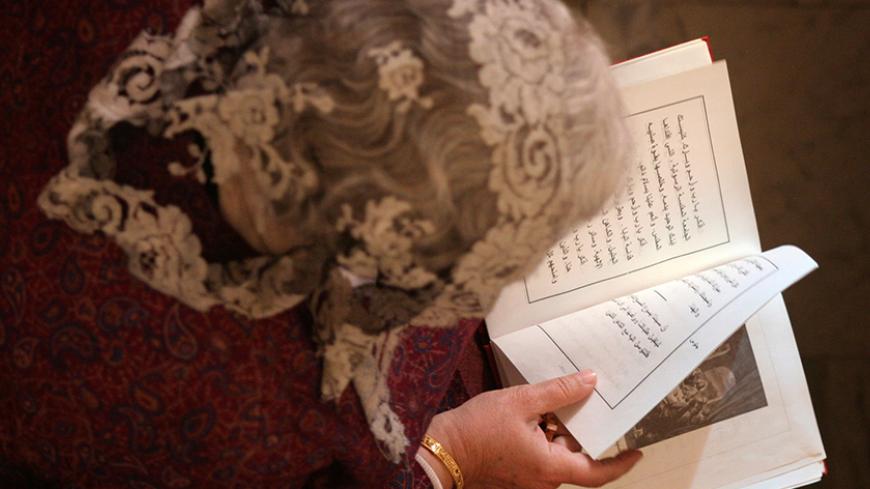 BAGHDAD — The deteriorating security situation in the Iraqi capital has prevented Noor Jamal Abdul Hamid from going to Mutanabbi Street to shop for books and stationery. Abdul Hamid is a young woman who found herself crippled by risky roads and social restrictions that prevent her from leaving her house. Despite all this, she manages to read plenty of books and hosts discussions of what she reads over Twitter.

Abdul Hamid, who was born in Baghdad in 1991, is a graduate of Alrafidain College. She is currently unemployed and reads to pass the time. In order to understand what is going on in her society and the mysterious Iraqi political life, she opted for “finding the truth in books,” as she told Al-Monitor, and so created her own library.

But how did she manage to collect 300 books, including novels, poetry and philosophy, when she had no access to a bookstore? “I found a bookstore on Facebook that delivers books to my doorstep,” she said.

This trend has emerged as a result of the security situation, giving housebound women access to books, and has also created a successful venue of commerce.

Abdul Hamid taught her friend Saja Imad how to order books over the phone or through Facebook, and Saja began to collect a set of books of her own.

She added, “I discovered that books are the best companion in life. When we read, we advance and learn things that we do not usually think of.”

Imad was born in Baghdad in 1990, and she graduated from Al-Mustansiriya University. She said after the long distance, household chores and street insecurity prevented her from reaching Mutanabbi Street to buy books, she was happy to learn about the book delivery service.

Neither Abdul Hamid nor Imad could have managed to have their own personal libraries had it not been for the new service offered by Dar al-Hikma Bookstore on Mutanabbi Street. This bookstore delivers books bought online in exchange for affordable delivery fees amounting to about $4 for each order.

Al-Monitor met Abdel Halim al-Samarrai, the owner of Dar al-Hikma Bookstore. He is known among Iraqi intellectuals and writers for his activism and persistence when it comes to getting books published in Lebanon, Egypt and the Arab Maghreb countries. When books reach Baghdad, Samarrai posts them on the “Zajel Kotob” ("Book Carrier") Facebook page, where they can be ordered for delivery.

Samarrai told Al-Monitor that he receives five to 10 orders a day from Baghdad and other Iraqi provinces, and that he is happy about the growing demand for books. He explained, “Delivery orders are less expensive for both women and men because they spare people the hassle of traffic jams in the capital, plus it is a fast service that facilitates the delivery of books to remote Iraqi provinces deprived of any bookstores.”

Samarrai’s delivery service now competes with 15 booksellers, and he said it surprised him to learn that 80% of his customers were women, most of whom prefer to read newly translated Arab and international novels from publishing houses in Arab countries.

The high demand for books has prompted Samarrai to employ young people to manage the Zajel Kotob page. They receive requests, interact with readers and answer their questions. Samarrai also expanded the network of taxi drivers who deliver books to houses for a $4 fee.

This service has had a remarkable impact on young female readers, expanding their horizons without them having to leave home. Imad, for instance, is currently dreaming of writing. “I dream of becoming a writer, and I do write, albeit occasionally and briefly,” she said.

Unlike Imad, who keeps her writings for herself and has not published them, Abdul Hamid entered the world of journalism and has had several short publications in local newspapers. She also intends to interview via e-mail novelists she admires.

Samarrai admitted that not many people read in Iraq, “but the demand for books is likely to increase in the coming years.” He said all bookstores should provide this delivery service and pointed out that he was personally keen on limiting his profit from the sale of books.

Still, many people complain about the high prices of books. However, Abdul Hamid put it romantically: “The truth that can be found in books is more valuable than their price.”

“Books are priceless!” echoed her friend.

Despite the devastation and rampant violence plaguing Iraq, there is some good news: Women who find it difficult to leave their houses because of the deteriorating security situation and growing patriarchal restrictions are now pursuing their education from home, defying the conditions that they live in.