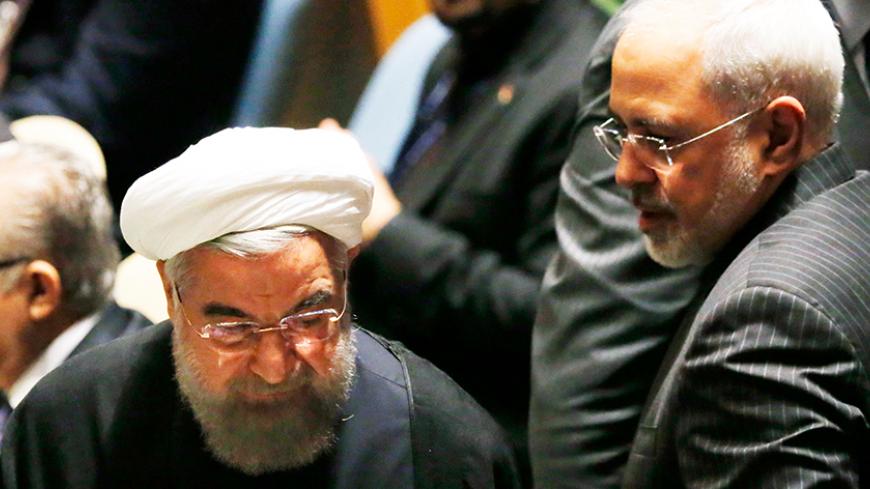 TEHRAN, Iran — On Sept. 28, an unprecedented event in the history of relations between post-revolutionary Iran and the United States took place: Foreign Minister Mohammad Javad Zarif shook hands with President Barack Obama. Any such personal encounter or even the talk of an encounter is a highly sensitive issue in Tehran. Indeed, the Obama-Zarif handshake has led to severe criticism in Iran, with some hard-liners going as far as outright insulting their country’s foreign minister.

Even as hard-liners demand that Zarif apologize to the nation for crossing what they refer to as red lines, with some even calling for the foreign minister’s impeachment for greeting Obama, several members of the Iranian delegation who visited New York for the UN General Assembly insist that the handshake wasn’t a pre-planned event.

In separate interviews with Al-Monitor, several Iranian officials have revealed so far unknown aspects of the much-discussed Iranian-American encounter. These revelations also offer potential insights into why the long-sought and long-discussed handshake between Obama and President Hassan Rouhani yet again failed to take place.

A member of the Iranian delegation who visited New York and asked not to be identified told Al-Monitor, “With respect to that, President Rouhani and President Obama were giving their speeches on the same day. President Rouhani had rearranged the timing of his meetings and plans to lower the possibility of an accidental encounter with Mr. Obama.”

The senior Iranian official added, “When Mr. Zarif was shaking hands with Mr. Obama, President Rouhani was out of the UN building, meeting with the Venezuelan president. President Rouhani knew such an encounter with Obama would have happened, so he applied small changes to his agenda.”

Of note, at the time of the Zarif-Obama handshake, Rouhani was already under pressure from hard-liners at home. Beyond criticism of the president’s wider agenda, they specifically slammed him for traveling to New York and opting not to return to Iran in order to personally address the hajj stampede, which led to the deaths of hundreds of Iranian pilgrims.

Detailing the Zarif-Obama encounter, the senior Iranian official who visited New York told Al-Monitor, “There is a small hall behind the section of the UN board of directors. … The hall has a small corridor, where two people can easily walk past each other and have eye contact; apparently Zarif and Obama saw each other there.” Explaining why the encounter was not immediately widely publicized as the UN headquarters was packed with officials, diplomats and media workers, the official explained, “This place [where the Zarif-Obama handshake took place] is exclusively set up for the world leaders … and no journalist is allowed to be there. That is why there is no picture of the moment of the handshake.” Explaining the moment when the two leaders met, the Iranian official said, “Both delegations stopped for a moment. Secretary Kerry introduced Mr. Zarif to Mr. Obama, and then the US president extended his hand. It was against Islamic-Iranian culture and ethics for Mr. Zarif not to reciprocate.”

An Iranian diplomat who separately spoke to Al-Monitor on condition of anonymity further revealed, “The encounter took place when President Obama was entering the UN building and Mr. Zarif was going out.” He also indirectly raised some questions about the historic encounter, saying, “Obama’s arrival at the UN was unexpected, because he had already delivered his speech at the General Assembly. So it is possible that the US delegation had planned their time of entrance to encounter the delegation of Iran’s president, which ultimately didn’t happen.”

Another Iranian diplomat who also spoke on condition of anonymity told Al-Monitor, “There was no coordination between Iran and the United States on the brief [Zarif-Obama] encounter. I can speak for the Iranian side at least. We had no such agenda, and we were completely unaware of any possibility of running into them [the American delegation].”

Regardless of who initiated the handshake and whether or not it was pre-planned, Iranian hard-liners have lashed out at Zarif. As part of the pushback, the Iranian foreign minister has been summoned to the conservative-dominated parliament to explain how the controversial handshake took place. Zarif has in the past been repeatedly summoned to parliament over aspects of his encounters with American officials as part of the nuclear negotiations with six world powers.

The day after the handshake, hard-line member of parliament Bahram Biravand criticized Zarif for what he called not pursuing the hajj stampede and the status of injured Iranian pilgrims. He expressed open anger with the foreign minister and bluntly exclaimed, “A cockerel has much more prejudice than Zarif.” This sentence has been met with criticism from moderate and Reformist figures as well as associated media outlets, who all consider the remark offensive.

Once under fire for going on a stroll with his American counterpart, it appears that Iran’s foreign minister will now have to deal with yet another series of grilling — this time for greeting the US president.