How to end the war in Yemen

All involved in the war in Yemen, which has created a horrific humanitarian disaster, have paid a high price. A political solution is needed immediately. 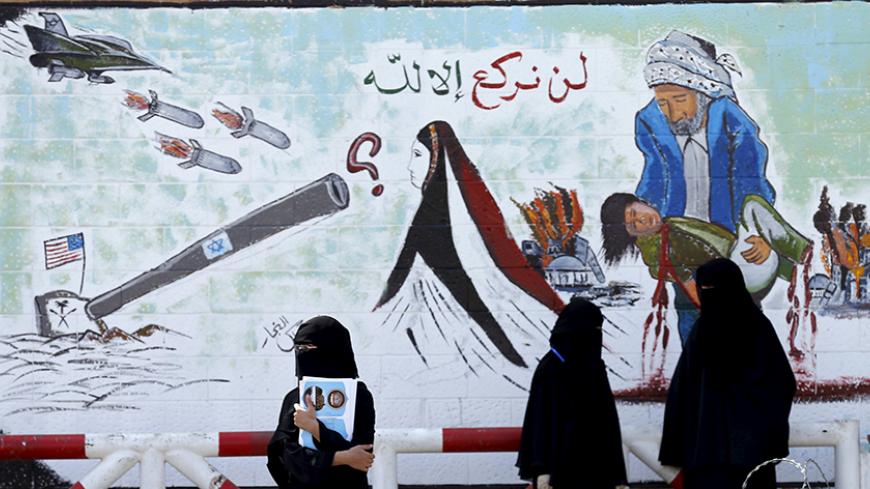 Women stand next to graffiti painted by pro-Houthi activists on the gate of the Saudi Embassy in Yemen's capital, Sanaa, Oct. 21, 2015. The writing reads, "We will kneel only to Allah." - REUTERS/Khaled Abdullah

The tragic war in Yemen needs a political solution urgently. UN Security Council Resolution 2216 provides a one-sided path forward. A better solution would outline a path forward for all the parties. All parties involved need to back off their extreme positions. Some creative imagination needs to be given to this crisis sooner rather than later.

The war expands and grinds on as the Saudi-led coalition brings in more troops from Sudan, Mauritania and elsewhere and prepares for an assault on Sanaa. Al-Qaeda and the Islamic State are growing more potent. Aden, the southern port recovered by the Saudi coalition, is a chaotic, broken city — not a symbol of restored law and order. There is little sign a real cease-fire is in the works. Talks planned to take place in Oman failed. Appeals for $1.6 billion in international aid have gone unfulfilled. Millions of Yemenis are suffering.

The current peace effort is based on a formula decided hastily by the Security Council to satisfy Riyadh. Only Russia demurred. A better approach would be to determine who needs to exit the Yemen equation, who needs to reconsider their posture, a new regional agreement for the Arabian Peninsula and a better role for Washington.

At the top of the list to go is the man who has done so much to ruin the Arab World's poorest state. Former Yemeni President Ali Abdullah Saleh needs to retire permanently and thoroughly from Yemeni politics and take his sons with him into exile. More than any other figure, Saleh is responsible for the tragedy of today's Yemen. After 33 years of misrule, he refused to accept the results of the Arab Spring and systematically undermined efforts to build an inclusive broad national government. Saleh needs to go. It can be a comfortable retirement, but his departure should be the commonly agreed upon basis of a deal.

Two other parties don't need to lose but do need to be sobered by the events of the last year. The Zaydi Shiite Houthi rebels have cost themselves and Yemen a humanitarian catastrophe by their arrogant pursuit of power. They need to be part of a national reconciliation process but not the sole or dominant power broker. The government of President Abed Rabbo Mansour Hadi was elected in a legitimate process, even if he proved a very weak leader, as many expected. He can step down gracefully and let a government of national unity come forward that includes the Houthis. The UN should mediate its formation.

The Zaydis also need to recognize Iran is an unreliable and ineffective ally who did little or nothing to help Yemen or them. Iran meddled in Yemen solely to frustrate Saudi Arabia, the United Arab Emirates and the other Gulf states. It has not been a responsible party in this crisis.

Saudi Arabia needs sobering, as well. Its hasty decision to begin airstrikes and a blockade (before even consulting some of its own allies such as Pakistan) plunged the region into war. The blockade has created a horrific humanitarian disaster for Yemenis. Both sides have caused terrible acts of violence, but the kingdom is a state that aspires to lead the Islamic world and must be held to a high standard.

Saudis in the border region have also paid a high price for the war, and all Saudis and their Gulf partners should have to foot the enormous bill for reconstruction in Yemen. The kingdom needs a more thoughtful and judicious foreign policy than the one that went to war this year.

Offering Yemen full membership in the Gulf Cooperation Council (GCC) would be an excellent start, and some prominent Saudis have already suggested the idea. A GCC with Yemen would contain 70 million people. It would unite the peninsula. Bringing Yemen into the rich Gulf club would emulate the European Union's positive approach of bringing in poorer European states to help them transition to a stable and prosperous future. It will mean the Saudis, Emiratis, Qataris and others take on the task of rebuilding Yemen at their (considerable) expense. The alternative is to leave a festering open wound in the peninsula that will bleed them as Yemenis seek revenge for this war for a generation to come.

Of course bringing in Yemen means dealing with many complex issues involving currency, internal migration, internal security arrangements and many others. Riyadh and Abu Dhabi should lead the way in developing urgent and equitable ways forward on these issues. Not all or even most need to be fully resolved before Yemen gains admission to the GCC's summits and top decision-making. It is long past time to treat Yemenis as equal partners in the peninsula. In the long term, a bigger GCC, perhaps also including Jordan, could be a transformational mechanism for income redistribution and political reform.

Finally, Washington needs some second thoughts. It facilitated a war it has no vital interest in and let several allies operate callously. It has done far too little to secure a cease-fire and lift the blockade. It should be much more engaged at a much higher level in resolving this war than it has been to date.