Instead of taking advantage of the current crisis to impose significant diplomatic moves on Israel and the Palestinians, France and the United States came up with useless ideas that are only expected to increase the extent of the despair. 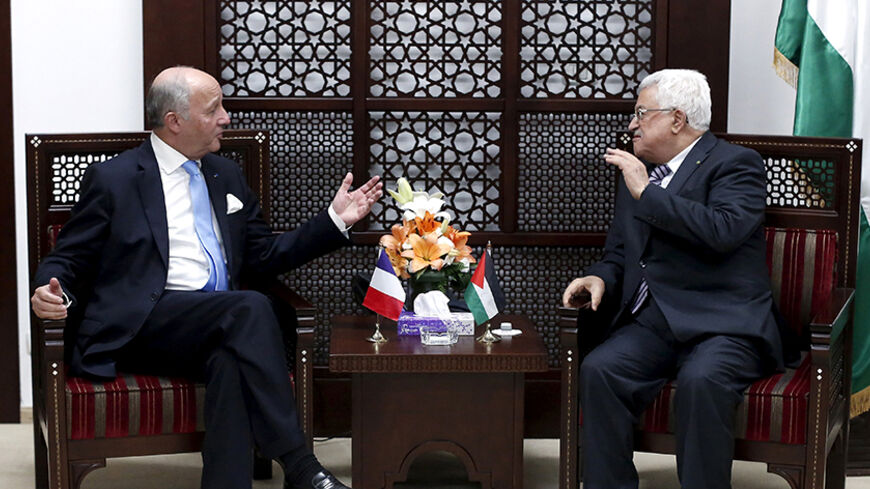 The French initiative to deploy an international observer force on the Temple Mount, as reported Oct. 17 in the French daily Le Figaro, brings to mind an old English joke about an initiative to change the driving directions in the United Kingdom and adapt them to those of most of the Western world. At a British government debate on the matter, one of the ministers said that such a revolution should be implemented gradually and not imposed on the public in one fell swoop. To start with, only trucks would drive on the right side of the road, then buses and taxis. If the experiment was successful, the change would be applied to all vehicles.

Until the last visit by French Foreign Minister Laurent Fabius to Jerusalem and Ramallah in June, France was leading a strategic move at the UN Security Council for recognition of a Palestinian state within the 1967 borders, with Jerusalem as its capital. But instead of leveraging the current crisis of the stabbing intifada to advance a permanent arrangement between Israelis and Palestinians, Paris is offering the sides another short-acting sedative.

The English joke is also apt for the current mediation attempt by US Secretary of State John Kerry. Instead of pulling out a plan to resolve the conflict, he turns the world’s strongest power into a fire brigade band. “The administration’s main aim right now is to return the dangerous genie to the bottle that [Prime Minister Benjamin] Netanyahu — in their eyes — failed to close in time,” wrote Haaretz US correspondent Chemi Shalev on Oct. 18. “Among people close to the administration there are those who are even toying with the idea of using the crisis as leverage to relaunch some kind of peace process," Shalev added. “For now such offers are mostly being greeted with amused sighs of despair.”

If there are any Israelis and Palestinians who still believe or hope that the international community will extricate them from the occupation and diplomatic freeze, they will not be amused by the failed French idea and the US attempt to manage the crisis. On the other hand, this illustration of US and French ineptitude is expected to increase the despair, which in turn could result in intensified violence. Just one year ago, on Oct. 12, 2014, Kerry suggested to a reporter at a news conference that the Arab Peace Initiative could serve “in one form or another” as the basis for negotiations. He was referring to the 2002 plan proposed by the Arab League for peace and normalization with Israel — in return for the two-state solution based on the 1967 borders.

On Nov. 13, 2014, Kerry was called upon to put out the latest fire that had broken out on the Temple Mount and spread throughout East Jerusalem and the West Bank. Emerging from an urgently convened meeting in Amman with Netanyahu and Jordan's King Abdullah II, Kerry pledged that the United States would adopt “specific and practical actions that both sides can take.” He declared that the United States "stands ready to be engaged" in the peace process. This time he did not mention the Arab Peace Initiative and passed the ball to the Israelis and Palestinians — to the cat and mouse. According to him, the United States will get involved in the process only on the condition that "the parties themselves begin to create the climate."

It would be interesting to know whether Kerry himself believes that a government, most of whose members do not even recognize the existence of the Palestinian people, is a potential partner for creating a suitable diplomatic climate to vacate the occupied territories and to make way for a Palestinian state. At the time of writing, Oct. 19, two Palestinian families were being evicted from their homes in the village of Silwan, adjacent to Jerusalem’s Old City, to make room for families of settlers. Perhaps the Palestinian children, finding themselves homeless in the chilly autumn night, will cover themselves with the statements of condemnations issued by the foreign ministries in Paris and Washington.

Every year that goes by without progress toward a two-state arrangement strengthens its opponents. Every tender issued for the construction of new housing units in the West Bank settlements and in the heart of the Arab neighborhoods of Jerusalem’s Holy Basin turns the conflict more religious and less prone to resolution.

The current crisis that has its roots in the prayer by Jews on the holy site is largely reminiscent of the one that broke out at the start of 1994 following the murder of 29 worshippers at the Tomb of the Patriarchs in Hebron by a Jewish settler. Then, too, the crisis was not utilized to bring about change. Then-Prime Minister Yitzhak Rabin rejected the recommendations of some of his top advisers to take advantage of the shock and horror felt by the Israeli public and to vacate the Jewish settlement in Hebron from which the murderer hailed. Rabin feared a “civil war,” and instead of evacuating the Jewish settlement, he imposed a lengthy curfew on the Palestinian neighborhoods to forestall revenge attacks. Six weeks later, Hamas started expanding its suicide attacks — no longer just against military targets and only in the occupied territories, but also to civilian targets within the Green Line.

Then, too, someone pulled out the magic wand — an international observer force. The force was made up of volunteers from Norway (which is charged with its operation), Italy, Denmark, Turkey, Sweden and Switzerland. According to their mandate, the observers are permitted to patrol in cars and on foot throughout Hebron and to record their impressions, but they do not bear arms and are not authorized to intervene. At the beginning of 2004, several days after ending his tour of duty as head of the mission, Jan Kristensen told the daily Haaretz that the Hebron settlers go out almost every night and attack their Palestinian neighbors, break windows and cause damage, “and in fact force the Palestinians to leave the area.” Kristensen said he was doubtful the two communities could lead normal lives. “I keep asking myself what we are doing in Hebron,” the Norwegian officer wondered aloud to the Haaretz correspondent.

Rabin, too, wondered about Hebron. The US Middle East envoy at the time, Dennis Ross, revealed in his book “The Missing Peace” that shortly before Rabin's assassination, in November 1995, Rabin confessed to him that he was wondering whether he had been wrong to keep the settlers in place. In fact, Ross’ boss, President Bill Clinton, should have asked himself why he did not pressure Rabin to do the right thing. The day is near when President Barack Obama will also join the club of self-doubters. For now, we are getting the answers to these questions at the cemeteries and hospitals.