A grandson of the late Saudi King Faisal and former senior military officer says the time has come for Saudi Arabians “to take care of ourselves” and “lead” the Middle East against regional threats. 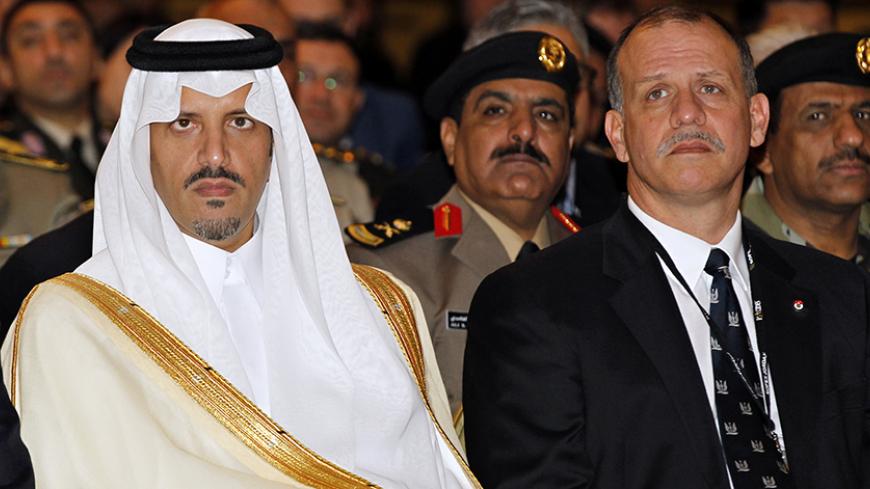 A former commander in the Saudi navy and expert in special operations said Oct. 6 that Saudi forces have captured Iranian military officers and Hezbollah members in Yemen despite Iran’s claims that it has not intervened militarily on the side of Houthi rebels.

Prince Sultan bin Khalid Al-Faisal, a grandson of the late Saudi King Faisal and a nephew of the kingdom’s recently deceased longtime foreign minister, Saud al-Faisal, told an audience on Capitol Hill that Saudi Arabia is prepared to lead the Middle East against a host of threats, including “increasing Iranian incursion into other states’ affairs” and the turmoil that has followed the so-called Arab Spring.

Sultan, 48, who recently retired from active duty after 20 years in the Saudi military, said he was not speaking on behalf of the Saudi government. But his comments echoed accusations by Saudi officials that Iran is actively intervening in conflicts in Yemen and other Arab countries.

According to Sultan, “Some of the prisoners [captured by Saudi-led forces in Yemen] are Hezbollah and Iranians.” Sultan said the Saudis also encountered members of Hezbollah during a previous conflict with Houthi rebels in 2009. He said that Hezbollah members were in Yemen then to upgrade launchers for Frog missiles that the Houthis were trying to adapt. “Hezbollah was very involved,” Sultan said. “They were there.”

The Iranian Mission to the United Nations had no immediate comment when asked about the validity of these allegations. In the past, however, Iran has denied military involvement in Yemen and said that its influence over the Houthis is minimal.

Saudi bombing of Yemen, which began in March after the Houthis seized control of the capital, Sanaa, and marched south has aroused widespread criticism because of the humanitarian crisis it has caused in one of the world’s poorest states.

However, Sultan, who had extensive training in the United States, including in the US Navy SEAL program, and led development of the Saudi navy's special forces, said the Saudi role in regional conflicts “is very much misunderstood by many in the international community and some of our Muslim brothers.” Situated “in a region of turmoil, revolutions and occupation … Saudi Arabia has to survive and maintain a stable and viable government,” Sultan said. “We do not seek to become an expansionist country … export revolutionary ideas [or] project power through far-off lands.”

On the other hand, Sultan said, “When the national interests of Saudi Arabia are threatened, then Saudi Arabia has no qualms whatsoever in using its armed forces.” He pointed to past interventions, including protecting Kuwait from Iraq in the 1960s and “numerous border conflicts … most of them with Yemen.”

“We have had a lot of experience in combat,” Sultan said. “We have learned from our failures and built on our successes. We have a young leadership and a lot of enthusiasm and drive.” He also pointed to the growing role of special forces in the kingdom’s military, which previously stressed conventional warfare.

Sultan expressed alarm about the rise of instability in the region, which he traced to the US overthrow of Iraqi President Saddam Hussein in 2003. “The level of violence has increased tenfold” since then, the prince said.

Sultan also voiced doubt about whether the recently concluded nuclear agreement with Iran would actually stop it from developing nuclear weapons. “They have 10 years to accumulate riches and they can start up again,” he said.

With the United States and other Western powers disengaging from Middle Eastern conflicts, “We are going to have to take care of ourselves,” Sultan said. Speaking fluent English, Sultan said with emphasis, “We are moving the armed forces to a level needed today to lead — lead — the Middle East.”

In recent years in part because of concerns about Iran, Saudi Arabia has gone on a weapons buying binge. The kingdom ordered about $65 billion worth last year — making it the world’s top arms importer — and is in the middle of the largest US arms deal in history — $60 million in new fighter jets and helicopters. The Saudis are also buying more US Patriot missile batteries.

Asked by Al-Monitor whether the collapse of oil prices this year and consequent increase in the Saudi budget deficit would dampen the buying spree, Sultan noted that Saudi Arabia had experienced a similar crisis in the 1980s and we “learned how to tighten our belts. … We’re pretty good at getting the most out of our weapons. If we need to slow down our procurement, we will.”

Al-Monitor also asked about allegations that the Saudis have rebuffed recent cease-fire proposals for Yemen and refused talks about Syria and other issues with the Iranians.

Sultan replied that the Saudis had accepted humanitarian cease-fires but that the Houthis “chose to disregard those terms.”

As for outreach by Iran, he said that the Saudis had been open to engagement except for “last week at the United Nations,” when Saudi Foreign Minister Adel al-Jubeir refused talks with Iran because of what Sultan said was “escalating rhetoric” in response to the deaths of Iranians and other pilgrims during a stampede at the hajj. The Iranians have accused the Saudis of incompetent management of the annual pilgrimage and the two sides have exchanged conspiracy theories about who caused the tragedy.

Relations between the two regional powers were already at rock bottom because of deep differences over the future of Syria, Iraq, Lebanon and Yemen. Regarding Syria, the Saudis demand that President Bashar al-Assad step down as part of any peace agreement.

Sultan told the Capitol Hill audience, “We are more than willing to sit down and talk to Iran. It’s a neighbor. We can’t be at each other’s throats forever.”

However, he told Al-Monitor after the briefing, “There have to be good intentions on both sides.”

Iranian Foreign Minister Mohammad Javad Zarif told a New York audience Oct. 5 that to resolve regional disputes requires a “different paradigm” similar to the nuclear deal in which “we were able to define the problem in a non-zero-sum way. … The same applies to Syria, Yemen, Iraq. … Unless we change the paradigm, we will not be able to resolve our problems.”

However, David Ottaway, a Middle East expert at the Wilson International Center for Scholars, told Al-Monitor, “I don’t think Saudi Arabia is in a talking mood. It’s in a fighting mood.”

Asked when the time would be right for Saudi-Iranian dialogue, Nawaf Obaid, a fellow at the Belfer Center for Science and International Affairs at Harvard University’s Kennedy School of Government and an Al-Monitor contributor, set the bar high. He told Al-Monitor, “The time will be right when there is a final settlement in Syria and when the Iranian role there is destroyed.”