The high price for neglecting Palestinians in Israel

Growing frustration after years of discrimination and neglect is leading Israeli Arabs to identify with their West Bank brothers even as they attack their countrymen. 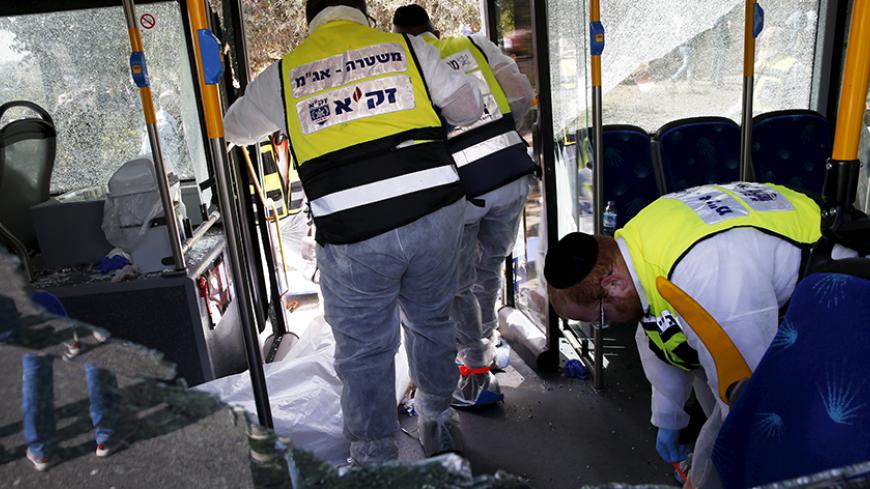 Members of Zaka Rescue and Recovery team stand aboard the bus on which Palestinian men armed with knives and a gun killed at least two people and wounded several others in Jerusalem, Oct. 13, 2015. - REUTERS/Ronen Zvulun

Prime Minister Benjamin Netanyahu is right: Israel is truly a dangerous place. Thousands of Hezbollah missiles are pointed toward northern Israel. It’s only a matter of time before the rocket fire on the region surrounding the Gaza Strip reaches its rate prior to the 2014 Operation Protective Edge.

On the Golan Heights, one can hear the echoes of the war the Syrian army is conducting against the opposition and Islamic State militants. The eastern neighbor, Jordan, is collapsing from the burden of refugees from Syria, and the prime minister has promised to build a fence along the Jordan River to block armed terrorists from crossing. Even the seashore was until recently under attack by poisonous jellyfish. And then there is the deepening hegemony of Iran in the region since the nuclear agreement signed in Vienna went into effect. A senior diplomatic source told Al-Monitor this weekend that Iran’s minister of defense will hold a coordination meeting in the next few days in Beijing with his colleagues from Russia and China. And while all this is happening, the fight that most concerns the United States, Israel’s patron, is next year's race to the White House.

This list of dangers facing Israel could cause any reasonable person to lose sleep. But the topics of the day at the gym and in line at the bank and the supermarket, are knives, stones and cars driven by assassins. During the second intifada, one could blame the “Oslo Accord criminals” for signing an agreement that allowed the Palestinian Authority to arm police in Ramallah and Gaza with guns. Today, many terrorists hold an Israeli ID card along with their knife. The stones are thrown by youths who were born in the “city joined together,” which has become a city terrorized together.

At the height of the wave of suicide attacks, in 2001, a motion was discussed in the Knesset, initiated by right-wingers, called “The need to create a parliamentary investigative committee on the topic: Why did they give guns to Palestinians?” It’s interesting to consider whether they knew Israeli poet Nathan Alterman, who wrote the lines, “Nurse, one moment, I’ve two loved ones, fine good-hearted sons. When my day comes, oh for heaven, Don’t you give them guns!” Today, a new investigative committee should be created to discuss the question of why "they" gave the Palestinians the knives, screwdrivers, stones and cars used to run over Jews.

The first witness the committee should question is the prime minister. It should ask him if he was aware of the contribution of his saying, “Arab voters are coming out in droves to the polls” — a clip of which he posted on his Facebook page on election day — to the sense of anger, estrangement and neglect felt by Palestinian Israeli citizens. If he answers in the negative, he should immediately submit his resignation, as he suffers from stupidity, apathy and vulgarity. If he explains that he didn’t correctly estimate the extent of insult to a fifth of the nation’s citizens and didn’t anticipate the serious consequences for their relations with the ruling majority, the prime minister should at least prove that he learned a lesson from it. He must first publicly apologize for the hurt of all supporters of democracy in Israel. Not in a staged meeting with Likud activists from the Arab, Druze and Circassian sectors, who greet him with applause, Netanyahu must do so with a speech to the nation, given with the same passion with which he warned of the Iranian danger. He should ask forgiveness and declare that the State of Israel is the state of the Jews, but also the state of all its citizens, irrespective of religion, race or nationality.

Netanyahu's instruction to right-wing ministers to refrain from visiting the Temple Mount is like giving expired aspirin to a patient with metastasized cancer. To prevent the violence plaguing Israel from becoming a fatal disease, we must take steps that are appropriate to the extent of the danger. When the Arab sector is burning and Jerusalem is deteriorating, talk is not enough, especially when the speaker is Netanyahu. It is time to dust off the Or Commission Report, which dealt with the events of October 2000, when 13 Arab demonstrators were killed, and immediately implement its recommendations for closing the wide gaps between Jewish and neighboring Arab municipalities in the fields of education, health, infrastructure and policing. First and foremost, the police’s fatally trigger-happy tendencies toward Arab citizens must be addressed. (Since the second intifada, when 13 Arab citizens were killed, police have killed 51 Arab citizens, compared with two Jewish citizens.)

A Jew who dares visit Akeb, the northernmost of Jerusalem's neighborhoods, bordering Ramallah, or the Shuafat refugee camp, would not find it hard to understand why youths from these neighborhoods stab Jews and throw stones at them. They count among the 60,000 “Jerusalemites” who live between the separation wall and the territories of the PA, in what’s called the Jerusalem environs. Stepchildren to two peoples. Five minutes’ drive from the villas of the Jewish Givat Hamivtar Jerusalem neighborhood live unemployed and desperate people, neglected by the state. In July 2005, Ariel Sharon’s government decided to “settle the situation of the residents of the Jerusalem environs.” The government decided to allocate special budgets to the Jerusalem municipality to improve roads and public transportation there, upgrade the education system and establish post offices and various government ministries. Netanyahu was then at the end of his term as minister of finance. The man who has served for six years as prime minister holds the majority of the responsibility for the dissolution of the plan and the violent consequences of that disgrace.

These steps are necessary and urgent, but in no way are they enough. We should expect that Netanyahu, a genius at plucking the heart strings of solidarity of Jews abroad with their brothers in Israel, would understand that Palestinians in Israel also feel solidarity with their people, even when it goes against their government. Thus, for the once united town of Baqa — which was split in two after the 1948 war — as long as the Palestinian residents of the West Bank town Baqa al-Sharqiya live under Israeli occupation, the Arabs of the Israeli town Baqa al-Gharbiya, who identify with the Palestinian nation, will identify with them — even against their government in Israel. Sadly, and fearfully, we are all paying the terrible price.