Israelis do not want a leader with vision

Israelis no longer want a leader with a vision, but rather a “strong leader” who will threaten the Palestinians with harsh actions and retaliation. 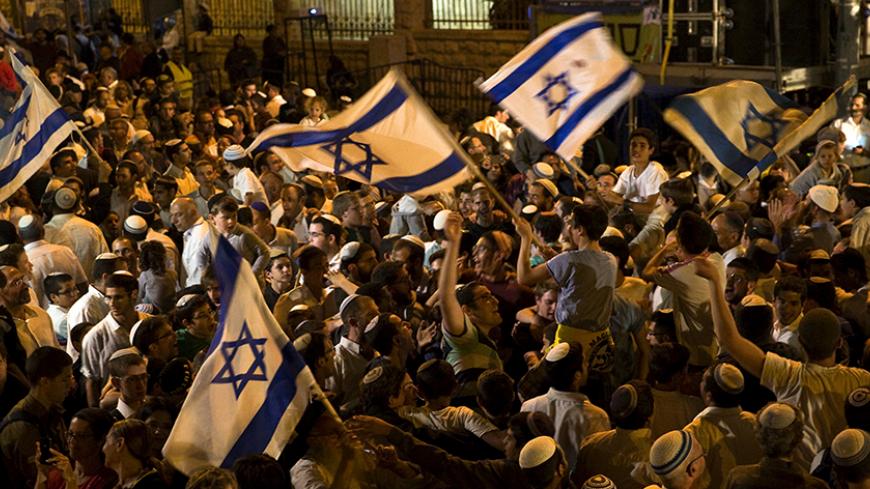 The morning of Oct. 7 began with a report of another knife attack in Jerusalem; the female attacker was shot and badly wounded. The police cordoned off the area, and the Shin Bet started an inquiry. Soon, the terrorist’s home will be demolished. Then, God forbid, we will hear of another Jewish family murdered on their way home to one of the settlements in the West Bank. Their friends will shout in front of the prime minister’s residence that we need a “strong hand” against the Palestinians. Neighbors will lay a cornerstone for another illegal outpost in the name of the victims, and hot-blooded youths will go out to set fire to the Arabs’ wheat fields in the adjoining village (the word “Palestinian” isn’t recognized in the language of the settlers). A few days ago, an exclusive video was broadcast on TV showing Israel Defense Forces Mista'arvim commando soldiers disguised as Palestinians charging into a hospital in Nablus and dragging out the suspect in the Oct. 1 murder of the Henkin couple; the suspect allegedly was injured in the attack. In the margins of the newscast it was mentioned that a Palestinian youth who was shot to death in Bethlehem was in the wrong place at the wrong time. Does someone remember his name?

In the years following the signing of the Oslo Accord — in September 1993 and the months of the brief governments of Shimon Peres and Ehud Barak — the following became a familiar script: A Palestinian terrorist murders Israelis on their way to a settlement; Israeli security forces raid the neighboring Palestinian village; dozens of men are taken for questioning; the suspects are arrested, their homes demolished; Prime Minister Benjamin Netanyahu addresses a protest rally against the government; the right accuses the “criminals who signed the Oslo Accord” of helplessness in the face of terror and calls for responding by building settlements throughout the territories. As the chairman of the opposition in those days, Netanyahu vigorously objected to the release of terrorists from prison, which was meant to be an incentive in the diplomatic process. He argued that the release of 400 Palestinian prisoners, a gesture by the Ehud Olmert government leading up to the Annapolis summit in 2007, was “not a path to peace but to terrorism.”

The fact that four years later his government decided to release 1,027 prisoners, including murderers, in exchange for the release of Israeli kidnapped soldier Gilad Shalit, should not be held against Netanyahu. These are the rules of the political game. In the mid-1970s, US President Gerald Ford explained to Prime Minister Yitzhak Rabin why he broke his promise, made as a congressman, to transfer the US Embassy from Tel Aviv to Jerusalem, with the words, “Life looks completely different from the Oval Office.” The phenomenon that should concern any Israeli, or friend of Israel, is that the rules of the political game accepted in the democratic world have expired. The coalition behaves like the opposition and the opposition behaves like the coalition. French philosopher Rene Descartes' pronouncement that “I think, therefore I am” has turned into “I shout, therefore I am.”

On the evening of Oct. 5, at the end of the holiday of Simchat Torah, Israeli citizens, young and old, schoolchildren and university students, watched as three members of the government — Ministers Haim Katz, Yariv Levin and Zeev Elkin — protested in Jerusalem against the policy of their government. These were not the ministers of HaBayit HaYehudi, who have turned protest against the government they are part of into a routine; these are senior members of the Likud, the ruling party, headed by the prime minister. “I haven’t come to protest against the prime minister. I came for an end of Simchat Torah event,” Katz, minister of welfare services, said. Right after he said that, he shouted into the microphone to the crowd, “We have to dramatically intensify the punishment and place responsibility for [the actions of] children on their parents.” Needless to say that, according to him, this rule should be applied only to Palestinian children. Furthermore, he stated that the freezing of settlement construction “encourages the children of evil.” Indeed, a minister accuses the government, which includes himself, of encouraging terrorism against his people. Levin echoed these words, when he said that he “looks forward to hearing even tonight of city planning authorization and construction permits, which will enable us to defeat terrorism in the most Jewish way possible.”

The chairwoman of the Meretz Party, Zehava Gal-On, wrote about this on her Facebook page: “How shameful. How do you dare join the protesters as if you have no responsibility for this situation? You’ve been in power for years, and the only thing you have to offer is to attend demonstrations and to shout that we need to exert more force? You’re the government, who is stopping you?” The chairman of the opposition, Zionist Camp leader Isaac Herzog, on the other hand, blamed Palestinian President Mahmoud Abbas. He accused the Palestinian leader who dared attack the occupation, saying that his speech at the United Nations on Sept. 30 regarding the apartheid regime in the occupied territories “serves extremists on both sides.” The leader of Yesh Atid, Yair Lapid, made Abbas into a direct agent in the murder of the Henkin couple. According to Lapid, this murder “is a direct outgrowth of Abbas' policies of incitement and lies.” They have already forgotten how the Dawabsha family was burned to death in Douma on July 31, and moved on following Minister of Defense Moshe Ya’alon’s statement that “we know who’s responsible, but are not revealing it so as not to disclose intelligence sources.” It’s not hard to guess what they would say on the right if such things were uttered by a left-wing minister of defense, in case of a Jew burned to death.

Israel's first prime minister, David Ben-Gurion, whose 129th birthday will be marked on Oct. 16, wrote in his book "Eternity of Israel" that “vision is the secret of our existence, the secret of our revival.” He supported his words with a quote from Proverbs 19:18, “Where there is no vision, the people perish.” Ben-Gurion looked more than one step ahead when it came to questions of when to fight and when to compromise. He took risks and had his share of mistakes. In the political lexicon of the man who sits in his chair, Netanyahu, the word “vision” does not appear. Tragically, the people do not want a leader with a vision. They want a “strong leader” — one who is verbally strong.