Some commentators argue that Jordan's lack of comment on Russia's involvement in Syria is related to the kingdom's acceptance of Moscow's position that Syrian president Bashar al-Assad be part of a postwar transitional phase. 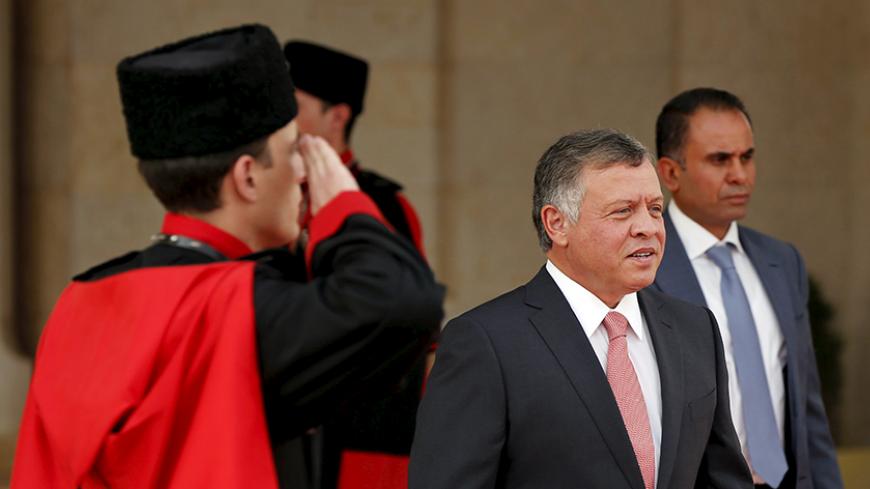 The Jordanian government had not commented on Russia’s military involvement in Syria, and local observers predict that an official, clearly stated position is unlikely anytime soon. Attempts by Al-Monitor to obtain a response from the government’s spokesperson, Mohammed al-Momani, have been unsuccessful.

On Oct. 5, less than a week after Russian fighter jets launched their first airstrikes against targets on Sept. 30, King Abdullah met with Valentina Matviyenko, chairwoman of the Russian Federation Council. According to the Jordan Times, a royal court statement said the meeting focused on the depth of Jordanian-Russian relations and bilateral economic relations. The newspaper also reported that the king had emphasized “the importance of supporting regional and international efforts to neutralize the dangers threatening global security and stability,” while Matviyenko stressed that “Russia has exerted efforts to arrive at a political solution in Syria and the importance of international cooperation against Daesh [the Islamic State, IS].”

Unlike Egypt, whose foreign minister, Sameh Shukri, has voiced his country's support for the Russian intervention, Jordan will be careful not to upset its two main allies, Saudi Arabia and the United States, which are wary of Moscow’s latest moves. Shukri told Al-Arabiya TV on Oct. 4, “The information available to Egypt through direct contact with the Russian side affirms Russia’s eagerness to counter terrorism and confine its spread in Syria and that the reason for its intervention is to deal a fatal blow to IS.”

Political analyst Fahd Al-Khitan told Al-Monitor that Jordan will remain neutral on this issue. “Jordan will not sacrifice its good ties with Russia over the Syrian issue, especially since Russian support of the Damascus regime is nothing new,” he said. According to Khitan, Jordan had previous knowledge of Russia’s intention to intervene in Syria, “just as other regional and international powers had earlier knowledge,” but he added, “Our calculations differ from those of Washington and Riyadh, and the fact that we are allies with both does not mean that we have to adopt the same position,”

Jordan had always backed a political solution in Syria, even when it was under pressure from its Saudi and American allies to provide support to the so-called moderate Syrian opposition, especially in southern Syria. At the beginning of the crisis, Jordan was an active member of the Western-backed Friends of Syria group. It hosted one of its meetings in Amman in May 2013. As the crisis dragged on and jihadi groups arrived on the scene, Jordan chose to take a more balanced stand. The Syrian Embassy in Amman remains open, as does the Jordanian Embassy in Damascus. Visits by Syrian National Coalition members to Jordan became increasingly fewer in number until they stopped entirely.

Jordanian officials have always denied Syrian allegations that the kingdom had supplied rebel groups with arms and training and the existence of a secret operations room to coordinate contacts with the rebels from Amman. Pundits recently noted that Meshaal al-Zabin, head of the Jordan armed forces, had sent a congratulatory message to his Syrian counterpart on the occasion of Eid al-Adha, a gesture interpreted as a sign of goodwill.

Political commentator Omar Kullab told Al-Monitor that although Jordan will not comment on the Russian intervention, it fully backs it. “I believe there is high-level coordination between Jordan, Russia and Syria, and security contacts between Amman and Damascus have not stopped,” he said. Kullab believes Russia's involvement will secure two goals that Amman supports — fighting terrorism and finding a political solution to the Syrian crisis.

Jordan was among the first countries to join the US-led coalition formed in September 2014 to counter IS in Syria and Iraq. King Abdullah had repeatedly warned of the danger that Islamist militants posed to regional and world stability. In his Sept. 28 speech to the UN General Assembly, the king likened the struggle against what he described as “outlaws” to a “Third World War.”

Local observers contend that Jordan, like its Arab allies, including Egypt and the United Arab Emirates, think that taking on IS is a bigger priority than the removal of Syrian President Bashar al-Assad. There have been indications that the three countries now accept the Russian position that Assad be involved in a transitional political phase, postponing his departure until later. This view contrasts with the Saudi and US position that Assad can have no role in Syria’s future.

Kullab said Jordan's position is necessitated by the United States having failed to defeat the militants or arrive at a political solution to the 4-year-old civil war. “For Jordan, a solution in Syria will also resolve the challenge of hosting more than 1.5 million Syrians on our soil, which is stressing our economy,” he said.

Another political commentator, Orieb al-Rintawi, agreed that Jordan supports the Russian role in Syria, although Amman has not said so publicly. “As Russia takes over in Syria, it will also be forced to find a political solution once the dust settles,” he told Al-Monitor. “The political transition battle will prove to be as difficult and as challenging as the war against IS.”

Regardless, observers question the reasoning behind Moscow not inviting Jordan to a proposed meeting of a contact group on Syria in Moscow this month. On Oct. 2, the Jordan Times, citing an official source, reported his position as being “Jordan is an essential party to any discussions related to Syria, indicating that Moscow is expected to invite the kingdom to take part in the conference.” In addition to Russia, the proposed meeting might include Egypt, Iran, Saudi Arabia, Turkey and the United Arab Emirates.