Palestinians fired in retaliation for protests

Israeli employers are dismissing Palestinian workers in settlements in the West Bank and Jerusalem, a trend with dire consequences for Israel's economy. 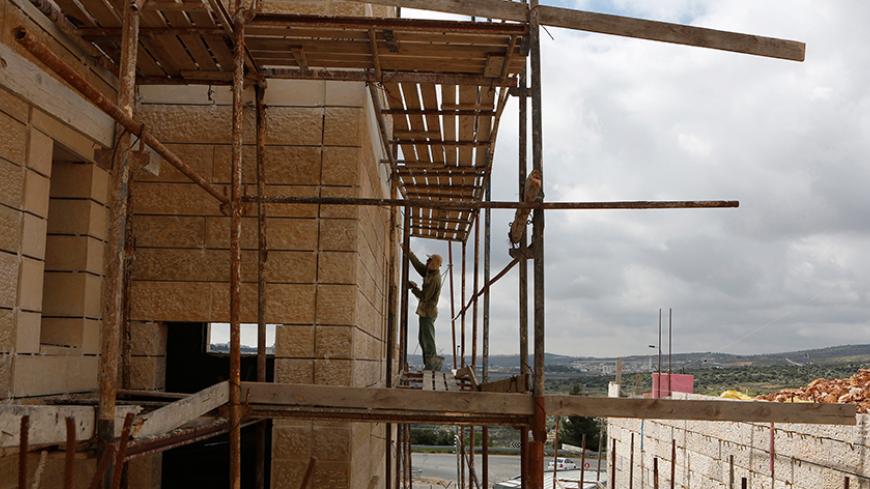 A Palestinian laborer works on a construction site in the West Bank Jewish settlement of Har Gilo, near Jerusalem, March 18, 2013. - REUTERS/Baz Ratner

The protests and violence that have marred the Palestinian territories since early October are now casting their shadow on all aspects of life there, including the economy and especially the working class, the first to pay the price of the ongoing unrest. Dozens of Palestinian workers have been dismissed from their jobs in Israeli settlements, in the West Bank and Israel, while tens of thousands fear they will be next.

Mohammed Saeed, a resident of Ramallah in the central West Bank, worked in an aluminum plant in the settlement of Beit El, northeast of Ramallah. He told Al-Monitor that the plant owner fired him one week after the unrest broke out.

Saeed, now unemployed, explained that he and a number of his coworkers were dismissed because of Israeli settlers’ fear of being attacked. He added that the firings coincided with the new security measures to prevent workers from entering the settlement.

Moaz Shlodi said the owner of the Jerusalem car wash where he worked fired him for answering the Palestinians’ call for a strike Oct. 13 in protest of the way Israeli soldiers treat Jerusalemites. He noted that the majority of the car wash's customers are Israelis, adding, “When Israelis know that a Palestinian is washing their car, they treat him with haughty contempt and look down on him.”

In the same context, Palestinian Wafa Abu Jemaa said she was fired from her social services job in a Jerusalem home for the elderly for participating in activities in support of Al-Aqsa Mosque before and during the current unrest. She had worked there four years.

“I had a strong and good relationship with my colleagues and the elderly there, but one of my Israeli colleagues took a picture of me at one of the events in support of Al-Aqsa Mosque. I was referred for investigation at the Israeli police station and was told I was fired,” Jemaa told Al-Monitor.

She added that four of her Palestinian colleagues also were fired. One of them was accused of posting provocative statements on his Facebook page.

Osama Shetat, who lives in Biddya village in Nablus, confirmed that he lost his job in Ariel — the largest West Bank settlement — a few days after clashes broke out Oct. 11. When he reached the settlement gate on his way to work, a security staffer said his permit had been withdrawn and he was fired, without any explanation.

“In the early days of the outbreak of clashes in the West Bank and Jerusalem, Israelis started treating us workers differently," Shetat told Al-Monitor. "The look in their eyes was scary, to the point that we were afraid to go out to buy food from the store in the settlement for fear of being attacked.”

He said dozens of his fellow construction workers were laid off, while two of his cousins stayed home from work because they feared settlers' reactions.

Israeli Channel 10 reported Oct. 18 that large numbers of Israeli building contractors are taking financial losses rather than allowing Palestinians to work for them.

On Oct. 18, local authorities in Israel barred Palestinian school workers from entering the buildings, although they did allow Palestinian cleaning staff in after hours, accompanied by school officials.

According to a report issued in early March by the Central Bank of Israel, the number of Palestinians residing in the West Bank and working in Israel reached around 92,000 in 2014, about 2.2% of total workers in the Israeli economy.

For his part, Shaher Saad, secretary-general of the Palestine General Federation of Trade Unions, told Al-Monitor that he has not seen statistics on Palestinian workers who have been laid off, but that the available evidence suggests that the number of dismissals is not substantial.

Saad pointed out that most of the dismissals have been in Jerusalem and some West Bank settlements, such as Beit El and Ariel, after the heated clashes in these areas. He called on Palestinian President Mahmoud Abbas to work with the International Labour Organization to help Palestinian workers obtain their rights.

Mahmoud Abu al-Rab, an economics professor at an-Najah University in Nablus, believes the layoffs will negatively impact the situation of Palestinian workers and increase their unemployment rate.

Speaking to Al-Monitor, Abu al-Rab did not rule out the possibility that the layoffs could include tens of thousands of workers in Israel and Israeli settlements if events continue to flare in the Palestinian territories. He added that Israeli factories will also be affected and will not be able to bear the economic losses resulting from layoffs.

He called on the government and nongovernmental institutions to shoulder their responsibilities toward those who have been fired and help them make ends meet.

Despite the prevailing belief that Israel cannot dispense with Palestinian workers, particularly in the field of construction, their fate remains to be seen.