The deputy commander of the Islamic Revolutionary Guard Corps addresses the number of Iranian soldiers' deaths recently in Syria. 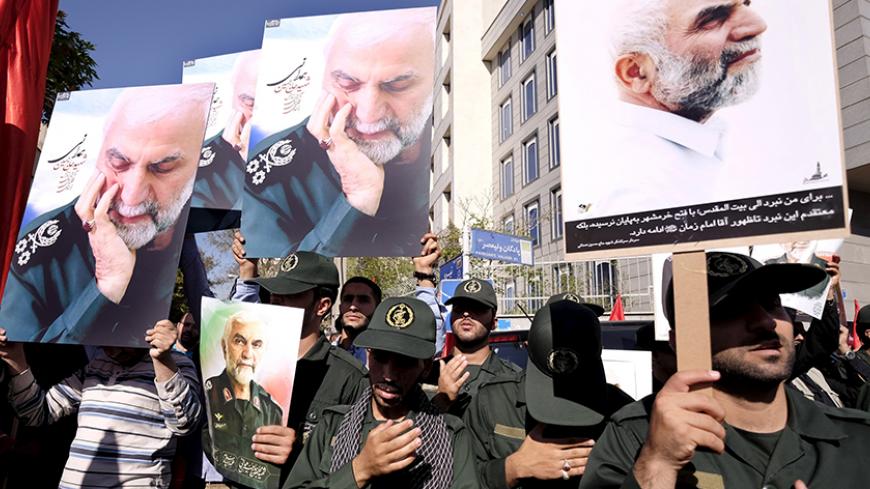 When Russian airstrikes began Sept. 30 against Syrian armed opposition fighters, they were reportedly accompanied by Syrian troops and Iranian advisers on the ground. However, after more than a dozen Iranian soldiers died in less than a month, including the highest-ranking Iranian general to be killed in the 4½-year-old civil war, Iranian authorities and media have been put in the position of explaining the death toll.

In an interview on Iranian television Oct. 26, the deputy commander of the Islamic Revolutionary Guard Corps, Gen. Hossein Salami, spoke about the latest developments in Syria. When asked about the number of recent IRGC deaths, Salami said that a few months ago the Syrian government requested advisers to help rebuild its army for “a large [military] operation.”

To give effective advice, IRGC soldiers had to visit the front lines and become familiar with the reality of the battlefields, Salami said. It wasn't possible “for them to sit in a room and help the Syrian army.” While some estimates have put the recent IRGC deaths as high as 20, Salami said, “The number of [deaths] is not high, but in comparison with the past it appears to be more.” Iranian officials rarely explain how IRGC soldiers are killed.

Hassan Shamshadi, a reporter for Islamic Republic of Iran Broadcasting who appears to have firsthand access to the battles in Syria and is often the first to report the deaths of Iranian soldiers, wrote on his Instagram page Oct. 25 in response to questions about the number of deaths.

Shamshadi first explained the importance of the latest developments in Syria for both the government and Shiites, writing that the current battle around Aleppo and Latakia took five months to plan. He said the operation resulted in the Syrian government taking back 62 square miles of land it had not held for years. The army plans to extend the operation to Al Fu’ah and Kefraya, two towns with a Shiite population of 30,000 surrounded by “terrorists who have promised to commit genocide when they enter the two towns,” Shamshadi said.

Iranians are playing “an important and determining role in this battle,” he said, adding that the larger presence of Iranians “will naturally result in an increase of the number" of dead and wounded.

Despite the number of deaths, Iranian officials do not seem deterred. In the television interview, Salami said Syria’s and Iran’s national security are tied together, and Iran’s presence in Syria, “in addition to [religious] aspects, has strategic aspects.” Iranian soldiers killed in Syria are described as “defenders of the Shrine" of Zeinab, which is just outside Damascus and important for Shiites. Salami, repeating a long-held Iranian position, said the plan to overthrow the Syrian government is part of a larger US plan that includes going after Lebanon next, presumably meaning Iran’s ally in Lebanon, Hezbollah. Rather than viewing Iran’s efforts as propping up President Bashar al-Assad’s government, Salami said Syria is “the front line against the American and Zionist regimes.”