Corruption seems to be behind the failure of construction and development projects in Iraq. 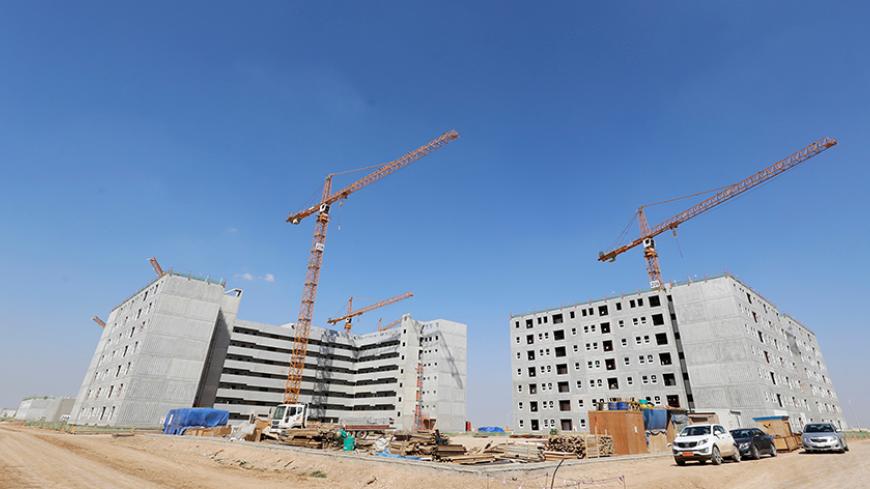 A general view of the buildings at Bismayah residential project in Baghdad, Feb. 26, 2015. Bismayah New City, which aims to house half a million people within four years, dwarfs any construction project Iraq has attempted in a generation. - REUTERS/Thaier Al-Sudani

BAGHDAD — Since the fall of Saddam Hussein's regime following the US-led invasion of Iraq in 2003, there have been hundreds of failed and delayed construction and development projects in the country. A few months after it was built, the wall of the Imam Al-Hadi elementary school in Husseiniya, in northern Baghdad, collapsed on the night of Feb. 27; in November 2014, the local government in Babil withdrew the al-Tahmaziya street pavement project in southern Hilla from the contracting firm due to delays in the project’s implementation; and the local government of Dhi Qar province, 375 kilometers (217.5 miles) south of Baghdad, took away the licenses of 50 companies to delay the implementation of projects.

Despite the state’s budgets reaching record figures, as oil prices were close to $100 a barrel, these projects were not accomplished. Minister of Oil Adel Abdul Mahdi said Aug. 17 that Iraq’s budget between 2003 and 2015 reached $850 billion.

However, today and in light of the 50% decrease in oil prices, the implementation of these projects has become difficult, if not impossible.

On the reasons behind the negligence, Kahtan al-Sultani, head of the senior engineers at the Iraqi Ministry of Municipalities and Public Works, told Al-Monitor, “The main causes of failure [to implement projects] are reflected in the poor quality of the completed projects, and noncompletion of others. This is because the projects were given to companies based on official contracts, knowing these companies are not up to the standards required and are run by contractors connected to corrupt officials and politicians.”

Sultani said, “The failure is mainly [apparent] in the sewage and road pavement projects, while the renovation of old factories, which date back to tens of years ago, was ignored.” He added, “Bureaucracy and poor management of funds by some people focusing their attention on how to steal public money and give priority to partisan over national interests have increased this failure.”

In this regard, Mohsen Ali Atiyyeh, educational and political researcher, spoke to Al-Monitor on the reconstruction projects that have fallen into the hands of corrupt people and virtual companies. He said, “The reconstruction projects have become the entry gate to loot public funds, through virtual companies owned by influential figures who acquired contracts with fancy prices and sold them to corrupt subcontractors.”

Atiyyeh added, “The most prominent example is the project to [supply] steel structures for school buildings, which was supposed to be implemented by an Iranian firm that was contracted in 2008. Yet the project was not completed because the firm left Iraq.”

“Iraq’s losses in this project amounted to 282 billion Iraqi dinars [about $249 million],” the Iraqi Commission of Integrity stated on Aug. 5, 2013.

This phenomenon is confirmed by Transparency International, which said in a report cited on the Iraqi al-Taghier TV channel on May 3 that Iraq is the third most corrupt country in the world.

Al-Monitor talked with Abbas al-Musawi, the media adviser to current Vice President Nouri al-Maliki, about his opinion on the reasons behind the failure of the construction and development projects. He said, "There is a lack of contracting with international investment companies. They were replaced with local companies that lack competence and experience in planning and design, and most of which are owned by corrupt contractors.”

Musawi added, “There is also the issue of centralization in approving the projects and expenditures on these projects, as the provinces are not given the powers that facilitate the direct implementation of the projects.”

It seems that the government tried to fix the issue of centralized management for construction projects. On Jan. 18, the Ministry of Municipalities announced the transfer of powers to the provinces, in implementation of the amended Law No. 21 of 2008. According to this law, the powers of eight federal ministries will be transferred to local governments in a period of time not exceeding two years. Musawi considered it “a good step in order to accelerate the implementation of reconstruction projects and free them from the routine and centralization in decision-making.”

Journalist Wajeeh Hadi, who focuses in his weekly TV show on Alahad satellite channel on revealing corruption that these projects suffer from, told Al-Monitor, “The political parties’ interests are a key reason for the widespread corruption in these projects.”

Regarding the rampant corruption in development projects and construction management, Hadi reiterated that the contractors acquire the money allocated to development and construction without implementing them in several provinces. The incident in the housing complex in Dhi Qar province, where the contractor disappeared in 2011 while less than 5% of the project was completed, is one of dozens of projects where the law was not implemented.

The volatile security situation, even in the relatively calm areas, also hindered the reconstruction projects. In September, the police in the Basra governorate revealed that more than a quarter million dollars was stolen at gunpoint from a contracting company manager; these were the funds that were allocated to reconstruction projects.

Amer al-Midhati, an engineer in Babil governorate, told Al-Monitor that the reasons behind the failure of reconstruction projects “is contracting with inexperienced or fictional companies whose work is not scrutinized due to the corruption network, and the fact that contractors are using funds without any monitoring while splitting them with officials.”

It seems that the solution to this phenomenon is to work with foreign investment companies that have experience in the construction field. The implementation of projects should no longer be monopolized by the central government but rather by the provinces, which would help achieve high success rates in completing the lagging projects and the implementation of new ones.

However, international companies will not operate in Iraq unless the security situation becomes stable for them to achieve better results. There are several intertwined problems that need to be resolved, and this goes beyond the technical frameworks and reach the political decision-making.