Corruption involving public contracts has become prevalent in Iraq since 2003 and is difficult to stop because government officials are benefitting from it. 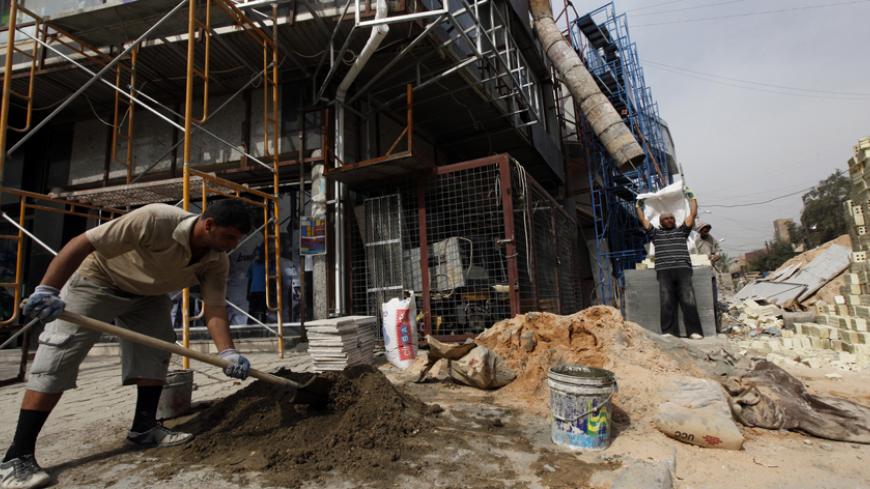 BAGHDAD — An Iraqi contractor who works on road pavement and sewage projects in the Iraqi capital told Al-Monitor, “Government officials as well as senior contractors related to them have stakes in most, if not all, of Iraq’s construction projects, which are sold to executing contractors at a price that guarantees their implementation with the minimum level of specifications and at the lowest cost.” Speaking on condition of anonymity, he said, “This revelation is not a secret. It is a fact that the people, government officials and the media continuously talk about.” The contractor's assertion was supported by a statement issued by Baghdad province Jan. 19, reporting that 42 people had been referred to the Commission on Public Integrity for corrupt practices involving projects in Baghdad.

Bahaa al-Shammari, a civil engineer who has worked on several reconstruction projects, told Al-Monitor, “It's not just about financial corruption, but administrative corruption and circumvention of the law as well. Officials are resorting to their relatives and friends by registering companies in their names for form’s sake when these companies do not have skilled technicians or mechanisms. With the help of officials, [the companies] sign a contract to rebuild a school, for example, and they carry out the projects either by selling it to another contractor or by recruiting workers and developing mechanisms. This ultimately leads to failed projects.”

In Mahawil city, north of Babylon, a contractor with limited resources was paving a street. He told Al-Monitor on condition of anonymity, “[I] only got a street pavement contract after hard efforts and after [I] had to offer employees and officials several gifts. I will do my best to do a good job, but the problem is the lack of allocated money.”

Makki Hassan, a member of the municipal council in the western Hamzah area, 30 kilometers (18 miles) south of Babylon, told Al-Monitor, “The money allocated for projects is sufficient in most cases. But passing the money through intermediaries and chain contractors reduces effective spending on the project to no more than 20% of the original amount.”

Abdul-Zahra al-Hindawi, spokesman for the Ministry of Planning, said in remarks to the media last Sept. 14 that Iraq needs to enact a law to forbid secondary contracts on strategic projects, as this hinders the implementation of development plans. He further said, “Many companies are unable to implement the projects assigned to it, because they do not have the required capacities.” This, he said, is also corruption.

The Iraqi author Hussein Husseini told Al-Monitor, “Corruption in infrastructure projects is widely linked to political corruption, and political officials are often directly involved in it.” He explained, “Contracting projects in Iraq are investment projects monopolized by a group of parties and influential people in power. They finance themselves through these contracts, while each party covers for the other.”

Husseini, who writes on Iraqi affairs in Baghdad, said, “The contracting process goes through several stages of coordination and planning among influential officials and contractors. The first step is starting the contracting as well as securing the money for it. The amount is then doubled to make room for bribery, embezzlement and manipulation.”

According to Husseini, “Following the amount estimation stage comes another stage, which is determining the contractor or the company based on a prior agreement with government officials. Ultimately, the project is implemented with minimal specifications to achieve higher profits.”

According to Qasim Mozan, a reporter for Al-Sabah newspaper, “The phenomenon was exacerbated after large amounts of money were allocated for reconstruction [projects] after the war ended in 2003.” He told Al-Monitor, “Some citizens saw projects being sold in the cafeterias of municipal councils.”

He further stated, “Contractors are associated with parties and politicians, and they received huge sums while the projects remained inactive or were badly implemented.” He explained, “I learned about this because I work in the media, and I have been reporting the activities of the municipal councils for several years.”

Despite the billions spent on infrastructure reconstruction since 2003 on projects carried out by contractors and other businessmen, the project stalls are clear and still cause political and media controversy. Last May, Hadi Salami, chairman of the Integrity Commission in Najaf, issued a statement asserting, “There is fraud affecting most of the projects implemented in Najaf.” Saja Bassem, an economic researcher and feminist activist in Babylon, told Al-Monitor what is actually accomplished by such corruption, stating, “This rampant corruption resulted in the emergence of wealthy people in the community. Up until a couple of years ago, they had little money.”

Ali Alobodi, a journalist and director of media relations for the Najaf government, established a link between “contracting corruption in Iraq and the partisan and sectarian quota system.” He told Al-Monitor, “Parties are covering up the corruption of each other, which leads to a loss of money into the pockets of the corrupt, because of the lack of real tenders or clear agreements. This, in turn, doubles the real cost of projects.”

Corrupt contracting practices in Iraq are only one part of a broader culture of corruption that no one has been able to change, despite government efforts enlisting international assistance, such as the Boen International Group and media and popular calls to end to it. The difficulty appears to lie in the persistence of political parties, officials and contractors reaping the benefits.