As the political divide and violent protests worsen in Iraqi Kurdistan, will Baghdad be able to keep the situation under control through peaceful means? 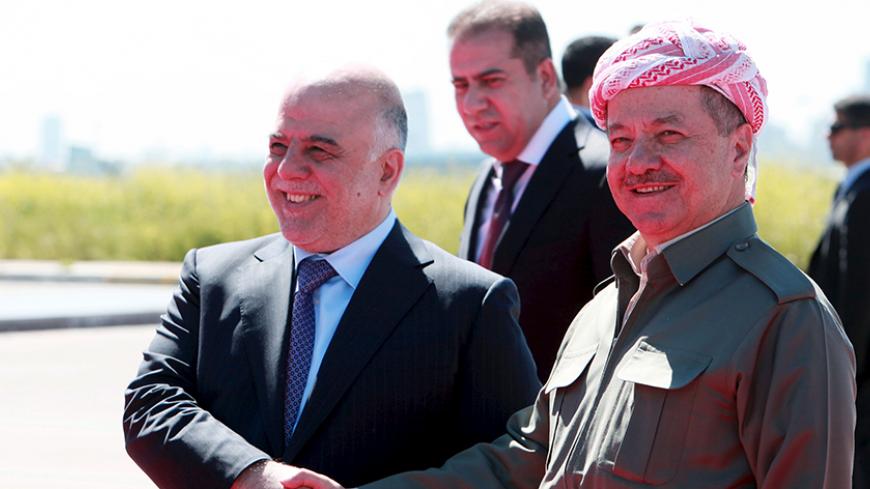 A weak and divided Baghdad has been unable to play an effective role in solving the various central administration-related crises in Iraq, such as the Iraqi Kurdistan crisis. The opposition is accusing Iraqi Kurdistan President Massoud Barzani of seeking to extend his presidential term, in light of ongoing popular protests in Kurdish cities. Competing political parties are accusing each other of being behind the protests, when for many years the Kurdistan Region had witnessed political stability.

Given the protests and acute political rifts among the Kurdish parties, it is necessary to raise questions about Baghdad’s ability to help contain the crisis, provide solutions and an appropriate environment for dialogue and mediate among the conflicting parties to restore political stability.

The conflict — among the Kurdistan Democratic Party (KDP), the Patriotic Union of Kurdistan (PUK), the Movement for Change and the Kurdistan Islamic Union — broke out in August toward the end of Barzani's presidential mandate, which according to the region’s electoral law, cannot be extended.

Kurdistan is facing major obstacles to holding elections: a lack of necessary funds and security in light of the war against the Islamic State. This is in addition to the existing crisis over the region's form of governance, which pushed the PUK, the Movement for Change and the Kurdistan Islamic Union, as well as the Kurdistan Islamic Group, to propose a shift from a parliamentary to a presidential system.

The conflict, however, soon spiraled out of control, spilling over from political corridors and parliament into the streets of Iraqi Kurdistan, where demonstrations started in September.

Adding fuel to the fire have been the dire economic conditions, the delayed payment of state employees' salaries and the rampant corruption in some government institutions. The demonstrations escalated into violent clashes between protesters and security forces. On Oct. 10, protesters tried to break into the headquarters of Barzani's KDP, prompting security forces to open fire, leaving three people dead and 18 injured.

Iraqi Prime Minister Haidar al-Abadi responded quickly to the events and on Oct. 11, called upon the Kurdish parties to maintain calm and "solve problems through dialogue, legal and constitutional means and avoid resorting to force.”

Under these circumstances, Baghdad must strive to find political solutions by bringing the conflicting parties together and pressuring them to make concessions to ensure political, economic and security stability. In addition to its symbolic status as the capital of all Iraq, including the Kurdistan Region, Baghdad has what it takes to act as a mediator and settle political disputes in the region, as all Kurdish parties have representatives in the Iraqi parliament and the various government institutions in Baghdad.

It is Baghdad’s opportunity to assume a vital central political position and rebuild bridges between the central government and Iraqi Kurdistan. Some political analysts argue, however, that Baghdad will not be able to pull it off, as it is preoccupied with equally important problems including its war on IS, the stifling economic crisis and the wave of protests sweeping many Iraqi cities.

Yet, that's no excuse for Baghdad to distance itself from the developments in Iraqi Kurdistan, which could send out the wrong message that it is being indifferent and is not making a sufficient effort to strengthen relations between Iraqis, and ensure stability throughout the country at this difficult time.

American, Iranian and Turkish representatives have visited Iraqi Kurdistan, and their efforts to reconcile the factions are ongoing — which raises questions about why Baghdad is absent, leaving its role to be filled by regional and international players instead.

A comprehensive look at the Iraqi crisis is necessary to find real solutions. As is the case with the entire Middle East, the Iraqi crises cannot be dealt with separately, for they are intertwined. Any collapse in Baghdad would have a domino effect on the situation in Iraqi Kurdistan.

The Iraqi government must make it a top priority to develop decentralized governance to ensure stability for the Iraqi areas around Baghdad. Thus, Baghdad should deal with the crisis in the Kurdistan Region as a fundamental problem, because preserving security in the region is as essential as the war on IS to maintaining Iraq’s stability.

A successful democratic experience in Iraqi Kurdistan could serve as a model for various regional governments that are likely to arise after the war against IS. It is also a key ingredient to preserving ties and unity between the different Iraqi components in the long run. By playing a positive role in Kurdistan’s crisis, Baghdad could pave the way toward setting differences between the Iraqi government and the Kurdistan Region.

Abadi has a solid reputation for impartiality among the different Kurdish parties. Therefore, he could serve as an objective intermediary and increase his chances to negotiate under the auspices of Baghdad.

It is the duty of the Iraqi government and Abadi in particular to work toward hosting the conflicting Kurdish parties in Baghdad and to foster comprehensive Kurdish dialogue to help reach a peaceful solution within the framework of democracy, to put an end to the crisis without harming Kurdistan's democratic gains.

This could be the key for Baghdad to reconcile all Iraqi parties to prevent major problems in the future, and to avoid a grinding political crises and a years-long absence of dialogue — precisely the kind of division that has allowed IS gangs to take over larger areas of the country as a result of the ongoing divide.