Amid a strong regional disagreement, Iraqi Kurdistan is insisting on holding a referendum on independence in the fall. 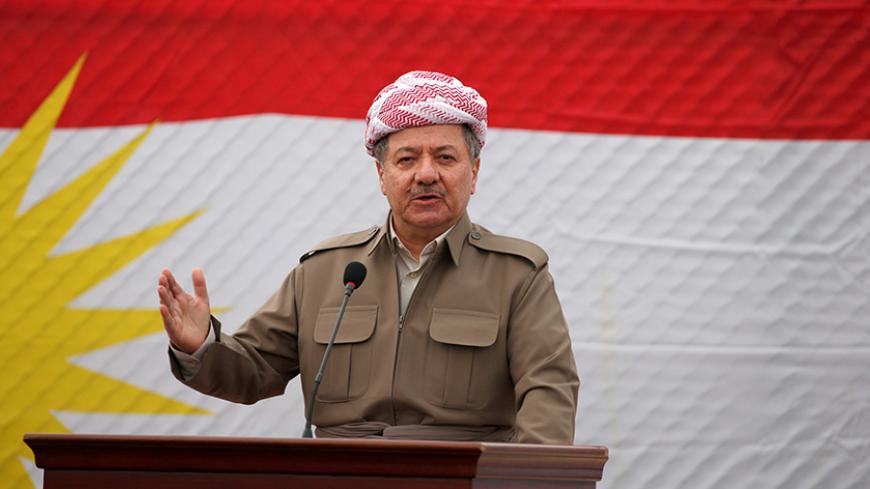 Kurdish Regional Government President Massoud Barzani speaks to the media during his visits in the town of Bashiqa, after it was recaptured from the Islamic State, east of Mosul, Iraq, Nov. 16, 2016. - REUTERS/Azad Lashkari

BAGHDAD — Iraq's Kurdistan Regional Government (KRG) announced May 24 that it had formally informed the United Nations Security Council of its intention to hold a referendum on the independence of Kurdistan through the UN special representative to Iraq, Jan Kubis.

The KRG is working on three levels to have this referendum held by the end of this year and make the Kurdish parties attain their goal. While the first level consists of solving the internal crises plaguing the various Kurdish parties, the second one consists of starting negotiations with Baghdad to secure “a smooth and peaceful independence.” The third level consists of reassuring the regional powers that independence will by no means damage the interconnected relations in the region.

On April 13, the KRG had announced that the referendum will be held in the fall and revealed the formation of delegations of the two main parties in Kurdistan, namely the Patriotic Union of Kurdistan (PUK) and the Kurdistan Democratic Party (KDP), to negotiate the matter with Baghdad, Iran and Turkey.

Asked about the negotiations aimed at solving this crisis, KDP member Sirwan Ismail told Al-Monitor that his party was responsive to the PUK proposals to solve the internal problems in Kurdistan, which will not hinder the holding of the referendum, because this referendum reflects the aspirations of all the Kurdish parties. As for the Movement for Change, which opposed taking part in the committee organizing the referendum, he said, "It is a small political formation whose position will not affect the Kurdish consensus.”

He said, “We believe that the referendum will be held under any circumstances, although we do not want it to be carried out without Baghdad’s approval. This is what we explained to the central government, which has yet to express a clear stance in this regard."

Ismail added, “The Kurdish delegations tried to reassure both Turkey and Iran that independence would not pose a threat to their interests and would not affect the Kurdish minorities. Moving forward, we will seek to have the blessing of other world powers."

But the PUK, led by former President Jalal Talabani, believes there is a 12-point road map that needs to be applied. The road map is mainly related to the “relations between the political parties in Kurdistan, especially the PUK and the KDP and between PUK and the Movement for Change. The items also require finding a solution to outstanding problems between Kurdistan and Baghdad and preparing for any scenarios that may roll out following the Islamic State phase.”

PUK member Farhad Kader told Al-Monitor, “The party supports the referendum, the necessity to solve the problems plaguing Kurdistan and the need to reactivate the paralyzed parliament, which must approve the results of the referendum according to the road map announced by the party a few weeks ago.”

Kader said that his party is in the process of “activating a prior agreement with the Movement for Change and the central government in Baghdad about the domestic problems in Kurdistan.” He added, “What concerns us is the position of Baghdad, which must accept the constitutional and legal right of Kurdistan to hold the referendum.”

In the meantime, the Iraqi central government headed by Prime Minister Haider al-Abadi is not yet ready to declare an open position on the Kurdish referendum project.

Parliamentarian for the Kurdistan Alliance Arafat Karam said May 25, “The Kurdistan government talked to Abadi and head of the Iraqi National Alliance Ammar al-Hakim about the matter — albeit unofficially — and the two promised they would find a solution to the outstanding problems and deal with them in a serious way and asked to postpone the referendum until further notice.”

Abadi’s position, which is based on sensitive calculations and complicated balances, shows that he does not want to engage in a new crisis with the Kurds on the issue of the referendum before the end of the war with IS, which is witnessing the highest levels of coordination between the Iraqi forces and the Kurdish peshmerga. His position also shows that he does not want to open another front of political confrontation while he fights undeclared wars with Shiite parties represented by the political forces that are allied with former Prime Minister Nouri al-Maliki, who is seeking to achieve a “political majority” all the while taking firm positions on the Kurds.

Baghdad, which has long opposed any cessation project in Iraq, may bet on the internal differences in the Kurdistan Region and perhaps the pressure exerted by the regional powers, especially Turkey and Iran, to hinder this independence, even though the United States recognizes the possibility of making the Kurdish dream come true and considers that Kurdish independence has become a question of “not if but when," as per a statement made May 23 by Lt. Gen. Vincent Stewart, the director of the US Defense Intelligence Agency.

The coming weeks will be fraught with changes, especially considering that Tehran has asserted that it will defend “the unity and national sovereignty of Iraq and will not accept the independence of the Kurds of Iraq.”

Almost the same position was announced by the Turkish government on April 1. This means that Tehran and Ankara will not stand idly by as Kurdistan seeks to achieve independence, and they will work to disrupt or thwart the Kurdish efforts in this regard. Meanwhile, Baghdad’s Sunni and Shiite political forces continue to oppose such a possible referendum.