Why does Hamas want third intifada?

Hamas appears ready to waive its use of armed violence to allow an intifada to gain momentum and for international recognition against Israel. 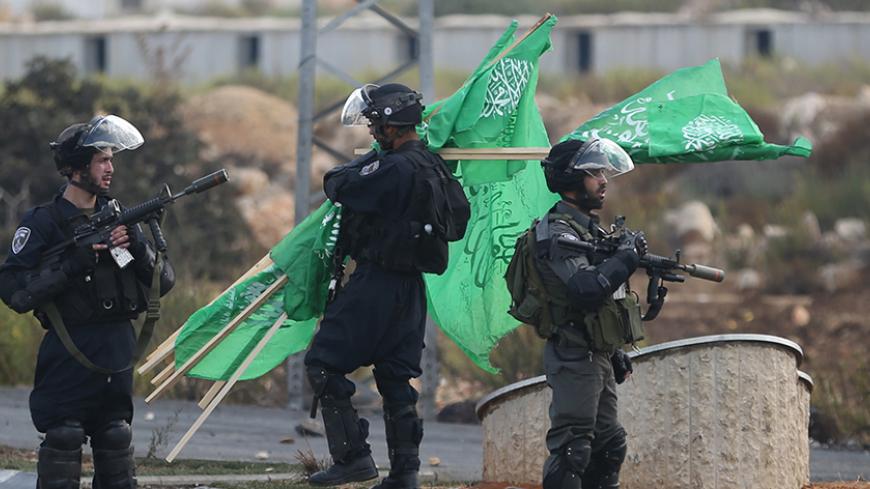 Israeli policemen confiscate Hamas flags during clashes with Palestinians near the Jewish settlement of Beit El, near the West Bank city of Ramallah, Oct. 8, 2015. Hamas' leader in Gaza, Ismail Haniyeh, called on Palestinians to step up their fight against Israel on Oct. 9, describing the recent surge in violence as the beginning of an intifada. - REUTERS/Mohamad Torokman

GAZA CITY, Gaza Strip — A Hamas source said the group might curtail its armed actions temporarily to avoid a crackdown that could stifle a nascent intifada. Hamas is pushing for the intifada in the West Bank and Jerusalem, which it believes could help its members there in light of the Palestinian Authority's security grip on them and the freezing of security coordination with Israel.

Hamas supports a popular intifada and direct individual confrontations, at this stage at least. The group, which believes armed action is a proper approach to resist the Israeli occupation under usual circumstances, thinks such action on its part at this point might weaken the intifada, a well-informed Hamas source told Al-Monitor on condition of anonymity.

“We are looking at everything we have in common with all the factions in order to achieve a real breakthrough for the intifada. We believe that the continuity of the intifada depends on media, moral and financial support. Armed action in the early stages [of the intifada] may increase the pressure on Abu Mazen [President Mahmoud Abbas] to put an end to it,” the source said.

“The Palestinian-Israeli security coordination is under the supervision of US security leaders, who managed to thwart attempts to organize military resistance cells in the West Bank. So the best solution at this stage is to continue with individual acts of resistance in the West Bank and Jerusalem,” he added.

Hamas’ security services in the Gaza Strip on Oct. 9 allowed Palestinian demonstrators access to the border with Israel in the northern and eastern Gaza Strip to avoid any criticism that Gaza is avoiding the direct clashes with Israeli forces.

During a Friday sermon Oct. 9, which was broadcast live on Al Jazeera and Hamas-affiliated television channels, Hamas’ most prominent official in the Gaza Strip called on Palestinians in the West Bank and Jerusalem to keep confronting Israel and announced the start of the Palestinian intifada.

“The intifada is the only way toward liberation after being lost in the negotiations that resulted in confusion and internal conflict," said senior Hamas leader Ismail Haniyeh. "For our dispute is not a power struggle, but rather a difference in programs and methods of liberation."

He added, “Our people are tired of negotiations; they can now make a decision and take initiative. They are going forward with great pride and do not care how many sacrifices are made or how much blood is shed."

During the same sermon, Haniyeh sought to pre-empt criticism and said, “Gaza, in spite of all the conspiracies it is exposed to, will not give up its strategic role, and it stands ready for this fight and the blessed intifada. It will never leave behind the blessed West Bank.”

Haniyeh's media adviser, Taher al-Nono, told Al-Monitor, “The intifada is the choice of the Palestinian people who have been suffering the occupation’s racist practices against Jerusalem and Al-Aqsa Mosque. [Israel] also shut down all political solutions that could restore [the people’s] rights and gave settlers the green light to terrorize the Palestinian people.”

However, another source in Hamas who requested anonymity told Al-Monitor, “After in-depth discussions took place within the movement’s leading institutions, [Hamas] stressed that it is necessary to ignite the intifada and maintain its continuity in all possible means, as well as mobilize various media outlets to promote it.”

The source added, “Some in the movement believe the outbreak of the intifada would allow Hamas to restore its power in the West Bank, since security coordination between the PA and Israel would collapse. Others, however, believe the intifada may achieve the principle that Palestinian rights can only be restored through a popular and military confrontation with the occupation without [going through] negotiations."

Hamas went through similar events in the West Bank before the second Palestinian intifada in 2000. Its members were being arrested and the movement’s activities were limited by the PA’s security services in the Gaza Strip.

Mkhaimar Abusada, a political science professor at Al-Azhar University in Gaza, said Hamas may prefer the intifada in the West Bank and Jerusalem in the belief that the Gaza Strip has become liberated from the direct occupation.

Abusada told Al-Monitor, “The intifada will ease the security pressure that Hamas members in the West Bank have been under for eight years, as the PA and its security services’ power eroded at the internal level, and at some point, security coordination with Israel will collapse.”

Al-Monitor learned from different sources in Palestinian factions that Hamas is holding daily meetings with leaders from key factions in the Gaza Strip to urge them to carry on with the intifada.

One of those sources pointed out that contacts are ongoing between Hamas and PA leaders in Ramallah to push forward “so the intifada would not be aborted and the confrontations between Palestinian youths and the Israeli occupation forces would continue at all front lines.”

The same Hamas source, who is well-informed, stressed, “We seek to bridge the gap between us and the Fatah leadership and unite means used to face the Israeli occupation, since the military action alone would not work without a political power and vice versa.”

The source added, “The third intifada is a golden opportunity to unite efforts to achieve victory against Israel. If approved by [Abbas], the achievement will be accomplished and the Palestinian cause will gain the respect it had lost in the past years, which was obvious in the leaders’ speeches at the UN General Assembly meeting held in [September]. Not one [world] leader had mentioned the Palestinian cause in his speech.”

Hamas’ success in pursuing a popular intifada and its waiving the use of armed action temporarily will depend on the position adopted by Abbas, who is under continuous pressure from the international community to ease the ongoing tension. Meanwhile, Israel’s actions toward Palestinians also will play a significant role as a constructive or a destructive factor in the intifada.