Critics of the nuclear agreement with Iran urge US President Barack Obama to set firm limits on international sanctions relief early on. 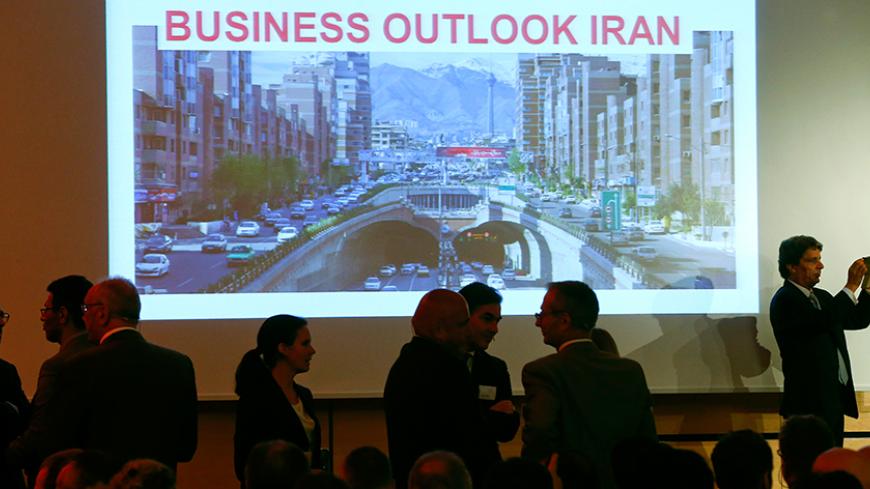 Participants await the start of an event hosted by Swiss government-funded organization Swiss Global Enterprise, on how to pursue opportunities in Iran following the nuclear agreement in June, in Zurich, Aug. 27, 2015. - REUTERS/Arnd Wiegmann

Critics of the nuclear deal with Iran want the Obama administration to quickly set firm limits on sanctions relief to prevent the international coalition that brought Tehran to the table from unraveling.

With the Joint Comprehensive Plan of Action (JCPOA) having gone into effect Oct. 18, skeptics worry that a trickle of European companies entering the Iranian market will soon turn into a flood. They say that could neuter the non-nuclear sanctions that are supposed to stay in place under the deal, while making it harder for Europe and the United States to collaborate on snapping back nuclear sanctions if Iran violates its terms.

The future of the sanctions regime "really depends on how assertive will US authorities be early on in the game, because it will set the precedent and the tone for the Europeans," said Emanuele Ottolenghi, a senior fellow at the hawkish Foundation for the Defense of Democracies who has advised Congress as well as several European foreign ministries on Iranian issues. He told Al-Monitor, "If the Europeans see that there are little consequences and there is little action against them, they’ll push the boundaries, no doubt."

US Congress has similar concerns.

"I strongly believe that the strength and unity of our transatlantic coalition will continue to play a positive role in the long-term success of this deal," Sen. Jeanne Shaheen, D-N.H., the top Democrat on the Senate Foreign Relations panel on European affairs, wrote to the French, British and German ambassadors last month. "The JCPOA contains strong incentives for Iran to meet its nuclear commitments, but a unified response to any Iranian violation is the best way to ensure the long-term success of this agreement."

Under the terms of the deal, both Europe and the United States are set to suspend their nuclear sanctions once Iran has taken the agreed-upon steps to dismantle its nuclear program, which should take six months or so. The United States, however, will indefinitely retain a broad range of sanctions that aim to punish Iran for its support for terrorism, human rights violations and ballistic missile research.

For the most part, European and other countries outside the United States will be allowed to resume foreign trade with Iran on everything from oil and gas to financial services, transportation and related sectors — about 95% of Iran's external economic activity, according to former State Department sanctions official Richard Nephew. The United States, however, will retain the ability to crack down on a number of foreign transactions with Iran, fueling the current debate over how far to turn the screws.

Because the US list of entities sanctioned for non-nuclear activities is longer than Europe's, the Treasury Department has some flexibility in how difficult it wants to make life for European firms that opt to do business with redlined Iranian firms. In addition, Congress is all but certain to try to slap new sanctions on Iran for its support for its terrorist proxies, notably in Syria.

"The administration has asserted that it is committed to even making additional designations under some of the executive orders, as far as terrorism and proliferation," said Kenneth Katzman, a sanctions expert with the Congressional Research Service. He told Al-Monitor, "Some of the entities on the EU list that may be delisted by the European Union will still be listed by the United States, and therefore secondary sanctions would still apply. It's going to make it very difficult to have transactions with those entities."

US government agencies are also expected to play a major role in interpreting the laws that prevent foreign entities from using the US financial system to do business with Iran. With Iran opening up to foreign investment in the coming months and years and the JCPOA allowing foreign banks to transact with Iran using US dollars, potential investors will have to pay close attention to the pending rules.

“What I’ve told clients is, there’s two things they should be waiting for," Erich Ferrari, an attorney who handles transactions with Iran, told Al-Monitor. He said, "No. 1 is wait for further guidance to come out from OFAC [the Treasury Department's Office of Foreign Assets Control] to determine how they’re going to deal with the implementation of US sanctions relief. [And] also be aware of any US person who may be involved either directly or indirectly in transactions for which they would want to re-enter Iran or in activities that may provide back-office support to the company."

President Barack Obama himself has sought to assuage any fears on Capitol Hill that Europe and the United States will have a rift over Iran sanctions.

“I am confident that we can impose consequences for Iranian violations without having to do so alone,” Obama wrote in a Sept. 7 letter to Sen. Ron Wyden, D-Ore. “Our European allies have made clear that they would join us in re-imposing unilateral sanctions and have conveyed to us that they stand ready to re-impose European Union sanctions in a calibrated manner as appropriate in the event Iran violates the JCPOA incrementally, ensuring that we can deter such non-compliance as well.”

Wyden announced his support for the deal a day later.

Critics of the deal aren’t so sure. They see Britain reopening its embassy in Tehran and France sending business delegations and worry that those warming ties could foreshadow a trans-Atlantic clash in the future.

"It's going to be a challenge for the administration to persuade the Europeans that it's appropriate to keep all those sanctions for terrorism and other reasons," said Patrick Clawson, the director of research at the Washington Institute for Near East Policy. He told Al-Monitor, "Certainly the way in which European businesses are acting, and the way European governments are acting about their businesses' involvement in Iran, suggests that they think their companies are going to be able to carry on financial transactions with Iran without a whole lot of impediments. And that's kind of hard to square with a continued application of these secondary sanctions."

If history is any guide, Clawson and others argue, the United States may well end up caving in to European pressure just as what happened in the mid-1990s with the passage of the Iran and Libya Sanctions Act. After European nations rebelled against the US effort to stop them from doing business with who they want, President Bill Clinton and his successors gave them a broad exemption that infuriated Congress.

“Soon after the bill was signed into law, the Europeans complained about it and the Clinton administration gave them a carve-out, which was not called for in the bill at all," said a former aide to former Sen. Al D'Amato, R-N.Y., the bill's author. "They got a carve-out waiver for everything. Right there is your explanation for what can happen.”

Defenders of the deal argue that's why Republicans are deluded if they think they can rip up the deal and hope to get Europe on board with sanctions again. But they also downplay the risks of such a rift happening in the first place if the United States abides by the deal.

“I think other countries are going for the most part to ignore attempts by the United States to twist their arms not to implement the deal if Iran continues to comply with the agreement,” said Daryl Kimball, executive director of the Arms Control Association. He told Al-Monitor, “But at the same time, if Iran violates its commitments, the Europeans are going to be there right alongside us to snap back sanctions and take other necessary actions. They’re the ones who have been taking on the economic sacrifices over the past decade, not the United States.”

As a result, even some critics of the deal are advising Republicans and other foes of the deal in Congress to work in tandem with the Europeans if they have any hope of success.

“If the message is, ‘We’re still fighting the deal,’ then Europeans are going to shrug, because the deal is done," said Ottolenghi. He added, "But if the message is, ‘We’re not fighting the deal, but what we’re doing is to ensure that the business community is diligent about who they’re doing business with’ … then I think you will have a different response because the argument will not be, ‘Don’t do business with Iran,’ the argument will be, ‘Do business with that part of Iran that is not tainted by connections with the proliferation-industrial complex, with terrorism, with the IRGC [Iran Revolutionary Guard Corps], and so on.’”