US seeks to block sanctioned Iranian airline’s flights into Europe

The Obama administration is warning EU allies to shut out Mahan Air or risk US retaliation. 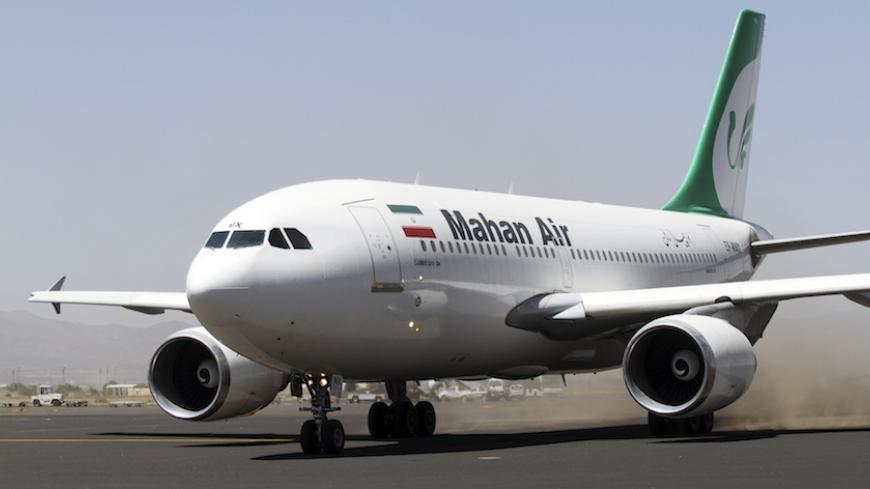 An Airbus A310 of Iranian Mahan Air taxis at Sanaa International Airport following its first flight to Yemen from Iran, March 1, 2015. - REUTERS/Mohamed al-Sayaghi

The Obama administration is warning European countries and companies to shut out a sanctioned Iranian airline or risk US retaliation, Treasury officials told Al-Monitor.

US officials have long said that they retain the ability to sanction entities that do business with Mahan Air because of its alleged ties to the Islamic Revolutionary Guard Corps (IRGC). Those past remarks, however, have mostly focused on the sale of aircraft and parts as well as banking services, not on behind-the-scenes efforts to derail the airline's plans to further expand its flights to Europe and elsewhere around the globe.

"Treasury is engaging closely with stakeholders around the world, including our partners in Europe, regarding our sanctions targeting Iran," a Treasury official told Al-Monitor. "Regarding Mahan Air specifically, we are doing this by working with our partners to prevent Mahan Air from acquiring aircraft and aircraft parts and software, preventing the opening of new routes and working to get existing routes canceled."

The Treasury official made clear that despite the Iran deal, US sanctions officials "retain sanctions on Mahan Air for its support to terrorism and will continue to use this authority to target the airline." The deal, the official said, "does not preclude us from designating any entities that support Mahan Air or facilitate its activities."

A senior Iranian official professed surprise at the move to close the routes.

"I haven't heard anything to that effect," the official told Al-Monitor.

The remarks come as the administration is under growing pressure from Congress to punish foreign companies that flout US non-nuclear sanctions on Iran, notably by doing business with an airline that's been accused of transporting weapons to Bashar al-Assad's forces in Syria as well as Hezbollah. During a contentious hearing on the Iran deal's implementation the morning of Feb. 11, House Foreign Affairs Chairman Ed Royce, R-Calif., ripped into the administration for lifting international arrest warrants on two Mahan Air executives.

"Instead of more actions to ground these planes," Royce said, "the White House agreed to lift an Interpol notice."

Later, Rep. Brad Sherman, D-Calif., demanded to know what the administration was doing to ground "the airline of choice for the [IRGC] and Quds Force to go into Syria and kill people."

John Smith, the acting director of the Office of Foreign Assets Control, replied, "A number of agencies of the US government, including Treasury, State, Commerce and others, have been actively engaged to try to prevent Mahan Air from being able to fly."

Smith only got out the words "We have stopped" before Sherman interrupted him to ask where.

"I don't think I can say in this setting," Smith said, referring to the open nature of the hearing.

Sherman urged the Obama administration to double down on those efforts.

"Given how many cities in Europe and the Middle East that Mahan flies to," he told Al-Monitor after the hearing, "my guess is that our successes have been limited."

Mahan Air, which isn't sanctioned by the European Union, currently operates flights to Milan, Athens, the German cities of Dusseldorf and Munich, Turkey, Russia, Ukraine and several other destinations in the Middle East and Asia. Mahan Air had announced that flights to Copenhagen, Denmark, were to start next month but the route opening was discreetly delayed last month.

The airline had been planning routes to Paris, London and many other cities in the future, according to its website. Treasury Department sanctions expert Adam Szubin traveled to Italy, Germany and the United Kingdom in December to discuss Russian sanctions as well as the Iran deal and its consequences for sanctions relief and enforcement.

Emanuele Ottolenghi, a senior fellow at the hawkish Foundation for Defense of Democracies, has long advocated for the United States to give European airport companies a choice between servicing Mahan Air aircraft or US carriers, which would be prohibited from working with them if they were targeted with secondary sanctions. He helps maintain — and disseminate — an open source list of such companies, which includes Milan's Airport Handling and Germany's AHS.

"If the U.S. Administration initiated legal action to impound aircraft landing at European airports and admonish companies providing ground services to Mahan Air that they might face steep penalties, Mahan Air could soon see its European routes cancelled," Ottolenghi told Al-Monitor via email. "Such a strategy would be very effective especially with companies in Europe that service both Iranian and U.S. airlines. Mahan would have no leverage against the threat of U.S. financial penalties and the potential pullout of U.S. customers."

That approach makes a lot of sense to lawmakers such as Sherman. He didn't foresee US airlines being shut out of any major airports if secondary sanctions are applied against Mahan Air service providers.