Even fatwas don't bring Egyptians out to vote

Religion has become an easily wielded political tool in Egypt, and the country's highest religious institution is now using it to fight low voter turnout in the parliamentary elections. 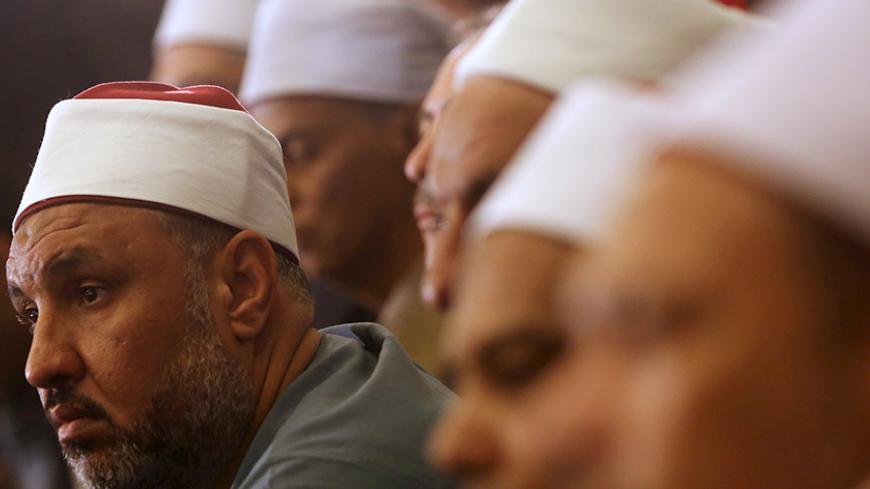 Muslim scholars attend a conference held by the Egyptian Ministry of Awqaf at the headquarters in Cairo, May 25, 2015. - REUTERS/Mohamed Abd El Ghany

CAIRO — The first round of Egyptian parliamentary elections, held Oct. 18-19, opened the floodgates once again for religious and political fatwas. Clerics from Egypt’s official religious institutions were at the forefront of these fatwas, which continue to be strongly condemned by the political Islam movement. The Egyptian Ministry of Awqaf dedicated the Oct. 16 Friday sermon to call upon citizens to vote in the coming elections.

On Oct. 19, Minister of Local Development Ahmed Zaki Bader even insinuated that those who were registered but refrained from voting without a valid excuse could be fined 500 Egyptian pounds ($62) in accordance with the Law on the Exercise of Political Rights. Yet nothing seems to be working, with voter turnout in the first round of elections, held in 14 of the country’s 27 provinces, coming in at less than 27%.

Egypt’s Grand Mufti Shawki Allam issued a statement Oct. 17 calling those who refrain from voting "sinners." Abdullah Nagar, a member of the Islamic Research Academy, issued a fatwa stating, “Not participating in the electoral process is tantamount to abandoning prayer.” His words have gone viral over social media.

In the same vein, an alliance of five Al-Azhar groups — including Al-Azhar Free Sons, the World Federation of Al-Azhar Scientists, the Egyptian Syndicate of Preachers, the Union of Young Imams and Preachers Abroad and Scientists Against the Coup in Europe — issued a fatwa Oct. 15 stressing the sacredness of participating in the upcoming parliamentary elections.

Abdul Hamid al-Atrash, the former head of Al-Azhar’s Fatwa Committee, told Al-Monitor, “Those who wish to issue a fatwa have to first study the doctrines of the four imams, the senior scholars for Sunnis, who are Abu Hanifa, Ibn Milik, al-Shafi’i and Ibn Hanbal. They have to be pious and devout Muslims and not inclined toward fame and public appearances.”

He added that participating in the electoral process is a national duty with religious significance, because the parliamentary elections have a significant role in the stability of the country. Therefore, no one should abstain from voting without an excuse. And if they believe that candidates should not be elected, they can always cast blank votes, but at least they will have participated.

“The fatwa saying that abstaining from voting is like abandoning prayer is too much and involves excessive intimidation, as performing prayer is the second pillar in Islam and cannot be compared to elections. [Prayer] should not be politicized for mundane reasons, as Islam regulates all spheres of life, including politics,” Atrash said.

He added, “The civil and secular forces made a mistake when they called for the separation of religion and state, especially under Muslim Brotherhood rule. Whereas today there have been fatwas to the contrary, which caused confusion among voters as to what should be done now.”

For his part, Nagar told Al-Monitor, “Sharia regulates all aspects of life. The upcoming parliament will achieve stability for the country, and abstaining from voting is likely to lead to serious consequences, disrupting the state.

“Man-made laws differentiate between public and private laws; so do religions. God has rights and worshippers have theirs. For instance, when worshippers abandon prayers, they wrong God. Similarly, abstaining from voting will have adverse consequences on worshippers, who would have sinned as they refrained from testifying that there are some candidates who would serve their country well. Therefore, boycotting elections is a more flagrant [violation] than abandoning prayers in the eyes of God.”

Nagar said, “In my fatwa, I called for participation in the election, not for voting for certain candidates supporting President Abdel Fattah al-Sisi. Meanwhile, the Muslim Brotherhood used fatwas for libel and slander against him.”

“The Brotherhood’s advocates terrorized me intellectually on social networking sites, while they are now raising their voices in the world as they are not allowed to demonstrate. How are they now demanding the very same thing they had been opposing? All I did was speak my mind, but they did not like my opinion.”

Ali Abu Al-Hassan, former head of Al-Azhar's Fatwa Committee, told Al-Monitor, “The main goal of elections is to build a state, which is done through an elected council. However, this is closely linked to the candidates. If they were corrupt, this will not help build a state, and thus boycotting the elections ought to be valid.”

Abu Al-Hassan said that both sides have their own reasoning. While the first camp, the state's religious scholars, see the upcoming parliament as beneficial for the country, the second camp, the opposition scholars, deemed it otherwise and chose to boycott elections. Thus, neither ought to claim that its fatwas truly represent Islam.

He added that the clerics who have strong ties with the state justify its every move by referring to Quranic texts, just as extremist groups do. Religious texts are used to accuse the state of being un-Islamic. Religion has become an easy tool accessible to everyone, without any control. The state puts forth the rules only to be the first to break them, and others only follow suit.

Nafaa also said that the Muslim Brotherhood is not the only party to oppose the current ruling regime — there is also the young people of the January 25 Revolution. They believe that the current ruling elite will lead to autocracy and that Sisi will end up doing what he wants, so there is no need to go to the polls.