Ultra-Orthodox and other Jewish organizations are pushing for an amendment to the Israeli law against proselytizing that they say is currently unenforced. 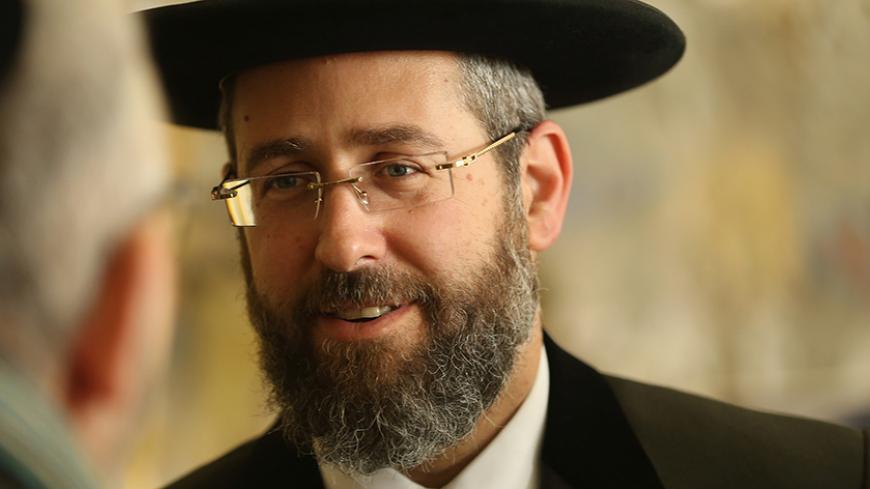 In recent years, the Feast of Tabernacles (Sukkoth) has become a significant religious holiday for evangelical Christians who support Israel. They come to Jerusalem by the thousands from all over the world for a week of celebrations that include study sessions of the Bible and the New Testament. This year, the International Christian Embassy Jerusalem held a convention at an auditorium in Jerusalem attended by thousands of Christian Zionists.

It seems, however, that certain groups in Israel are deeply concerned by the growing phenomenon and even fighting it. According to those opposing it — for the most part, ultra-Orthodox and other religious Jews — it is actually Christian missionary activity aimed at encouraging Jews to convert to Christianity. Recently, in an unusual move, Israel's Chief Rabbis David Lau and Yitzhak Yosef issued an appeal against the convention, describing it as "a spiritual danger" "undermining the Jewish character" of Israel.

The Yad L'Achim organization, which its leaders say has been fighting Christian missionary activity for 50 years, is behind the struggle against the convention in Jerusalem. Yad L'Achim considers it a dangerous and even an illegal attempt to proselytize about Christianity in the Land of Israel. "For years we had a tacit understanding with the International Christian Embassy in Israel, whereby they steered clear of missionary activity, and over the years, they did keep their part of the deal," Rabbi Shmuel Lifschitz, who heads the organization, told Al-Monitor. "However, last Sukkoth, they hosted soldiers and young Jews and openly preached for conversion to Christianity. As far as we are concerned, it was crossing a red line."

Lifschitz said this year, his organization has appealed to Defense Minister Moshe Ya'alon, as well as to various Israel Defense Forces (IDF) officers, asking them to make sure that no IDF soldiers attend the convention in case its agenda includes proselytizing. In view of the protest, the International Christian Embassy in Israel declared that it would not hold any preaching activities at the convention. The Christian Embassy did not respond to Al-Monitor's request for comment on the matter.

Lifschitz said his organization claims that under an official order, the law is not enforced in practice. "The way I see it, there are concerns in Israel that enforcing the law would antagonize the Christian world," Lifschitz said. He suggested that the law should be amended to totally prohibit any preaching or persuasions for religious conversion. So far, all ultra-Orthodox attempts to amend the law to this end have failed.

"Our goal now is to lobby for the amendment of the law, so that no missionary activity of any kind would be allowed, and to push for restricting the missionaries' activities," Lifschitz told Al-Monitor. He added, "As to the [Christian] missionary activity, we have partners across the entire political spectrum, and it is not really an exclusive interest of religious [Jews] alone. At the time, even [late] Tommy Lapid, chairman of the [secular] Shinui Party, tried to lead, along with [ultra-Orthodox YaHadut HaTorah party] Knesset member Moshe Gafni, a campaign for a revised countermissionary law."

Whether or not the International Christian Embassy in Israel is itself engaged in missionary activity, the present struggle reflects long-standing tensions in Israel over extensive Christian missionary activity in the Holy Land. Talking with Al-Monitor, Lifschitz described the daily activity of dozens of missionary communities throughout the country. "These communities are scattered from north to south and actively engage in missionary work," he explained. "They distribute materials by mail, approach people on the street and maintain an extensive Internet presence. What is even more serious, in my eyes, is the deceptive tactics these activists are employing. They offer passersby Psalm books and [Jewish traditional] prayer shawls, inside which proselytizing materials are hidden. The only way to combat them is by exposing their real activities. We are promoting legislation that would force the due diligence marking of those materials as Christian."

Moti Vaknin, a missionary and prominent activist among the so-called Messianic Jews, runs Radio Agape, an Internet radio station. It was no easy thing to locate Vaknin, as his home address and phone number are both close-kept secrets. His acquaintances flatly refused to disclose the information, explaining that Vaknin is a constant target of threats and harassment by the activists of Lev L'Achim, a Jewish organization that campaigns against missionary activity.

Vaknin, who attended the Christian convention in Jerusalem, did not deny that the event's participants seek to spread the Gospel. "I believe that [the organizers] have a purpose: to win over believers to their faith," Vaknin told Al-Monitor. "Spreading the Gospel is a cause that [we] all share, more or less actively."

Vaknin is actively engaged in the missionary operations of the Messianic Jews and proudly stands behind this activity. "We live in a democratic country," he argued. "I am not giving anything in return, and I am not breaking the law. In the event our activities are banned under the law, then Jewish missionary activities should likewise be banned. All members of the Messianic Jews community have recently been sent a sermonizing leaflet from the Yad L'Achim organization. Honestly, I cannot see why it should be treated differently from the materials we distribute through the mail."

Yad L'Achim is convinced that the only way to restrict the activities of the missionaries in Israel is through legislation. "Now that a right-wing government with religious sentiments is at the helm in Israel, I am optimistic," said Lifschitz. "We are acting on the legal level to block some of the online activities, in particular their advertisements preceding video clips for children on YouTube. However, our main task is still to lead to a significant and unequivocal amendment to the legislation."

The conflict between the Christian missionary organizations and those opposing their activities has played out against the backdrop of low-key interreligious tensions between extreme religious Jews and Christians. Yet in recent years, recurrent complaints about harassment of priests in Jerusalem have appeared in the media. In June, extreme right-wing activists set fire to the Church of the Multiplication, and in August, Benzi Gopstein, the chairman of the Lehava organization, which calls for "preventing assimilation in the Holy Land," allegedly declared his support for the torching of churches.

In Yad L'Achim, they stress that they have no problem with Christianity as such, but rather with missionary activity. To be sure, there is no significant conflict in Israel between Judaism and Christianity. It is the missionary activity that stirs discontent among the Jewish population and provokes far-reaching initiatives of various Jewish organizations against it.