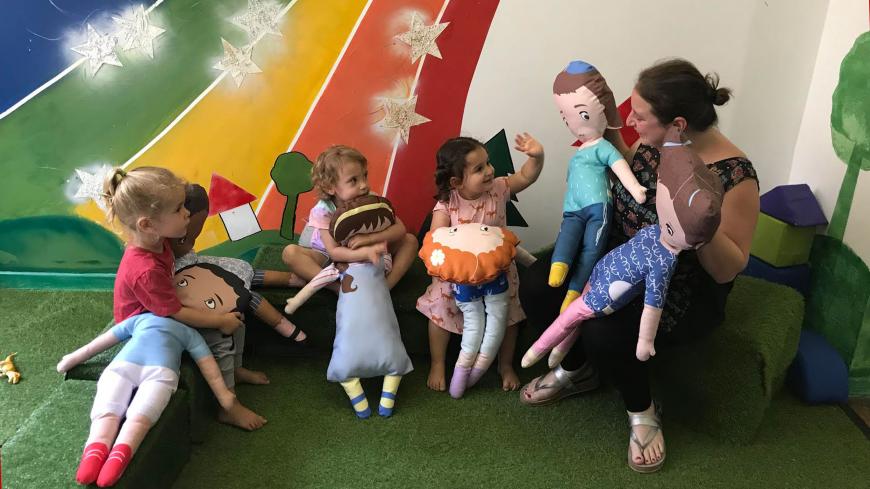 Kids learn about diversity with the help of puppets from Games 4 the Future, Tel Aviv, Israel, June 3, 2018 - Instagram/games.4.the.future

Israel’s many ethnic and religious divisions are a mixed blessing: They create a rich cultural tapestry as well as seeds of discord. One small Israeli organization aims to teach youngsters diversity and tolerance through dolls.

Games 4 the Future, an educational nonprofit organization launched by jurist Gil Pacht in 2016, aims to foster familiarity, attentiveness, openness and positive attitudes toward the country’s different cultures among Israeli kindergartners. Their tools are a collection of dolls known as persona dolls, which have been used since the 1950s around the world for teaching young children.

Pacht and his team won the first prize in a 2015 hackathon, earning a $15,000 grant from the Atidim Alumni Association to launch the project. They founded their organization a year later. Since then, the core team has consulted with social scientists, psychologists and educators to develop their product. In April, it enlisted the help of a multiethnic cast of Israeli celebrities and journalists, such as news presenter Lucy Aharish, to promote a crowdfunding campaign to raise funds for the initiative and bring the dolls to schools around the country as educational tools.

The dolls represent the patchwork of the various Jewish and non-Jewish communities in Israel. Of Israel’s 8.8 million inhabitants, around 21% are Palestinian Arabs, 11% are immigrants or children of immigrants from the former Soviet Union, approximately 12% are ultra-Orthodox Jews and 2% are of Ethiopian descent, according to Israel’s Central Bureau of Statistics. The remainder are of Middle Eastern and North African and European Jewish descent, the latter having historically formed the bulk of the country’s ruling elite.

"The Ancestral Sin," a documentary aired on national TV this year, related how the country’s European founders marginalized Jews of Middle Eastern descent, reopening internal ethnic wounds. Prime Minister Benjamin Netanyahu’s remark on election day in 2015 that “Arab voters are heading to the polling stations in droves” reignited resentment among Israel’s Palestinian minority. That same year, a video of a police officer beating a soldier of Ethiopian descent prompted mass protests by thousands of Ethiopians and their supporters.

In August 2015, President Reuven Rivlin warned of a “new Israeli order” and the risk of the country fracturing into four “tribes”: secular, ultra-Orthodox, Arab and nationalist religious. It was around that time when Pacht conceived of an initiative to promote understanding within Israeli society.

The dolls have outwardly different appearances and are given personas and stories that make their characters relatable to the children. This method of education was developed in the United States in the 1950s and has been used around the world in places to heal racial or religious division, such as Ireland and South Africa.

Delores Athiemulam, director of Persona Doll Training, a South African organization that has been teaching educators how to use persona dolls for 15 years, called them “a powerful tool” for addressing problems of sexism, bullying and racism in post-apartheid South Africa.

“Each doll has a story that the children can identify with,” she told Al-Monitor in a telephone interview in May. “It’s really a tool or a methodology that use the dolls in order to get children from a young age to accept diversity and also to make them aware of their own dignity and their own differences.”

Athiemulam said her program has proven a great success in South Africa. “The children are showing more tolerance and more understanding, because they had that interaction and they went through that program with the dolls,” she noted.

In Israel, the Games 4 the Future’s dolls come in seven different personas: Russian, Ethiopian, ultra-Orthodox, Arab, Mizrahi, Ashkenazi and skullcap-wearing nationalist religious. The Arab doll, Nur, for example, is meant to dispel stereotypes about women and Arabs alike. She likes “watching science television shows and sometimes conducts experiments at home,” the company’s promotional video explains. The dolls themselves are fabricated by an organization employing people with disabilities.

“There is very significant segregation in Israel,” Pacht told Al-Monitor, pointing out that much of Israeli society lives in “tribes,” exactly as Rivlin described.

In an ideal world, he said, kindergartens would be more integrated, and children of all backgrounds would have greater exposure to different communities from a young age. “Children do not have the opportunity to meet other children from different backgrounds in the educational frameworks they are in,” he added.

Shlomi Hatuka, a Mizrahi social activist who has pushed for greater diversity in Israeli advertisements, told Al-Monitor, “Everything has to do with the fact that there is no representation of black or dark-skinned people in the Israeli public space.” Exposing young children of all backgrounds to the country’s broad spectrum of inhabitants would only serve to encourage understanding and combat racism, he argued.

Pacht hopes that by exposing young children to the differences and similarities between people through the dolls, he could help eliminate these divisions based on religion and race in a future generation of Israelis.

“I want to create a positive first picture for children before they receive a negative impression,” Pacht said.

So far, Games 4 the Future's funding campaign has raised only 21,330 Israeli shekels (roughly $6,000), a mere 14% of the target of 150,000 shekels ($42,000). But Pacht is undeterred. He said his organization has received positive feedback from the Ministry of Education and is in negotiations with government authorities and municipalities in central Israel to incorporate the dolls in kindergartens. Eventually, he hopes to incorporate the dolls into a digital education product.

“Our desire is to get to all the kindergartens and homes in Israel,” Pacht said.