US veterans fight over Iran deal

Congress is getting mixed messages from Americans who’ve battled Tehran. 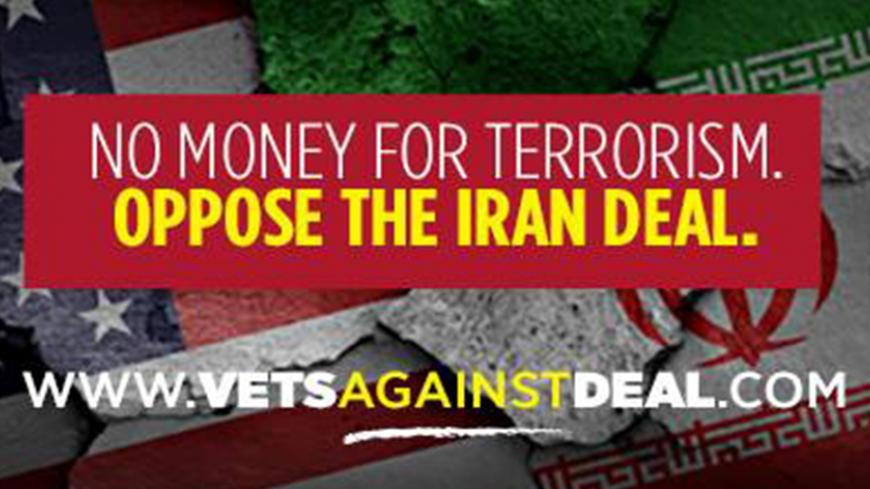 American veterans are increasingly joining in the Iran deal fight as the debate turns from its technical merits to concerns about empowering a US foe.

War fighters’ mixed feelings about the nuclear agreement will be on full display today when two groups claiming the veterans’ mantle hold dueling rallies in New York and Virginia. Both hope to capitalize on the good name of an institution that consistently polls as one of the most respected in the country as Congress prepares to vote on the deal.

“Our veterans are specifically veterans that have ties to this fight. [They’ve] been dealing with the regime since 1979,” said Michael Pregent, executive director of Veterans Against the Deal. “We have a loud, reputable voice and know what we’re talking about.”

The group will hold a rally along with the Stop Iran Coalition today in front of the New York City offices of Democratic Sen. Kirsten Gillibrand, who has come out in favor of the deal. The rally will include Sen. Lindsey Graham, R-S.C., a long-shot presidential candidate and Air Force reserve colonel, as well as hawkish former Sen. Joseph Lieberman, I-Conn.

Pro-deal veterans, meanwhile, will rally in Richmond, Va., along with Sen. Tim Kaine, D-Va. The Truman National Security Project, a pro-Democrat think tank that has been airing a pro-deal TV ad in Virginia, organized the rally.

“I know how dangerous Iran is,” says the video featuring three Iraq war veterans. “They trained and supplied veterans who killed my brothers and sisters in Iraq. We cannot let them get a nuclear weapon. The tough deal on Congress’ desk blocks Iran’s path to the bomb.”

The rallies come a little more than two weeks before Congress is set to vote up or down on the deal. Opponents of the deal have failed to win much traction during the five-week summer recess, and Congress is seen as very unlikely to be able to overcome a presidential veto.

Veterans have played an outsize role throughout the debate.

Lawmakers have also touted their military bona fides to explain their vote.

“Nine years ago, Iran was trying to kill me, and to kill my soldiers,” Sen. Tom Cotton, R-Ark., recently told CNN about his experience as a soldier in Iraq and Afghanistan. “We were lucky, but over 500 American soldiers were not. We shouldn’t be making a nuclear arms agreement with that kind of outlaw regime.”

“As a combat veteran who has seen fellow Americans killed in Iraq by the weapons and influence of the Iranian regime, I understand firsthand the threat Iran poses to America and our allies,” he said in a statement explaining his support for the deal. “The United States and the international community must prevent Iran from obtaining a nuclear weapon.”

Pregent, a former intelligence adviser to Gen. David Petraeus, launched his organization earlier this month after President Barack Obama compared opponents of the deal to supporters of the unpopular Iraq War. Pregent said his organization has about 30 members, including a 1979 US Embassy hostage, a Marine commander during the 1983 Beirut barracks bombing and a retired Navy SEAL whose brother was killed in the 1985 hijacking of TWA flight 847 by Hezbollah.

Pregent told Al-Monitor his group’s biggest concerns lie with non-nuclear aspects of the deal, notably the lifting of UN sanctions on Iranian individuals, entities and ships.

The Obama administration says the vast majority of US sanctions — including the ones punishing Iran for terrorism and human rights violations — are staying in place. The administration argues that the UN sanctions that are being lifted over time were originally put in place as punishment for Iran’s alleged nuclear cheating, and that promising to remove them is what got Iran to the negotiating table in the first place.

“[A] comprehensive solution would involve a reciprocal, step-by-step process, and would produce the comprehensive lifting of all UN Security Council sanctions,” reads the preliminary agreement reached in 2013.

Pregent said his group hasn’t given up on Congress killing the deal, and that even Democrats who support the deal — such as Gillibrand — may still be in play.

“We believe that we can get Democrats — even those that have come out for it, because the vote hasn’t taken place yet — we believe we can give them a principled ‘no’ vote by simply giving them a fact-based reason not to support this thing,” he said. “No senator who has come out in support of this deal has heard our argument yet.”

He said the brother of the murdered TWA hostage talked to the undecided top Democrat of the Senate Foreign Relations Committee, Sen. Ben Cardin, D-Md., for 25 minutes on Aug. 27. The group also has meetings lined up with the undecided Sens. Joe Manchin, D-W.Va., and Michael Bennet, D-Col., when Congress returns from recess next week.

Even if Congress doesn’t vote down the deal, Pregent said he’s hopeful lawmakers will use the occasion to pass resolutions calling for a US military option, bunker-busting bombs for Israel or new non-nuclear sanctions. The Obama administration has launched a lobbying blitz to prevent opponents from getting the 60 votes they need to take up the Iran deal resolution, in part to avoid just such side votes.

“We know that Iran considers that there can be no changes made to this deal — any amendments, any additional sanctions,” he said. “Our goal is to get Iran to kill this deal.”