Amid the withholding of the details of the Emirati death toll in Yemen, African soldiers are set to step up their role in Operation Restoring Hope. 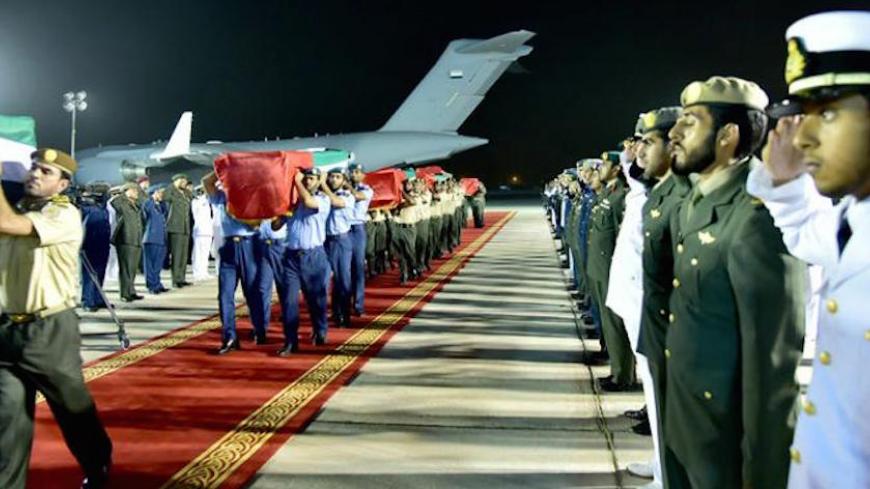 When three Emirati soldiers were killed in the Gulf Cooperation Council-led Operation Restoring Hope in Yemen last month, their bodies were flown home with great fanfare and their names were proudly announced in local media.

Yet, over a week after a Houthi missile strike east of the Yemeni capital claimed the lives of 60 GCC soldiers, including 45 members of the Emirati military — the most deadly blow to the UAE armed forces in its history — details of the latest deaths remain murky.

It was announced that squares, memorials, a mosque, postage stamps and even a museum would be dedicated to the “martyrs,” with plans for this museum to house an archive that would “document the records of each soldier, including their biography.” Yet, Emirati authorities are simultaneously cracking down on the sharing of a list of the purported names of some deceased soldiers on social media.

The state-owned The National has called this list “false,” and quoted the Abu Dhabi attorney general as saying that anyone who starts a rumor or spreads false information, or any information that aims to “weaken the moral spirit of the people,” will be prosecuted. It has also reported that the public prosecution office in Abu Dhabi has ordered the arrest of a person who published the above-mentioned list.

Al-Monitor has reviewed the list, which features the purported pictures and names of 23 of the 45 slain soldiers representing the UAE. Through cross-referencing with open source data such as The National, the official WAM news agency and social media, Al-Monitor can confirm reports of the burials of 20 of the 23 troops.

Furthermore, through analysis of Arabic- and English-language open source data, Al-Monitor has identified another 12 of the 45 soldiers based on reports of their burials. However, the picture appears murkier when the details of burials reported in the media, which amounts to 32 by Al-Monitor’s own count, are reviewed more closely. Timings and locations of burials carried by the state-owned The National detail 19 burials, in addition to an unspecified number in Ras Al Khaimah. Through analysis of open source data, including pictures, Al-Monitor can report that 12 soldiers were buried in Ras Al Khaimah. Based on The National's tally, this would bring the number of buried troops to 33.

In sum, of the 45 slain UAE soldiers, Al-Monitor has only been able to gather the reported names of 35 troops and can confirm reports of the burials of 32 of these identified troops. It thus remains unclear who the remaining killed soldiers are and where they have been buried.

The UAE introduced conscription in 2014, with two years of national service for men ages 18-30, reduced to nine months for those completing secondary school, and voluntary nine-month service for women. However, the Emirati army has not always been Emirati. In the 1980s, the UAE was the only country in the world that "relied almost exclusively on mercenaries." Then, "its soldiers were recruited from foreigners — especially Omanis and Yemenis — and officers were obtained from Britain, Pakistan and Jordan." This tradition appears to have been continued in some aspects. Of note, based on their surnames, several of the confirmed recent burials were of men with apparent South Asian ancestry.

Beyond relying on other Arab, South Asian and Western troops for its security, the UAE has in recent years also gone as far as South America and South Africa to recruit forces, according to media reports.

In 2011, The New York Times reported that the crown prince of Abu Dhabi had awarded a contract to the billionaire founder of the infamous Blackwater Worldwide (now known as Academi) to assemble an 800-member battalion primarily consisting of Colombians and South Africans, “intended to conduct special operations missions inside and outside the country, and put down internal revolts.” Quoting former employees, the paper further reported that “Emirati officials talked of using them for a possible maritime and air assault to reclaim a chain of islands in the Persian Gulf that are the subject of a dispute between Iran and the UAE.” One year later, in 2012, there were reports that 842 Colombians had indeed been hired and that the UAE sought a total of 3,000 Colombian troops. Of note, the South Americans were reportedly no longer brought in through Blackwater's founder, but had contracts directly “with the UAE government.”

However, one well-placed Gulf-based security analyst told Al-Monitor, “I doubt Colombians will be in Yemen,” adding that “most of the guys” on the ground were "Emirati." He said the matter of the identities of the killed UAE troops is “a massive hot potato,” and, “two problems: If [the fatalities] are non-Emiratis, it looks bad. If disproportionately non-Emirati," there are big issues involving those soldiers' families. Following the Sept. 4 attack that claimed 60 GCC fatalities, the Saudi defense minister issued a directive to treat “martyred” Emirati and Bahraini soldiers as Saudis, “materially and morally.” GCC countries, and Bahrain in particular, have a distinct history of importing Pakistani security personnel. Indeed, Pakistan's refusal to comply with a Saudi request for ground troops was met with heavy criticism by both Riyadh and Abu Dhabi.

But rather than Asians and South Americans operating in Yemen, there have been reports of African troops fighting alongside GCC forces.

In May, the West African nation of Senegal announced that it would send 2,100 troops to Saudi Arabia to join the “Arab” operation in Yemen. Moreover, in recent days, there have been reports of Sudan — long seen as an Iranian ally but yet swayed to join the Yemen operation — now sending 6,000 soldiers. Of note, the Sudanese central bank has confirmed receipt of $1 billion from Saudi Arabia, with the Finance Ministry saying in April that another $1 billion will be deposited from Qatar as well. Separately, Egypt is also reportedly set to send 800 soldiers, while Qatar is sending 1,000 troops.

However, it appears that the reported “African soldiers” in Yemen may neither be Senegalese nor Sudanese. Instead, they may come from Yemen’s war-torn neighbor, Somalia.

In April, Somali Foreign Minister Abdisalan Omar Hadliye announced that his country would allow the GCC-led forces to use his country’s air, land and sea for operations in Yemen. Two months later, in early June, the Emirati foreign minister paid a rare visit to Somalia, where he met with the Somali president and other senior officials. Days afterward, military aid consisting of “armored vehicles, Toyota Land Cruiser-type vehicles and other equipment such as tank trailers” arrived from the UAE.

In early September, only days before the Houthi attack that claimed the lives of 45 UAE soldiers, an unnamed Somali diplomat reportedly accused Somali President Hassan Mahamoud of “allowing the UAE to train the country’s soldiers to go to war in Yemen, instead of fighting al-Shabab.” The unnamed diplomat alleged that while African Union troops were battling Somali insurgents, “Somali soldiers will be fighting in Yemen, and the whole world has to know.” The diplomat further charged that there could be more than 500 Somali troops receiving training to fight alongside Emirati forces, and that the Somali president “is doing this in order to get funding from UAE to defend a motion against him currently in parliament.”

Separately, on Sept. 9, another report quoted Dahabo Abdi Farah, the chairman of the Somali refugee community in the Yemeni capital, Sanaa, as “confirming the presence of the [United Arab] Emirates’ trained Somalis marching with the Arab forces.” Yemen’s Somali refugee community, which has fled war in their homeland, has been caught in the crossfire between rival Yemeni factions and now GCC-led airstrikes. Indeed, Abdi Farah is quoted as saying, “We are so scared because of these Somali forces. Their presence could pave way for the discriminate attack on the Somalis here [in Sanaa].”

Regardless of the veracity of the UAE’s Somali connection in Yemen, it appears that the GCC-led Operation Restoring Hope is set to become increasingly African.