Turkey is a major transit country used by the Islamic State for trafficking looted antiquities, but authorities have not been forthcoming about their seizures. 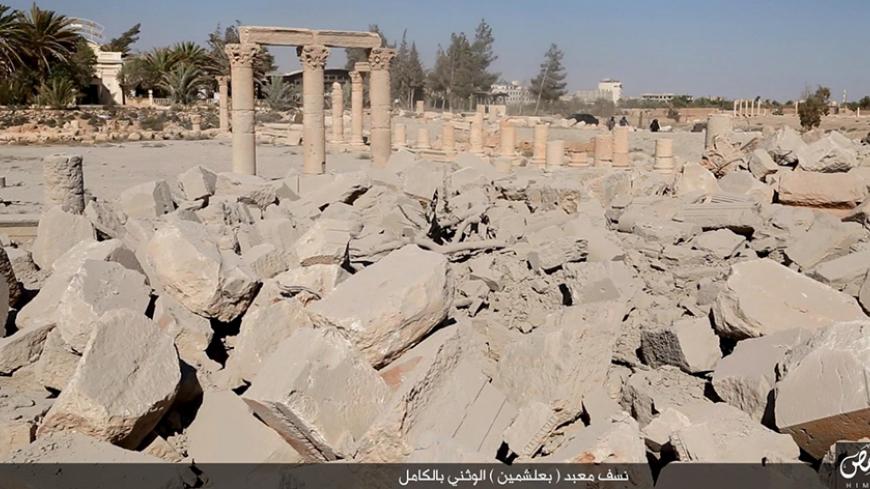 An image distributed by Islamic State militants on social media on Aug. 25, 2015, purports to show the destruction of a Roman-era temple in the ancient Syrian city of Palmyra. - REUTERS

As I sat down to have a drink in Istanbul's Grand Bazaar, a tall man in his early 20s came in. He approached a nearby table, and in broken Arabic, introduced himself as Ahmad to the head of the family seated there. He then asked if they might be interested in seeing some of Syria's ancient history. The conversation ended promptly, as the family left the coffee shop. Ahmad then approached me, saying, “Americans are the best customers for art, would you like to look at some photos?” I asked where the antiquities were from and where they were being stored. He said he did not know. He would take my phone number, and his friends could help me.

Ahmad, an ethnic Kurd from Iran, said that this was the only type of job he could find. A credible phone number would earn him $200. When I asked if he was afraid that I might report him, he replied, “I am undocumented.” Then, pointing to his head, he continued, “I am also not well up here, and no one will bother questioning me. All I have are photos. Plus, I am not selling drugs. If [the objects] are not sold, the Islamic State [IS] will destroy them.” Rattled by my questions, Ahmad left in a jiffy.

As the Syrian civil war drags on, IS and other parties to the conflict are looking for ways to increase their cash flow. With the ongoing bombing by the US-led coalition, revenue from oil sales is declining. Kidnapping, taxation and extortion provide only limited income unless IS can sustain its territorial expansion. The sale of looted antiquities has therefore became lucrative. Indeed, expert testimony before the US Congress suggests that trade in illicit antiquities is the second-largest source of income for IS. Syria’s cultural heritage has become “blood antiquities,” used to fund violence against the Syrian people.

Professor Andrew Terrill of the US Army War College has been studying IS' funding. He told Al-Monitor, “In many wars, including the Syrian civil war, cultural sites are destroyed as part of the collateral damage of war or because one or both sides use cultural sites for military purposes. IS deliberately authorizes the destruction of archaeological sites to gain loot that can be sold to the black market of antiquities collectors. The head of UNESCO states that this is occurring on an industrial scale.”

The process has been well documented. Once a looter gains possession of valuable items, he gives them to a smuggler, who, working through cross-border mafia networks and bribery, travels with the goods to transit countries to hand them over to a dealer. Many Syrian antiquities have reportedly ended up in the West. Despite harsh laws designed to curtail the demand side of the antiquities trade, satellite imagery of looted historic sites point to the difficulty of safeguarding moveable art. Once an item has been laundered into the world antiquities market, it is almost impossible to trace it back to its origin, unless it is a well-documented object.

In antiquities smuggling, as with any organized transnational criminal activity, it is a challenge to pinpoint the precise role that different actors play. Since acquiring looted antiquities is a white-collar crime necessitating some education, at least in art history, a few journalists and government officials in Turkey have been adamant in telling Al-Monitor that the “antiquities trade is not funding IS.” That said, the precious spoils found during US commando raids against senior IS officials prove that their cultural involvement extends well beyond making slick videos.

As Terrill explained, “IS has established a Ministry of Antiquities, which perversely is in charge of organizing the looting of archaeological sites in Iraq and Syria to find artifacts that can be sold on the black market. IS often partners with professional looters and smugglers so long as these gangs pay IS a hefty tax for what they find and smuggle. The easiest types of objects to smuggle are cylinder seals, cuneiform tablets, coins, glassware, jewelry and small decorative items. These things are also small and easy to smuggle. Sometimes they saw the heads off of statues because they are easy to smuggle and still quite valuable.”

Turkey, with its long and porous border and intense refugee traffic, is an ideal transit country for looted antiquities and other smuggled goods. Turkish authorities have reportedly confiscated hundreds of smuggled objects, particularly in cities close to the border.

Hediye Levent has been reporting from Syria since 2008 and during that time interviewed Maamoun Abdulkarim of the Directorate General of Antiquities of Syria. Levent shared Abdulkarim’s burning question: “Why would the Turkish government not reveal the list of Syrian antiquities it has captured?” Levent told Al-Monitor, “This lack of willingness to disclose the items indicates that the Turkish political mindset influences decisions on Syrian cultural heritage. It also signals to the world that Turkey either does not take the illicit antiquities trade seriously or fails to keep tabs on the smuggled items it has found.” The Syrian government has said that it does not expect Turkey to return the objects to Syria at the moment, but it would like to know which ones are in the possession of the Turkish government.

Arzum Karasu, a journalist preparing a documentary on the issue, told Al-Monitor, “Although there are quite a few unverified reports that several pieces of Syrian antiquities have been sold on the black market, when experts investigated, they discovered that most of them were replicas.” Terrill and other scholars agree that the most precious pieces are kept off the market by dealers and are not expected to resurface for a decade. Most dealers see these purchases as long-term investments.

Eyup Sabri Tinas, an attorney from the border city of Urfa, told Al-Monitor, “Smuggling cannot be completely prevented, but the reason it is so pervasive in Turkey is that those who carry out these activities have political connections as well as arrangements with the authorities in charge of monitoring them. Not everyone is corrupt of course, but there are hard-to-break, deep-rooted networks. For instance, the same drugs confiscated by one agency in Diyarbakir are seized again a couple of months later by the same agency’s Istanbul branch. They were supposed to have been destroyed, but they somehow made their way back onto the black market. The Trafficking and Organized Crime Bureau also monitors illicit antiquities, but relevant laws are not always enforced.”

Without proper documentation of the Syrian antiquities smuggled into Turkey, even experts are having a difficult time trying to figure out what the Turkish government might actually have in its hands. Thousands of pieces have been featured in the news, but no one can say for sure which ones are original, which have been seized multiple times or which have already been smuggled out of the country.

One observer in the Grand Bazaar told Al-Monitor, “Everyone looks at Turkey as the transit country, but what goes unrecognized is the power of the Internet. Today the sellers find buyers all around the world, from the Gulf region to China and India. It is a global network. They finalize the purchase in Turkey. It is much easier to travel east with antiquities than west from Turkey.”

Turkey’s role as a transit country in the illicit antiquities trade is changing as buyers become diversified and transnational criminal networks expand their reach. The Turkish government’s lack of transparency makes the situation even worse.