Erdogan continues to stir the pot in Turkey

Erdogan’s suggestion that if the AKP had gotten 400 deputies in the June elections, then the turmoil and violence in the country today would have been avoided, causes outrage and increases tensions. 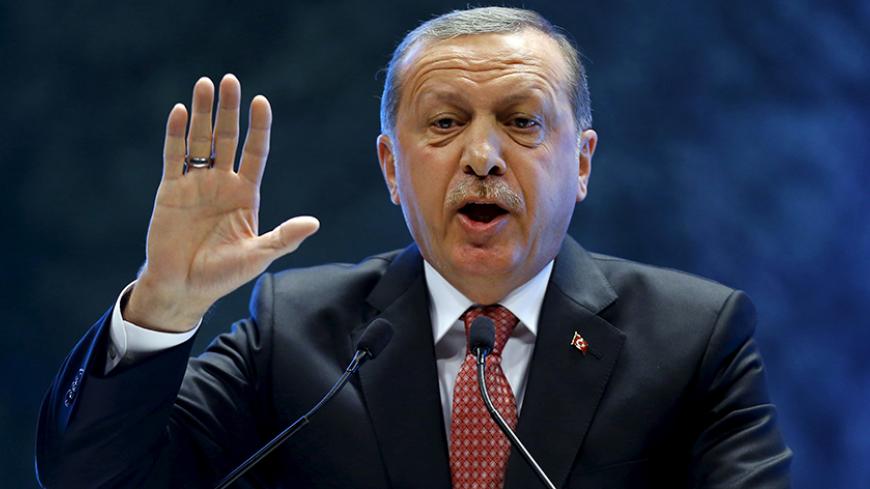 President Recep Tayyip Erdogan is continuing to make his less-than-democratic ambitions clear, and in doing so increasing social tensions in a Turkey already torn asunder along ethnic and ideological lines, with the animosity between Turks and Kurds, and Islamists and secularists, increasing daily.

The rekindled war with the outlawed Kurdistan Workers Party (PKK), which broke out shortly after the Justice and Development Party (AKP) lost its parliamentary majority in the June 7 general elections, and the daily killing of soldiers and policemen by the PKK are pouring fuel on a potentially explosive brew that promises little other than political chaos for the country.

Opposition politicians and analysts are united in their belief that Erdogan is trying to manipulate rising social tensions resulting from daily attacks by the PKK to the AKP’s benefit, in the hope that the electorate will be scared into returning the party to power on its own Nov. 1 for the sake of stability in the country. That is when early elections are due to be held after the AKP’s failure to form a coalition government with any of the opposition parties in parliament following the June elections.

Erdogan’s remarks show he has little time to spare for the political correctness required of him as a president. Constitutionally, the president, as the head of state, has to remain above party politics. Erdogan refused to do so in the lead-up to the June elections and campaigned actively for the AKP, calling on the electorate to return the party to power with 400 deputies so that it can write a new constitution for what he refers to as “New Turkey.”

Erdogan and his supporters have made no secret that the priority project for that Turkey will be to change the current parliamentary system into an executive presidential one where the president, or rather the “leader,” will be penned in with as few constitutional restrictions as possible. Erdogan continues to display few qualms about openly reflecting his desire to become Turkey’s supreme leader and is relying on the AKP, which he led until being elected president in August 2014, for this. He does not appear perturbed that his interference in the political domain is agitating an already tense country.

During a joint interview the night of Sept. 6 with ATV and A Haber — both pro-government channels that act as his mouthpieces — Erdogan said that if the electorate had given a certain party the required 400 deputies, the troubles Turkey is experiencing today would not have come about. He was speaking shortly after news broke of the latest PKK attack near the village of Daglica, in the southeastern province of Hakkari, which killed 16 soldiers, the highest death toll in a single day since the PKK unleashed its new spate of violence in July.

“If a party had managed to secure 400 deputies or a number that could change the constitution, the situation today would have been very different.” Erdogan said. “To start with, this would have been very good in terms of taking a step toward the New Turkey,” he went on to say.

Erdogan did not mention the AKP by name. He also referred to the fact that if the AKP and the main opposition Republican People's Party (CHP) had formed a coalition after June, they would have had the required number in parliament to fashion a new constitution. His remarks were considered insincere by many who pointed to what he had said prior to the June 7 elections, when he made it clear he wanted the AKP get 400 deputies so that it could change the constitution and make him the leader of the country.

His reference to the “New Turkey” was also taken as further evidence of his insincerity, given that the CHP, and other opposition parties, have totally rejected his vision for Turkey’s future, which they argue would be less democratic and less pluralistic and more authoritarian and Islamist and would be led by a single leader, namely Erdogan himself.

Erdogan’s critics also argued that his remarks, during his interview, also provided more proof of his effort to influence the political environment prior to the November elections to the AKP’s benefit. Erdogan also caused outrage given that he was speaking as news of the deadly Daglica attack by the PKK was coming in.

Even if we assume that he did not mean it in that way, his remarks were inevitably taken by many as a barely shrouded suggestion that if the AKP had secured 400 deputies in June, these deaths would not have happened. The highly charged political atmosphere in Turkey was revealed on the very night of Erdogan’s interview when the daily Hurriyet, Turkey’s largest selling paper, used the headline “Statement from President Erdogan on Daglica: ‘If 400 deputies had been elected these things would not have happened’” on its Twitter account and its Internet page.

A group of around 200 Erdogan supporters, led by a newly elected AKP deputy known to be a party firebrand, attacked the paper’s headquarters in Istanbul with sticks and stones, while chanting pro-Erdogan slogans, and tried unsuccessfully to enter the paper's premises with the clear intention of wreaking havoc once inside.

Abdurrahim Boynukalin, the deputy involved — who also heads the youth wing of the party and is reportedly a friend of Erdogan’s son Bilal — was caught on video egging his followers on while pouring invective on Hurriyet and Erdogan’s detractors and threatening them. “All of this is happening because the president could not become a leader. This is what we say to that. Whatever the results of the elections on Nov. 1, we will make [him] the leader,” he said, adding that after Erdogan becomes leader, all of his detractors “will clear off and disappear.”

This attack on Hurriyet, which was widely condemned in Turkey and abroad, but got muted criticism from AKP circles, comes on the heels of a raid on the media organs of the Akin Ipek Group, which is close to the US-based preacher Fethullah Gulen, Erdogan’s onetime ally but current archenemy. It also comes at a time of increased government pressures on journalists critical of Erdogan. It did not take long for a prosecutor in Istanbul to press charges against Hurriyet for “attempting to influence perceptions against the president by putting words into his mouth.”

Regardless of the efforts of Erdogan and his supporters, though, it appears increasingly likely that the wind they are fanning will return to them as a whirlwind. Turks who are watching events spin out of control are wondering how Erdogan will be able to control the “jinns” (the not so friendly genies) he is accused of having coaxed out of the bag, even if the AKP should regain its parliamentary majority in November.

Anger against Erdogan has also started to manifest itself during funerals of soldiers and policemen killed by the PKK. The fact that distraught family members who express their anger are taken into custody for questioning is not helping Erdogan’s cause either. With the economy showing signs of going into a tailspin, the price of trying to keep the AKP in power and Erdogan at the helm is growing for Turkey.

Serkan Demirtas, a prominent columnist for the daily Radikal and the English-language Hurriyet Daily News, says Turkey is heading for the most chaotic elections in its history Nov. 1. Asked by Al-Monitor for his views on Erdogan’s latest remarks and his expectations for the outcome of the elections in November, Demirtas said Erdogan was currently involved in a fight for survival.

“His thinking is that as long as the AKP comes to power on its own — even if it does so in a way that does not serve his leadership dreams — that will be enough for him maintain his dominance over Turkish politics,” Demirtas said.

“Any parliamentary majority for the AKP will also ensure that the various parliamentary commissions are headed by AKP deputies. This will prevent the opposition from opening certain files against him,” Demirtas added. He was referring to continuing calls by the opposition to have Erdogan and former ministers under him when he was prime minister to be investigated for corruption.

“This is a matter of survival for Erdogan. But it is highly doubtful that elections held under the extraordinary circumstances we see Turkey in today will provide any auspicious results for the country,” Demirtas said.