Why the Gulf isn't to blame for Syrian refugee crisis 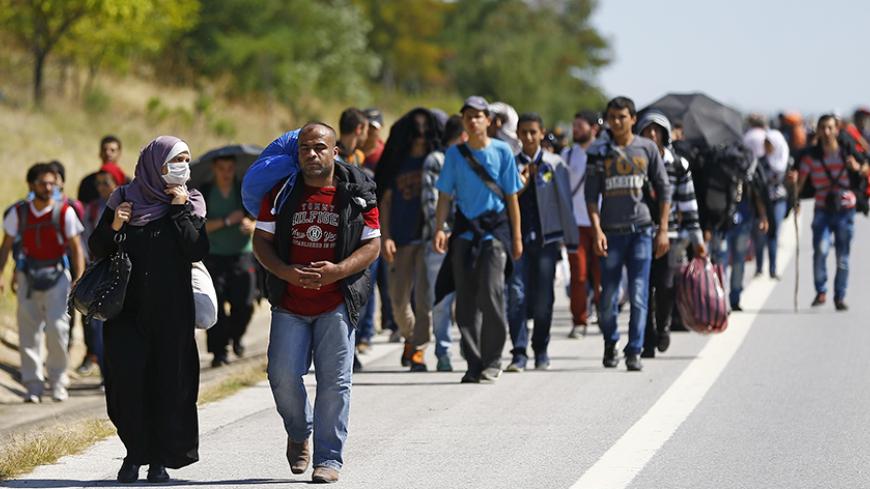 Syrian migrants walk toward the Greek border on a road near Edirne, Turkey, Sept. 15, 2015. - REUTERS/Osman Orsal

As European nations appear to be opening their doors to Syrian refugees, Gulf countries face mounting criticism for their alleged refusal to follow suit.

International anger is palpable. Just Google “why aren’t Gulf countries” without completing the question and links will appear to articles blasting oil-rich Arab states for their perceived indifference to the plight of Syrians fleeing their country’s tragic civil war. The Washington Post claims that Gulf countries are doing “next to nothing” for Syrian refugees, and an Amnesty International infographic shows how only five countries — Turkey, Lebanon, Jordan, Iraq and Egypt — host 95% of the refugees. Even Saudi Arabia’s announcement that it will help serve Syrian refugees’ religious needs by funding the construction of 200 mosques in Germany was met with derision.

Yet Saudi Arabia, the United Arab Emirates, Qatar, Bahrain and Kuwait see the criticism as unfair. Abu Dhabi’s government-owned The National newspaper recently ran an editorial to remind the world that since the Syrian civil war began in 2011, 100,000 Syrians have moved to the United Arab Emirates. A total of a quarter-million Syrians now live in the UAE.

Saudi Arabia is defending its record more forcefully. On Sept. 11, an unnamed official at the Saudi Foreign Ministry claimed Saudi Arabia had received around 2.5 million Syrians, though the actual number is probably between 100,000 to 250,000. The Saudis also claim to have provided approximately $700 million to Jordan and Lebanon — although that figure falls far short of the $5.5 billion Turkey has spent.

So why is there a discrepancy between Gulf countries’ official positions on Syrian refugees and their alleged inaction? According to a Bahraini analyst who spoke to Al-Monitor on condition of anonymity, “Geography matters.” He said, “Unlike Turkey, Jordan or Lebanon, the Gulf states share no land borders with Syria. And in contrast with Europe, Gulf states are inaccessible via the Mediterranean.” In other words, most Syrians find it more convenient to head to Europe than the Gulf.

Another reason is the traditional Arab taboo against boasting about one’s charitable efforts. Riyadh’s Sept. 11 announcement said, “The Kingdom of Saudi Arabia does not intend to speak about its efforts to support Syrian brothers and sisters during their distress.” It is poor form in Arab culture to praise what is essentially a humanitarian obligation.

Another problem is that Gulf countries are not signatories to the Geneva Convention on the status of refugees. When Syrians come into Saudi Arabia or the UAE, they are not officially registered as “refugees” but as “guests” or “workers.” Treating refugees as “guests” carries an element of prestige for the host country. The government of Turkey, party to the 1951 convention, also has preferred to call the Syrians who fled there “guests” or “visitors” to show its domestic supporters and the international community that it was wealthy enough to provide assistance without outside interference.

There is also a mix of socio-economic and domestic political considerations at play. A Dubai-based Turkish professional who spent years living in Qatar argues that while Saudi Arabia could absorb more Syrians because of its large territory and population, smaller countries such as the UAE, Qatar and Bahrain do not have that luxury. The Turkish national told Al-Monitor on condition of anonymity, “Qataris and Emiratis do care about Syrian refugees and they have helped them financially. But these countries are rich precisely because they have small populations and land — they are concerned that they could be flooded demographically, economically and politically.” Qatar and the UAE are very safe places but local citizens are already outnumbered by foreign workers, leading the countries' leadership to wonder whether they could cope with disorder if an uprising by the foreigners occurred.

Fahad Nazer said those concerns exist, but with a caveat. A senior political analyst at JTG, Inc. in Washington and a former analyst at the Saudi Arabian Embassy, Nazer told Al-Monitor in an interview that Riyadh “is indeed trying to reduce the number of foreign workers in its private sector to make room for the thousands of Saudis who enter the job market every year.” Furthermore, he added, “the Saudi government is also incurring a significant budget deficit this year because of the steep drop in the price of oil. However,” he warned, “There is little evidence to suggest that demographic challenges and budgetary constraints are major determinants of the government's policy.”

Adam Coogle, a Middle East researcher at the global advocacy organization Human Rights Watch, concurred. Over email, Coogle wrote that he finds it “hard to imagine any Gulf country making a demographic argument for keeping [Syrian refugees] out, given the enormous number of migrants living in Gulf countries already.”

But even more salient than demographic challenges are the security risks that seem to lurk in many people’s minds. There is a genuine fear that no matter how unlikely, al-Qaeda and Islamic State militants could blend in with Syrian refugees who are moving into North America, Europe and the Gulf. “I haven’t heard this,” said Coogle, “but it’s certainly reasonable to imagine that Gulf countries have security concerns on this issue. All countries in the region have become fearful of [al-Qaeda/IS] infiltration.”

“I also don’t think that security concerns are a major factor,” said Nazer, adding, “It is certainly not beyond [IS] to try to exploit the suffering of Syrian refugees to its benefit. It’s very clear that [IS] doesn’t believe in any moral red lines.”

In the final analysis, Gulf countries — just like Turkey, Iran and Russia — deserve blame for their role in and inability to stop the civil war in Syria. And just like European countries, the United States and Canada, Gulf countries could do a better job of sharing the burden of caring for Syrian refugees with Turkey, Lebanon, Jordan, Iraq and Egypt. But whatever Gulf countries’ faults, failing to help Syrian refugees is not one of them.