The qualifying soccer match between Palestine and the United Arab Emirates ended in a draw; both sides considered it a victory for Palestine for being able to host a home game on Palestinian territory. 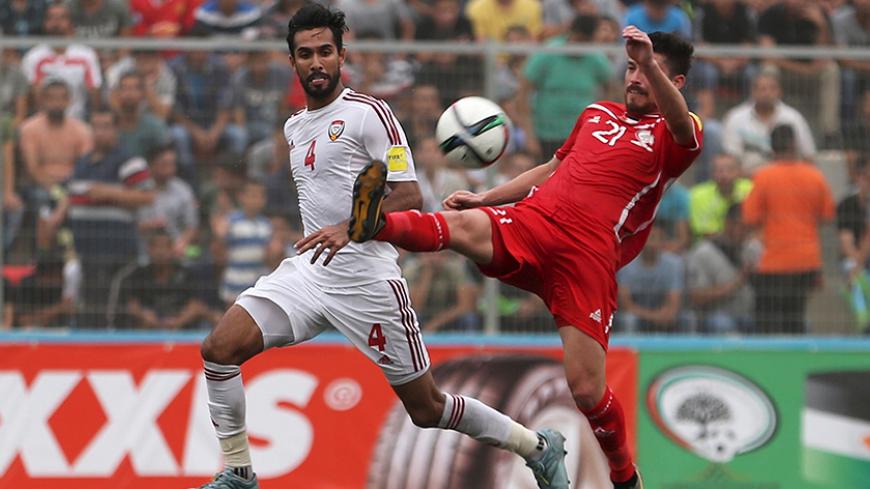 Alexis Norambuena of Palestine (R) fights for the ball with Habib al-Fardan of the United Arab Emirates during their 2018 World Cup qualifying soccer match at Faisal al-Husseini International Stadium in the occupied West Bank town of al-Ram, near Jerusalem, Sept. 8, 2015. - REUTERS/Mohamed Torokman

A scoreless soccer game can hardly be considered a victory, but for the Palestinian national team, tying the powerful team from the United Arab Emirates on Palestinian soil was a double victory. Even the leading newspaper in the UAE, The National, described the match as such. On Sept. 8, the Abu Dhabi daily called the results of the historic game, held on the outskirts of occupied Jerusalem, a win for the Palestinian team. It is rare to be able to use the word “historic” to describe a soccer match, but the FIFA World Cup and Asian Cup qualifying match between Palestine and the UAE was truly momentous by local standards.

For an Arab soccer team to agree to cross borders controlled by a country with which they are officially at war takes courage, and in this case, reflected genuine support and solidarity with the Palestinian people. UAE coach Mahdi Ali echoed his support for holding the match in an interview with the Emarat Sports website on Sept. 8, saying, “As Emiratis, we consider ourselves victorious just by being in Palestine, which I wish to see as a free and independent state.” After the game, Ali, along with a small group of administrative officials, visited and prayed at Al-Aqsa Mosque.

Ensuring the visit to Palestine was not easy. Jibril Rajoub, head of the Palestinian Football Association, had been exerting great effort to have official home games played in Palestine. After confronting difficulties with Israeli officials during the FIFA congress held in Zurich on May 29, he was assured that games would not be blocked. FIFA guaranteed Rajoub that the Israelis would not put restrictions on visiting teams or on the movements of Palestinian team members, in particular players from Gaza.

A FIFA-appointed monitoring committee headed by Tokyo Sexwale, a well-known anti-apartheid South African activist, was entrusted with ensuring that games take place without problems. Sexwale held meetings with Israeli and Palestinian representatives Aug. 26, and agreement was reached on a mechanism for a continuous dialogue to resolve any issues that might arise.

The 43-member UAE team, along with administrative staff and journalists, crossed the King Hussein Bridge from Jordan on Sept. 6. Mohammad Qadri, a sports reporter and head of Jordan’s Sports Channel, described the trip to Al-Monitor as having gone smoothly. “On the Jordanian side, the players didn’t have to leave the bus, and on the Israeli side, they processed the players in record time,” said Qadri, who frequently travels to Palestine. “The trip from the Grand Hyatt in Amman to the Movenpick in Ramallah took around four hours.”

Tareq Batat, head of the Palestinian team's fan club, told Al-Monitor that the qualifying match had succeeded where politicians have failed. “This is a huge accomplishment, as we have united the entire Palestinian people, who came out to support the national team,” he said. Video footage from the game, held in Faisal al-Husseini International Stadium in al-Ram, presented a reflection of Palestinian society, with a strong contingent of women cheering on their national team.

Batat is happy that with this qualifying match, the Palestinian national team cemented the right to host official games in Palestine. “Many parties, including Israelis, fought hard to prevent this match from taking place, but our persistence paid off,” he said.

Immediately after the match, Batat met with the visiting players in their locker room. “While they were unhappy that they didn’t win, they were proud to have played in Palestine and showed great respect for our team and our fans,” Batat said. The UAE team members told him that they had been apprehensive about coming to Palestine, but were pleasantly surprised after arriving.

Keeping the UAE from scoring was no easy feat. Haitham Deeb, a defensive player for Palestine, told Al-Monitor, “We spent a lot of time preparing for this game, including here and in Germany, and we played a game with Lebanon.” Deeb, from the Galilee village of Majd al-Krum, said that playing at home made a big difference. “We are so used to playing home games outside of Palestine. Having our fans cheering us on raised the pressure on us to perform well, and thank God we succeeded in accomplishing a draw.”

The next challenge facing Palestinians is to convince a reluctant Saudi team to come to Palestine for a home game scheduled for October. Palestinian managers, players and fans are convinced that the success of the visit by the UAE national team will be a positive factor in convincing Saudi players to come to Palestine. For many, it is not only about the game, but a public demonstration that Palestine exists and continues to fight for its place among the nations of the world.