Following popular anger from Palestinian fans, a decision to relocate a soccer match between the Palestinian and Saudi teams outside of Palestine has been revoked. 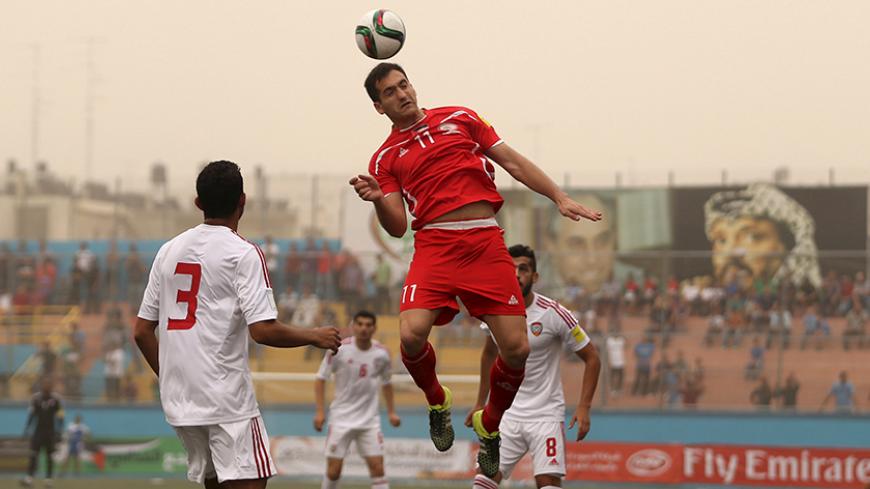 Matias Hadwa of Palestine jumps for a header during their 2018 World Cup qualifying soccer match against the United Arab Emirates at Faisal al-Husseini Stadium in the West Bank town of Al-Ram near Jerusalem, Sept. 8, 2015. - REUTERS/Mohamed Torokman

RAMALLAH, West Bank - Palestinian soccer may have won its biggest victory over its Saudi rival before the teams even enter the pitch.

The International Federation of Association Football (FIFA) has decided that the two national teams may play the second of two matches in the 2018 World Cup and the 2019 Asian Cup qualifications in Palestine after all, revoking an earlier decision to find a less controversial alternative. The reversal came after an Oct. 6 meeting in Zurich between FIFA President Sepp Blatter and the heads of the Palestinian and Saudi Arabian football associations, Jibril Rajoub and Ahmed Eid al-Harbi.

The spokesman for the Palestinian Football Association (PFA), Tayseer Nasrallah, told Al-Monitor, “A frank meeting was held in the presence of Joseph Blatter, and the participants agreed on the cancellation of the previous regulatory committee's decision, which consists of relocating the match between the Palestinian and Saudi national teams to neutral ground. They agreed to consider the decision void and illegal.”

Nasrallah added, “It was decided to delay the date of the second game that was scheduled for Sept. 13 until further notice. The decision of the organizational committee regarding the venue of the game will be respected.” He noted that the president of the PFA insisted on Palestine’s right to play the game on its home turf, and that this claim was backed by FIFA.

FIFA had decided to relocate the game to a neutral site, shocking the Palestinian public and angering the PFA. A source from the association told Al-Monitor on condition of anonymity that the decision is “a blow to Palestinian sports in terms of stressing the right to a home stadium for the national team.”

The source added, “It seems Saudi Arabia exercised its influence and made deals within FIFA to get this decision. However, we reject and condemn it. The PFA is stressing on having the game on Palestinian territory and we will make our final decision within a few days.”

Meanwhile, Nasrallah called FIFA’s decision unjust and told Al-Monitor it angers the Palestinian street and entire sports family. “During the meeting in Zurich today, we expressed our insistence on our right to play in Palestine and we supported Blatter based on FIFA’s regulations and laws,” he said.

On Sept. 11, the Saudi Arabian Football Federation (SAFF) announced it would refuse to participate in a game in the West Bank, apparently for fear of being accused of normalization with Israel. However, at that time, FIFA confirmed that the game between both national teams will be held on Palestinian territory, stressing the Palestinians’ right to host the game in their home stadium.

Regarding FIFA's change in position, Nasrallah said, “Certain arrangements made within FIFA resulted in such a decision. Chairman of the organizing committee at FIFA Michel Platini informed us that he did not know anything about the decision, and we told FIFA that this decision is contrary to the law. However, during the meeting in Switzerland, we held on to our right and we will not let go of it. We will keep insisting on playing the game on our home ground.”

Rajoub and his Saudi counterpart met Sept. 21 to discuss where the game would take place, but they failed to reach an agreement. The Palestinian side suggested transferring Saudi players in Jordanian planes straight to Ramallah, without having to pass through Israeli checkpoints and having their passports stamped, but the SAFF rejected the idea.

Palestinians used hashtags on Facebook and Twitter such as #OurDignityInOurStadium, #HomeStadium and #SaudiArabiaPalestine to express their rejection of the decision and stress their right to a game in their territory.

Palestinians rejected the political pretexts used by Saudi Arabia to justify its refusal to visit Palestine, including the “rejection of normalization and contact with the Israeli occupation,” and accused Saudi Arabia of having secret relations with Israel, citing the alleged phone conversation between Israeli Prime Minister Benjamin Netanyahu and Saudi King Salman bin Abdul-Aziz Al Saud to discuss the latest developments at Al-Aqsa Mosque, in addition to the open regular meetings of former Saudi diplomat Anwar Eshki — who is close to the Saudi king — with Israeli officials in Washington and praising Netanyahu and the possibility of allying with him to confront Iran.

A number of Palestinian Twitter users expressed their anger at Riyadh's stance, in statements like "Visiting the prisoner does not mean recognizing the jailer." They believe that instead of flaunting the decision to relocate the game, Saudi Arabia should be determined to visit the Palestinian team and support its right to a home stadium, with some demanding the PFA relocate the game to Iran, Algeria or Yemen to spite Saudi Arabia.

Nasrallah said, “At first, the PFA expressed its understanding of the Saudi position with its alleged political reasons, but we later found out that these were false pretexts after the SAFF went to FIFA and rejected the solutions we had suggested.”

He added that the PFA's insistence on playing the game in Palestine is to promote the right to a stadium at home and not allow the Palestinian sport to be moved to neighboring countries.

Some Saudi journalists attacked Rajoub. Faraj accused him of being an “intelligence man who wants to drag Saudi Arabia into normalization with Israel.” Meanwhile, Harbi attacked the Palestinian journalists, describing them as “soldiers,” in the sense that they work under orders from Rajoub, while the Palestinians accused Saudi Arabia of exercising its influence and imposing its opinion on FIFA. In a TV statement Sept. 29, Rajoub said, “The situation is being taken advantage of in FIFA, causing chaos and confusion to pass this unjust decision against Palestinians.”

Nasrallah said, “A lot of the circumstances surrounding the decision were unknown to us, but they began to be revealed after Platini and Sheikh Salman bin Ibrahim Al-Khalifa, head of the Asian Football Confederation, said they had nothing to do with the decision, which makes us wonder who really made it."

Palestinians consider FIFA’s move a partial victory for their right to play on their home turf, and hold that they will achieve complete victory when the game between the Palestinian and Saudi Arabian teams is played on Palestinian land.