The Gaza blockade has been in place for about eight years now and it does not seem like the living conditions are going to improve soon, so some Palestinians try to infiltrate Israel to find better opportunities. 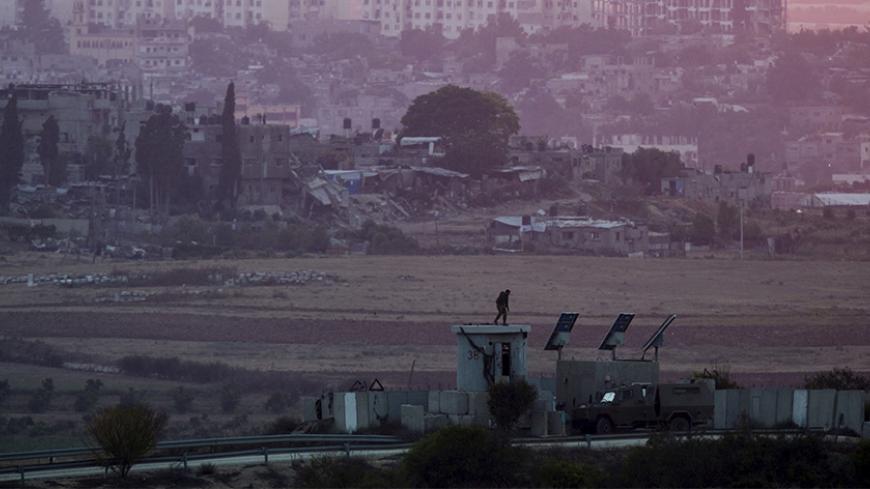 An Israeli soldier stands atop a military post on the border with northern Gaza (seen in background), July 6, 2015. - REUTERS/Amir Cohen

High unemployment rates and poor living conditions are driving some Palestinians to seek relief by illegally crossing into Israel.

The Israeli army announced Sept. 14 that it had arrested five Palestinians who had breached the border fence east of Khan Yunis in the southern Gaza Strip. On Sept. 20, a security source in Gaza said, on condition of anonymity, that 45 young men had tried to infiltrate Israel from the Gaza Strip just since the beginning of this month.

Those numbers shed light on the phenomenon of young Palestinians risking detention or even death to seek job opportunities in Israel. The eight-year blockade of Gaza has created an incredible unemployment rate there. The Palestinian Central Bureau of Statistics said the rate reached 44% in April.

On Sept. 16, Al-Monitor visited the eastern border of the Gaza Strip where Palestinian infiltration areas are concentrated, specifically in Kissufim, al-Ayn al-Thalitha, Wadi al-Bashor and the dirt road called Jakar Street, which was created in May by Izz ad-Din al-Qassam Brigades, the military wing of Hamas.

Iyad Bezm, spokesman for the Interior Ministry in Gaza, told Al-Monitor that Gaza security forces try to keep infiltration to a minimum. However, the Israeli army controls some areas that it uses "to exploit the Palestinian youth to serve the intelligence service," sending them back across the border as agents for Israel.

He added, “Infiltrators from Gaza range between 17 and 24 years of age and their primary motive is to escape the poor economic situation. The security services in Gaza deal with each individual on a case-by-case basis by subjecting them to investigation to find out the motives of their infiltration. These services take all procedures to prevent infiltration, given its security risk to the people of the Strip and the resistance." The services use preventive measures such as awareness campaigns in border areas to discourage infiltrators and reinforcing security forces in infiltration areas.

In addition to escaping poverty, infiltrators have three main motivations: to escape criminal prosecution, to act as an agent for Israeli intelligence and to avoid falling into the hands of armed Palestinian factions. The factions have executed people trying to escape to Israel, especially during the 2014 war on Gaza.

During recent weeks, particularly since the beginning of August and until the time of this writing, infiltration attempts from Gaza to Israel have been on the rise. Some succeed and others fail to cross the Palestinian borders, because the Israeli army prohibits Palestinians from entering an area within 300 meters adjacent to the border. Anyone who enters this buffer zone can be shot at or arrested, given its security sensitivity.

Rami Rashid is one of those who tried to infiltrate Israel but was prevented by the Palestinian security forces. He told Al-Monitor, “The reason I thought about fleeing to Israel is the bad economic situation in Gaza. I am a father of seven sons and have been unemployed for eight years. The worst thing that could happen is that I [might] get arrested by Israelis. In prison I would get three meals a day, watch television, and get the salary paid by the Palestinian Authority to Palestinians held in Israeli jails.”

On another note, on Sept.11, the Ministry of Interior and National Security threatened to take punitive action against infiltrators who cross the border fence into Israeli settlement blocs bordering Gaza. The ministry said it had not yet determined what the punishment would be.

Moreover, Hamas-run Field Control Forces deployed on the Gaza border try to deter infiltration into Israel by firing warning shots. Although Gaza security services guard the Strip's eastern borders, some Palestinians manage to reach Israel, meaning the security forces could be partially responsible for this phenomenon.

Islam Shahwan, a researcher specializing in security at Al-Awda University College in Gaza, told Al-Monitor, “Statistics revealed that the number of infiltrators is on the rise, while security services in Gaza reported more than 230 cases during 2014. These numbers are alarming and threatening to the Palestinian society. Statistics indicate a steady increase during 2015, especially after the war on Gaza in 2014.”

Moreover, Al Mezan Center for Human Rights in Gaza said in a Sept. 13 press statement that the Israeli army had arrested 42 Palestinians who tried to infiltrate Israel since the beginning of 2015.

Shahwan, who is also a former spokesman for security services in Gaza, added, “The security situation in the eastern border of Gaza is delicate, and the sensitivity of the area does not allow the Palestinian security members to fully control the borders. Israeli fire often targets Palestinian security forces, which requires these forces to establish field checkpoints and border-monitoring points where security forces are deployed in their civilian uniform to obstruct infiltration of Palestinians to Israel, and this is not seasonal or an occasional security campaign."

The increasing number of infiltrators from Gaza into Israel poses several risks to the Palestinian community, especially from a security perspective, given the possibility that Israel's internal security service, Shin Bet, exploits some infiltrators to undermine Gaza’s security. This is despite the fact that a large number of these infiltrators are only seeking to cross to the Israeli side to escape Gaza’s poverty and unemployment.

Al-Monitor met a Palestinian security official in Gaza assigned to follow up on infiltration incidents. The official, who preferred anonymity, said, “The Shin Bet subjects infiltrators to security questions about the resistance security points and asks them to determine the coordinates of the location of these members on maps prepared in advance, as well as about the emplacements of missiles and defensive and offensive tunnels, which makes these infiltrators possible targets to be recruited for Israel's intelligence services.”

The increasing number of Palestinian infiltrators from Gaza to Israel coincides with their deteriorating situation. Gazans are living under crippling and suffocating living conditions. Many don't have enough money to buy food, and sources of income are decreasing day by day. Many people live in tents and shelters because their homes were turned to rubble during the last war. Palestinian infiltrators to Israel are setting their sights on what they see as paradise, but in fact, they are heading toward the unknown.