The outburst by Knesset member Jamal Zahalka on the Temple Mount this week reveals the dangerous game he is playing at the sacred site, staging himself as a victim while world leaders gather at UN headquarters. 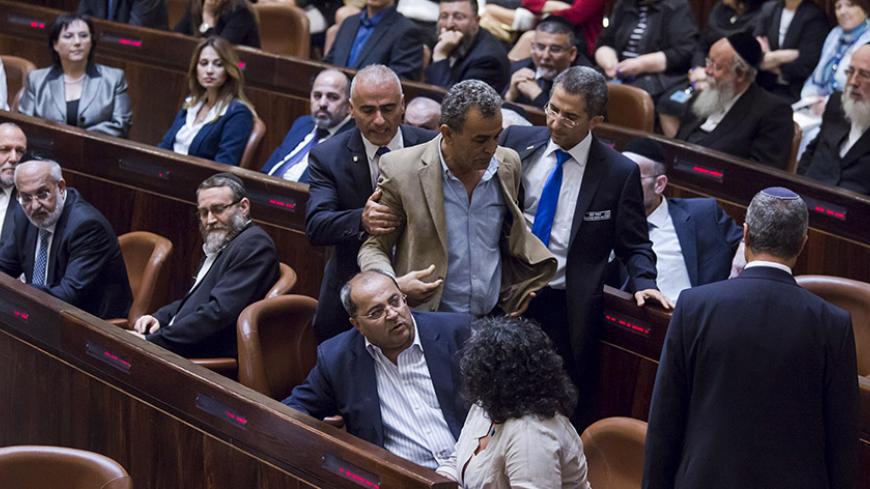 Jamal Zahalka (C), an Israeli-Arab lawmaker from the Joint List of predominantly Arab parties, is taken out of the Knesset during a speech by Israeli Prime Minister Benjamin Netanyahu, in Jerusalem, May 14, 2015. - REUTERS/Jim Hollander

The visit by Knesset member Jamal Zahalka (Joint List of predominantly Arab parties) to the Temple Mount on the morning of Sept. 29 gave the impression that he wanted to incite a major riot and drag the police officers accompanying a group of Jewish worshipers at the site into a conflict with him. Video footage of the visit featured later that day on various social media platforms and TV news showed Zahalka insulting the police and trying to provoke them.

Zahalka arrived at the site after several tense days in Jerusalem. Meanwhile, world leaders who had gathered in New York for the annual meeting of the General Assembly of the United Nations were keeping a close eye on the Temple Mount. In his speech, Egyptian President Abdel Fattah al-Sisi addressed the escalation in tensions, saying that events in Jerusalem and Al-Aqsa underscore the need for a “decisive final solution” to the conflict between Israel and the Palestinians. Upon leaving for New York, Israeli Prime Minister Benjamin Netanyahu said that in his speech he would “demand a halt to this wild incitement” on the Temple Mount.

As one of the most provocative members of the Knesset, Zahalka can be relied upon to exploit the sensitivity surrounding the Jewish High Holidays to the bitter end to advance his political agenda. This is especially true this year, when the atmosphere is particularly volatile. Furthermore, Zahalka seemed to want to direct a message from the Temple Mount to UN headquarters in New York to ensure that the issue remains on the international agenda.

Just 10 days ago, Zahalka traveled to Jordan as part of a delegation of Knesset members from the Joint List. In their meeting with Jordan’s King Abdullah II about tensions at the Temple Mount, they painted a bleak picture, claiming that Israel was attempting to seize control of the mosque and making conditions for Arab worshipers there more difficult. After the meeting, the king was quoted as saying, “I am following everything that’s happening closely and watching what will be in the coming days, and this will be an important subject in my meetings with world leaders at the UN next week.”

It is the right and maybe even the responsibility of Arab Knesset members to report to the Jordanian monarch, who carries responsibility for what happens at Al-Aqsa Mosque, about any changes to the status quo at the sacred site. After the 1967 Six-Day War, Israel’s government decided that management of the sacred site would be left in Jordanian hands, while ultimate sovereignty and security would remain with Israel. Nevertheless, the Arab Knesset members were not satisfied with meeting the Jordanian monarch and held another separate meeting on the same topic with Turkish President Recep Tayyip Erdogan on Sept. 21.

The one person who refused to participate in this meeting was Knesset member Aida Touma-Sliman, Zahalka’s colleague in the Joint List. She claimed that while the king plays an official role on the Temple Mount, Erdogan simply wants to introduce an Islamist element into the conflict over the sacred site. With her statement, Touma-Sliman exposed the dangerous game that Arab Knesset members are playing by inciting the riots on the Temple Mount. After all, why would such a distinguished delegation need to involve an inflammatory figure like Erdogan in an already volatile situation?

The visit by Arab Knesset members to the royal palace in Amman contributed nothing to restoring calm in Jerusalem and the Temple Mount. Furthermore, after watching the footage of Zahalka’s visit to the Temple Mount, the impression is that he wanted to set the site on fire and incite riots that would be impossible to control.

“Go to hell, you crazy criminals! This is my house. You’re not wanted here!” he shouted at the police. For their part, the police officers on duty at the site seemed to understand exactly what kind of trap Zahalka was trying to set for them. Knowing what it would mean to harm an Arab Knesset member on the Temple Mount, they chose to disregard his taunts. One of them was actually overheard telling his fellow police officers, “Ignore this.”

But Zahalka persisted. He would not calm down. He was on a mission, and he intended to complete it. He wanted to create a disturbance on that relatively quiet day on the Temple Mount and get himself into the headlines. “Don’t touch me! You’re all Kahanists; you’re all fascists; you’re all racists!” he screamed, cursing wildly. Much to his disappointment, however, he was unable to drag the police into a confrontation with him.

What Zahalka did manage to do was to become something of a star in newscasts in Israel and around the world. In the internal struggle between the Arab Knesset members over who stands out most in the headlines, he emerged as the undisputed winner. He even beat out Knesset member Haneen Zoabi, who said in an interview with Army Radio, “Everybody knows who is closer to the Nazi regime: me or the State of Israel.”

In an interview with Army Radio this week, Defense Minister Moshe Ya’alon accused Hamas and the Islamic Movement with attempting to fan the flames on the Temple Mount. Two days later, on a visit to Israeli settlements surrounding the Gaza Strip, he offered an even starker assessment of the situation, claiming that incitement in the region is also coming from the Israeli Palestinian community, including “some of their politicians, who are trying to win political points on the issue of the Temple Mount.”

Given Zahalka’s outburst, Ya’alon’s comments seem to be an accurate reflection of the situation. Footage from the visit showed Zahalka to be a provocateur and the last of the rioters. In other words, he was the exact opposite of what one would expect from a responsible public figure. We can only hope that those in New York also understand what kind of game he is playing.