Reports indicate that many Holocaust survivors not only live in poverty, but also suffer from loneliness. 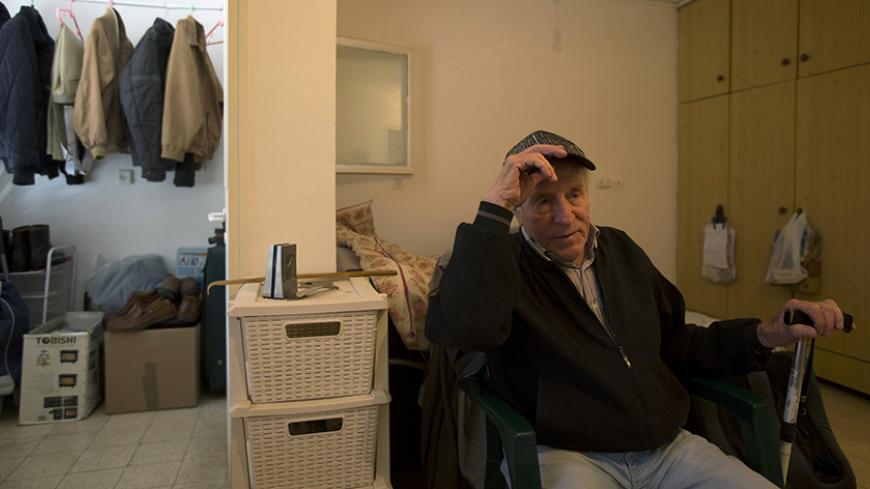 Transylvania-born Holocaust survivor Dov Yaacobovich, 84, sits in his home in Tel Aviv, April 3, 2013. Some 192,000 Holocaust survivors live in Israel and about a third have sought aid from the Foundation for the Benefit of Holocaust Victims in Israel. According to surveys by the foundation, 19% of the survivors have admitted to going without adequate amounts of food and 14% had to forgo medical treatment at least once a year due to financial hardship. - REUTERS/Ronen Zvulun

In April 2013, some three months after elections and the establishment of a new government, the Knesset’s Social Welfare Committee held a heated discussion that is etched deep in Israelis' memories. The agenda focused on the results of a survey conducted by the Foundation for the Benefit of Holocaust Survivors that found 67% of survivors unhappy with the way the government was dealing with their specific needs. Some 22% of respondents even said that the government's handling of Holocaust survivors had deteriorated.

Apart from the jarring statistics, another element that made the debate so hard to forget were the cries of Dora Roth, a Holocaust survivor who asked in the simplest of terms, “What did you do with the money?! Seeing a Holocaust survivor that doesn't have money for food or heat is your disgrace, the disgrace of this house [of parliament]!”

This was not the first time that the people of Israel had been exposed to the horrific economic crisis faced by Holocaust survivors. In 2007, the journalists Orly Federbush and Guy Meroz produced the documentary film “Reparation Morals.” In it, they revealed that 80,000 Holocaust survivors in Israel lived in abject poverty. Many of them lacked money for medicine or fuel to heat their homes in winter.

The question raised at that time was when did the state disavow its responsibility? What exactly happened to the $800 million in reparations that the German government gave to Israel in the 1950s? That money should have gone to meet all of the survivors’ needs until the end of their lives. Since the release of “Reparation Morals,” before every Holocaust Memorial Day and before every election, the issue of “needy survivors” makes the headlines. That is why it was especially surprising to learn during the 2013 Knesset committee debate that six years on, there were still Holocaust survivors going to bed hungry.

In June 2014, about a year after the debate, the Knesset approved an amendment to the Law Concerning Benefits for Holocaust Survivors. The new law included a multibillion-shekel National Assistance Program, advanced by Finance Minister Yair Lapid and Social Welfare Minister Meir Cohen, both from Yesh Atid. The law provides annual grants of thousands of shekels to survivors who do not receive state assistance of more than $260 per month, reduced prices for medications and other benefits. While this was clearly a landmark piece of legislation by Yesh Atid and the last Knesset, it still failed to meet all the growing medical and welfare needs of the elderly survivor population. The budgets allocated were simply inadequate.

On Sept. 13, the eve of Rosh Hashanah (Jewish New Year) 5776, Al-Monitor checked poverty statistics on survivors tracked by the Foundation for the Benefit of Holocaust Survivors. Based on the foundation’s information, as of September 2015, Israel was home to some 189,000 Holocaust survivors, 25% of whom lived below the poverty line. According to these same statistics, the average age of survivors is 84. About a third of them live alone.

Isolation and loneliness have far-reaching effects on the well-being of the elderly survivors, sometimes even affecting their health. In a study that the foundation commissioned from the Brookdale Institute in 2013, 40% of them reported feeling lonely. Another investigation, conducted after the survivors were matched with volunteers who visited them regularly, found that feelings of loneliness had declined.

“During the holiday season, when we all gather together with our families around the holiday table, we must remember that about one-quarter of Holocaust survivors live below the poverty line. It is horrifying, because what these statistics and percentages mean is that we have 45,000 victims of the Holocaust who cannot live out their old age in dignity,” said Limor Livnat, head of the foundation and a former government minister.

Livnat pays special attention to the issues of loneliness and isolation among the survivors. She told Al-Monitor, “Poverty isn’t the only problem faced by victims of the Holocaust. The worst disease of old age is loneliness. That is why, apart from caring for the physical needs of the survivors, by providing them with dental care, hearing aids, glasses, home repairs, etc., the foundation has also chosen the problem of loneliness as one of its banner causes.”

According to Livnat, some 10,000 Holocaust survivors in Israel have no family. “Nevertheless, even survivors who established families still live in the shadow of the memories, discomfort and difficulties resulting from all the suffering they experienced.”

Loneliness is just one example of a problem affecting the already dismal quality of life of the survivors. It is the kind of problem that falls between the cracks, with no official state budget to tackle it. While poverty and disease can be gauged and measured, isolation and loneliness are not necessarily the consequence of a lack of family or friends. Feeling lonely extends beyond those who have no family, and for this reason, every week the foundation deploys more than 1,800 volunteers throughout the country to visit survivors. They remain in long-term contact with the survivors to help relieve their loneliness.

The foundation also operates a program called Connected, which provides each survivor with a computer, an Internet connection and a volunteer to teach them how to use the computer and navigate the web. Some of the volunteers are students at the ORT network of high schools. Because of their relatively young age, they visit the survivors in pairs. Other volunteers include university students, senior citizens, high-tech employees and even police officers.

An anticipated 1% cut in the value added tax will reduce the state’s tax income by about 5 billion shekels (some $1.3 billion). This reduction must not be allowed to affect Holocaust survivors. The State of Israel cannot permit itself to have even a single survivor who feels alone or lives in want and poverty. As long as there are still thousands of indigent Holocaust survivors, the problem should continue to weigh heavily on the national conscience.