Israeli Prime Minister Benjamin Netanyahu allocates huge resources to the Iranian nuclear threat, which he qualifies as "a second Holocaust," but is facing criticism for not doing enough to assist elderly Holocaust survivors. 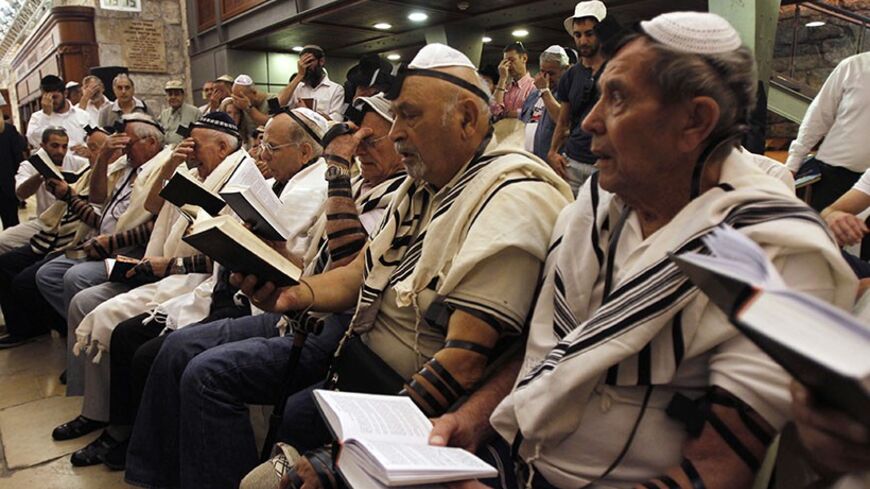 The Holocaust has become a central theme of Benjamin Netanyahu’s rhetoric and his diplomatic struggle to block Iran’s nuclear program ever since he returned to power in 2009. As part of an effort “to prevent a second Holocaust,” the Israeli prime minister has been active in the diplomatic arena, while at the same time making military preparations to contend with the Iranian nuclear threat. One step he took, as former Prime Minister Ehud Olmert revealed, was to invest 11 billion shekels (just over $3 billion) in a plan that was ultimately shelved.

There was hardly a speech delivered by Netanyahu during these years — whether in Israel or the most prestigious forums in the world — in which he did not exploit for propaganda purposes the silence of the world powers during World War II, while the Jewish people were being annihilated, to make Israel’s case. The comparison is clear: Given the indulgent attitude of the world powers toward Iran today and the clear preference of the West to find a diplomatic solution, Israel must adopt a proactive approach to defend itself against Iran.

Everything that Netanyahu did in those years implied that he was acting out of a conscious need to become the one to prevent a second Holocaust. Yet, those same years were also the period in which the economic, medical and emotional state of Holocaust survivors living in Israel kept declining because of their advanced age alongside their physical and emotional scars from the war. Their medical costs have increased, and their ability to pay for treatments, medication, food and heating in winter has been reduced significantly. Social Security payments they receive are absorbed by the steep cost of living and cuts to pensions, implemented by none other than Netanyahu, as part of the economic decrees he devised as finance minister in 2003.

An abundance of reports in the media appeared about the outrageous poverty faced by Holocaust survivors, and the issue has risen to a place of prominence on the public agenda. Every so often demonstrations took place before the Knesset and government ministries requesting what seemed to be so obvious: that survivors be allowed to live their final years in dignity.

If there's a moral low point, it is the sight of a childless Holocaust survivor living in a crumbling one-room apartment, shivering from the cold during the long winter nights, eating meals provided by charitable organizations, unable to obtain essential medications. The same picture repeats itself again and again, in various iterations, in all reports about the failure in the treatment and care received by Holocaust survivors.

The person responsible for this failure is none other than Netanyahu, prime minister since 2009 and minister of finance from 2003 to 2005. A single decision by him would have long put an end to this disgraceful situation. After all, he is well-aware that not everything is a matter of “meeting budgetary objectives.” As it turns out, when there is a military threat, it is possible to find 11 billion shekels for preparations, without having that money go through ordinary channels. At the same time, however, Holocaust survivors today are forced to run an exhausting bureaucratic gantlet just to get a few hundred more shekels, which are vital to their very existence.

They are sent knocking on the doors of charitable foundations and funds to plead for help. Having suffered so much in their lives, they are now forced to become a human monument to the dismantling of Israel's social integrity. But beyond everything else, the degrading old age experienced by 50,000 Holocaust survivors — who are living beneath the poverty line — out of the 193,000 total survivors in the country (based on figures from the Foundation for the Welfare of Holocaust Survivors), is yet another expression of the lack of leadership characteristic of the Netanyahu government's era.

Just imagine Netanyahu banging on his desk and ordering the bureaucrats in the Finance Ministry and any other relevant government agency to relocate all Holocaust survivors living in decrepit homes to suitable living quarters, to locate every Holocaust survivor in need and pay for all his medication and other basic needs, and to instruct the Ministry of Education to launch an “Adopt a Survivor” program, so that today’s youths could provide companionship to the loneliest among them. Sometimes leadership is the ability to force the government bureaucracy to do the right thing, especially in a time of moral crisis.

Ariel Sharon knew how to use this kind of leadership for better or worse. Sharon was minister of construction and housing when the enormous waves of immigration from the former Soviet Union arrived in the country in the early 1990s, and it became necessary to find housing solutions for hundreds of thousands of people in a short time. In response, he set the entire bureaucratic machinery of his ministry in motion. He demanded ad hoc solutions — which those in his ministry knew how to come up with — that resulted in everything from the construction of new apartments to the creation of caravan neighborhoods. And Sharon was not even prime minister at the time.

According to the most recent study conducted by the Foundation for the Welfare of Holocaust Survivors, some 1,000 survivors die every month. This means that within just a few years, this segment of the population will be gone. Upon signing the Reparations Agreement with West Germany in 1952, the State of Israel made a commitment to use the money it received — about 3 billion German marks ($2 billion) — to care for Holocaust survivors for the rest of their lives. Ultimately, that money was used mainly to strengthen the country militarily.

On April 27, just a few hours before the start of Holocaust Remembrance Day, the government approved a national plan to provide NIS 1 billion (about $287 million) in emergency aid to Holocaust survivors. It is too little too late. I listened to Netanyahu's speech later that evening at the Yad Vashem Holocaust Museum. Once again, it was a skillful blend of rhetoric about the destruction of European Jewry and his own efforts to prevent a second Holocaust.

At the start of his speech, Netanyahu told his audience that on that very morning he had met in his office with Fela Raviv, an 82-year-old Holocaust survivor. ''It was important for her to tell me on this day of her memories as a child of 7 who was forced to leave her 2-year-old sister. Those memories are always with her,'' Netanyahu shared with the audience. ''She told me, 'I don't remember what happened yesterday or the day before that, but as is the way of memories at my age, I remember the sad, tearful eyes of my 2-year-old sister whom I left behind to die,'" he continued.

At that point in his speech, instead of making a commitment that as long as he is prime minister Raviv and her friends will be entitled to a life of dignity, he went on to talk about the Iranian threat and what he is doing about it. He had used the Holocaust survivors, and now he left them behind. And he was most probably pleased with himself for having delivered another good speech.