A weakened Abbas cannot save Hamas

The Hamas movement should have realized long ago — not now that it is too late — that it cannot survive without the rule of Palestinian President Mahmoud Abbas over both the West Bank and the Gaza Strip. 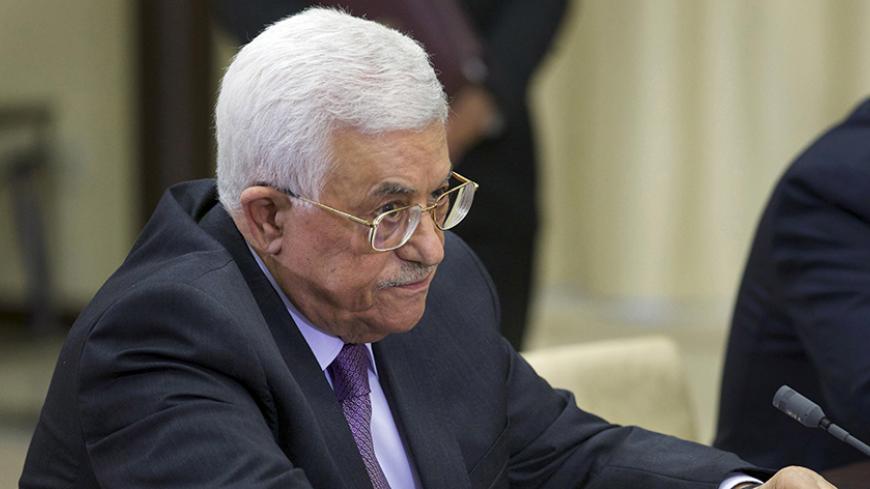 These are no longer signs of distress; rather they are calls for help, coming simultaneously from both Palestinian leaderships in the Gaza Strip and the West Bank. Both political leaderships, which tore the Palestinian Authority (PA) into two entities, have reached almost at the same time a dead end and a major leadership crisis. Regarding the question that greatly preoccupies Palestinians today — namely which movement is more to blame for the situation — there is no one definitive answer. Each one of them embraced markedly different avenues and ideologies. To date, neither one proved successful: neither Hamas’ armed struggle nor the conciliatory approach of Palestinian President Mahmoud Abbas. Both leaderships are largely responsible for driving Palestinians to despair and hopelessness.

On his way to address the UN General Assembly in New York, Abbas — together with Russian President Vladimir Putin and Turkish President Recep Tayyip Erdogan — participated in the opening Sept. 23 of a large mosque in Moscow. At the same time, his associates relate, he received the results of the public opinion poll conducted in September by the Palestinian Center for Policy and Survey Research headed by Khalil Shikaki. According to the poll, about two-thirds of Palestinians are telling Abbas loud and clear that it is high time he stepped down. More than half the respondents in the West Bank and Gaza no longer believe in the two-state solution, while a large segment of the population (42%) supports — when asked about the issue in a general manner — the resumption of an armed intifada as the most effective way for reaching Palestinian statehood.

Abbas has openly said that unless a positive diplomatic change takes place within the coming months, he will step down. At a meeting on Sept. 20 with four former Israeli ambassadors to Paris — Daniel Shek, Nissim Zvili, Elie Barnavi and Yehuda Lancry — he reportedly said in a moment of candor, “I’m already old. If in two or three months’ time I see that there’s no hope, I won’t stay in the job.”

Should the Palestinian president go through with his threat to resign, the leadership crisis in the West Bank will also take its toll on the Gaza Strip and Hamas’ leadership there. As ironic as this may sound, Abbas currently embodies the last hope of the Hamas leadership to extract itself from the crisis it is submerged in. More than eight years after the military coup in Gaza, Hamas’ former Prime Minister Ismail Haniyeh told UN envoy to the Middle East Nikolay Mladenov on Sept. 17 that the movement would agree to let the PA — under Abbas — rule the Gaza Strip again. The main point now is for Hamas to be able to pay the salaries to the employees of its sprawling establishment, thus possibly also ensuring its own survival.

On Jan. 26, 2006, Hamas was elected to the PA by a landslide majority. Heading Hamas’ slate Change and Reform, Haniyeh probably did not imagine that he would be able to provoke such a wave of support within the Palestinian street — people who voted for Hamas not solely on the basis of its ideology but also as an act of punishing Fatah and Abbas for the many years of corruption in the PA, and its failure to bring about a diplomatic solution.

During that historic election campaign, the Hamas leadership hoped to win one-third of the votes at the most, becoming a partner — even if unequal — to the establishment of the would-be Palestinian state.

Abbas tried to turn Hamas’ win into an empty vessel. Resorting to various subterfuges, the PA refused to hand over control of its institutions — mainly the security bodies — to Hamas, without which the movement could not deliver on its promise to the voters to bring about change and reform. Hamas chose to stage a military coup, forcibly seizing the PA’s institutions and dividing it into two regions. If it could not control all of the Palestinians, it would at least control the one half in Gaza.

Abbas and other PA officials believed that Hamas would beg the president to return to the Gaza Strip. Having felt disenfranchised since the movement’s establishment, Hamas leaders wanted to prove that they were worthy and capable of being in control while serving as a legitimate Islamic-oriented leadership. By contrast, Abbas and his officials wanted to prove to all the people who voted against them in 2006 that they had made a bitter mistake. Those ego and power games have been going on since 2007. Hamas and Fatah fought continuously over the issue of who the Palestinian people’s legitimate and sole representative is.

Those struggles thrust Gaza into three wars with Israel, as well as a crippling blockade, a terrible plight and a huge rift between the Palestinians. Having weakened each other, the two movements have reached the moment of truth battered and bruised.

Haniyeh admits now that the only way for his movement to survive is by calling Abbas to return to the Gaza Strip, while the president is indicating that he has reached the end of the road. Next week, the PA president is scheduled to deliver his address to the UN General Assembly. In an interview with Al-Quds Al-Arabi, he promised to drop a bombshell, yet he would not disclose which kind.

One thing is sure, however: Hamas cannot rely on Abbas. The president has not wanted Gaza since he was ignominiously driven out. Today, even if he wanted to go back, he would not be able to carry it on his shoulders.

But a bigger question remains: Why did it take Hamas more than eight years and three wars to realize what it should have known a long time ago? Why would its leaders think that they could go through with the irrational equation of calling for an armed struggle against Israel while still thinking that the latter would not curtail the daily consumption of its residents? It appears that Haniyeh and the rest of the movement’s leaders — who claim to be the Palestinians’ own flesh and blood — failed to realize that this ship has long sailed. Nowadays, Abbas is barely able to support himself.