Is Abbas spinning his wheels by meeting with Israelis?

Palestinian President Mahmoud Abbas has had numerous meetings with various Israeli delegations in hopes of resuming the peace talks stalled since 2014. 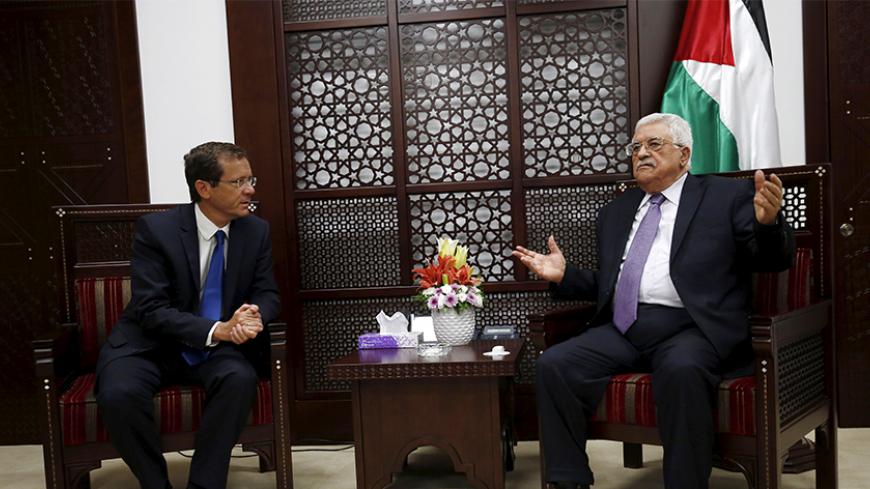 Palestinian President Mahmoud Abbas has been busy meeting with Israeli delegations despite the uprising that began in October, even though both sides have been in a political standoff since the suspension of official peace talks in April 2014. It's not clear whether his efforts will pay off.

Samira al-Halaiqa, a member of the Palestinian Legislative Council for Hamas in Hebron, told Al-Monitor, “Abbas’ meetings with the Israelis are fruitless. He would have been better off meeting with his Palestinian brethren to complete the reconciliation deal stalled for nine years since the start of the division between Fatah and Hamas in 2007. It is not reasonable that Abbas tries to appease the situation with the Israelis through continuous meetings at a time when the Israeli army keeps killing Palestinians around the clock.”

Most of Abbas’ meetings with Israelis are coordinated by Muhammad al-Madani, a member of Fatah’s Central Committee and the chairman of the Palestine Liberation Organization Committee for Communication with Israeli Society, formed by presidential decree in December 2012.

Abbas hosted two August meetings at the presidential headquarters in Ramallah. He met Aug. 2 with the Israeli Meretz delegation headed by its chief Zehava Galon, and on Aug. 18 with Zionist Camp leader Yitzhak Herzog, who warned Abbas of a third intifada.

Abbas also met in Paris in mid-September with former Israeli ambassadors Yehuda Lancry, Elie Barnavi, Nissim Zvili and Daniel Shek, and assured them he will not renounce the Oslo Accord or dissolve the Palestinian Authority (PA). On Sept. 29, former Israeli Minister of Construction and Housing Meir Sheetrit announced he had met with Abbas, without specifying the time and place. At that time, Abbas asked to meet with Israeli Prime Minister Benjamin Netanyahu at the latter's earliest opportunity.

Abdullah Abdullah, a member of the Fatah Revolutionary Council and the former deputy foreign minister of Palestine, told Al-Monitor, “Abbas’ meetings with Israelis aim to create a breakthrough in the positive discussions with the Israeli public over the future relationship with the Palestinians. The Israeli public has been brainwashed by the current Israeli government, which is keen on maintaining the Israeli people’s support.

"Abbas’ continued meetings with the Israelis fall within the scope of the PA’s convictions of the need to open dialogues with them and search for common ground, especially with those who fear for their future in the region as a result of the current Israeli government policies. These include the settlement expansion in the West Bank and Jerusalem, the suspension of the peace process and the ongoing siege on Gaza,” Abdullah said.

Those meetings did not stop after the uprising began Oct. 1. Israeli Channel 2 announced Oct. 9 that Netanyahu sent his special envoy Yitzhak Molcho and Maj. Gen. Yoav Mordechai, the Israeli coordinator of government activities in the territories, to meet with Abbas in Ramallah. The two men asked Abbas to discourage incendiary statements that fan the flames of anger against Israelis. Strangely enough, on Oct. 10, the Palestinian presidency denied the meeting was even held, though news about it spread in Arab and world media.

On Nov. 30, observers spotted Abbas and Netanyahu shaking hands for the first time since 2010 on the sidelines of the Paris climate change conference.

About two months later, the official Palestinian news agency, Wafa, announced Abbas had met Jan. 21 with an informal delegation of Israeli women. They informed him about activities they are conducting in Israel, such as demonstrations at Israeli military checkpoints calling for an end to Israeli violations against Palestinians. Wafa did not give any of the delegation members' names or political affiliations.

Abbas met that same day with a delegation of Israeli journalists and reporters, including Avi Issacharoff, Ohad Hemo and Dana Somberg. Issacharoff reported to the Times of Israel on Jan. 23 that Abbas sought in this meeting to hold Israel liable for the negotiations’ suspension in 2014 and to quash any accusations of incitement against him.

Also during that meeting, the PA stressed its right to a peaceful popular resistance against extremism in all its forms, according to a press statement that day from Abbas’ office. Abbas had also warned about the Israeli-Palestinian conflict turning from political to religious, the release said.

The many meetings seem aimed at unifying the Palestinian discourse toward the various sectors of Israeli society to make peace and to refute the allegations against Palestinians by the Israeli right, the last of which was made Feb. 4 when the Israeli ambassador to the United Nations, Danny Danon, accused Abbas of encouraging violence against Israelis.

These meetings also seem designed to prevent more Israelis from being attracted to the ranks of the Israeli right and to work on academic and cultural levels to pressure the Israeli government to return to the negotiating table with the Palestinians.

Abbas’ encounters with the Israelis were not adequately covered by Palestinian media, perhaps because they were not held with top Israeli government officials or perhaps the Palestinians are preoccupied with more important issues, given the ongoing unrest. It's also likely that Palestinians are convinced the meetings will not yield any valuable results.

On Jan. 23, the father of Baha Alyan — the man who killed three Israelis on Oct. 13 in a bus shooting attack in Jerusalem — commented on Facebook on Abbas’ meetings with Israeli delegations. Addressing Abbas, he posted, “Mr. President of the State of Palestine, you think it's OK to meet with Israeli delegations, but you don't respond to the request of the families of the martyrs to meet with your excellency.” This post stirred a popular buzz among Palestinians, attracting more than 150 comments, 2,500 likes and 319 shares as of the time of this writing.

Raed Enairat, a professor of political science at An-Najah National University in Nablus and the head of the Contemporary Center for Studies and Policy Analysis, told Al-Monitor, “By holding these multiple meetings with the Israelis, President Abbas wants to refute the official Israeli allegations that he is hindering the peace talks rather than [seeking a] solution, as was the case with late President Yasser Arafat.”

He added, “Abbas will not necessarily score major political successes and breakthroughs within Israeli society, but he is seeking as much as possible to maintain these efforts.”

Abbas has no guarantees that his meetings with the Israelis will change the official Israeli political discourse toward Palestinians, especially as the United States and Israel are not putting the two-state solution on the table. This makes the idea of productive continued negotiation meetings between Israelis and Palestinians a far-fetched one.