Is Israel discriminating against Christian schools?

Christian schools in Israel have not started the new school year, claiming that they are discriminated against and receive much smaller budgets than Jewish schools. 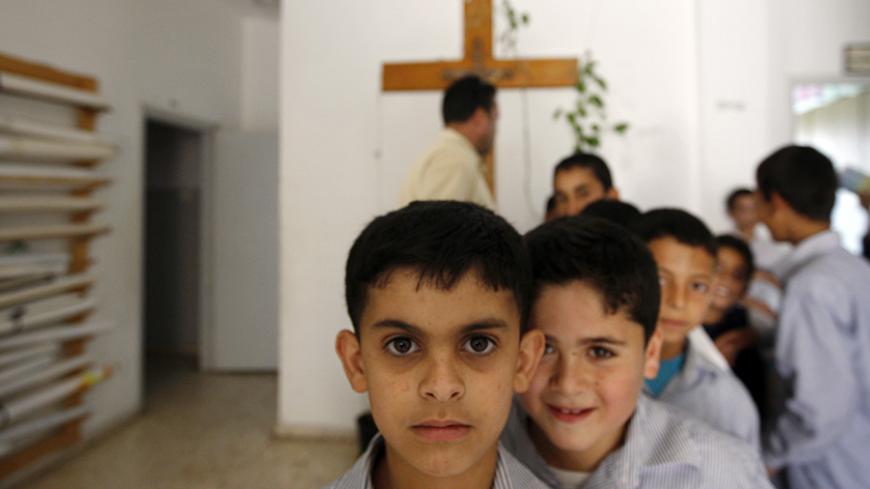 Palestinian students walk in the hallway of their school run by the Parish of Our Lady Mother of Sorrows in the West Bank village of Aboud, May 18, 2009. - REUTERS/Ammar Awad

Thousands of parents, teachers and students from Christian schools across Israel demonstrated Sept. 6 outside the prime minister’s office. They carried signs highlighting the achievements of this unique educational network, and the dangers it now faces: “87% of [Israeli-Christian] high-tech employees are graduates of our schools” and “Schools are our roots.” One sign addressed Minister of Education Naftali Bennett directly: “Bennett, you said you’d be everyone's minister. Did you mean us too?”

But Bennett isn’t the only person to blame for the severe budgetary crisis facing Christian schools. Nor does he bear sole responsibility for the schools’ failure to open at the start of the school year Sept. 1, or for them threatening to take a series of steps that would put the State of Israel to shame. Abd el-Massih Fahim, president of the Office of Christian Schools in Israel, told Al-Monitor that the budgetary cuts began six years ago, when Gideon Saar from the Likud Party served as minister of education. During that time, the Ministry of Education’s contribution to the schools’ budgets dropped from 75% to just 29%.

There are 47 Christian schools in Israel, with 33,000 students and 3,000 teachers, spread out across the country. Some 60% of the students are Christian, while the remainder are Muslim Arabs and Druze. There is even a negligible percentage of Jewish students.

Amal Reihan Abu Ramadan teaches at the Catholic school in Jaffa. She told Al-Monitor that her school has 1,000 students of different religions, including her own children. Students learn to respect one another, regardless of any differences of religion, nationality or gender. They are taught what tolerance is and how important it is to respect others.

It is an egalitarian school, founded in 1882 by the Institute of the Brothers of Christian Schools, an order created by the patron saint of teachers, Saint Jean-Baptiste de la Salle of France. The order’s goal was to create an international educational network dedicated to serving poor children. The school's mission is to educate to lofty values, without highlighting religious symbolism. “It is forbidden to wear religious symbols in the school. Priests are not allowed to wear frocks. On normal days, they dress like all of us. As a Muslim woman, I am not allowed to wear a hijab and Jewish students are not allowed to wear yarmulkes,” Abu Ramadan said.

Massih Fahim said that the school that he heads in Ramle was founded in 1782. For years, it was considered one of the leading schools in the country because of its achievements. He said, “The school has existed for many years, and it is constantly raising the bar. My school was named first in achievements in the center of the country, based on standards set by the Ministry of Education. Instead of encouraging us to be even better, we face discrimination. Why would they try to tear down this vast enterprise? We were about to announce a strike last year, but we received the following message: ‘Cancel your strike, and we will enter into negotiations with you.’ Director-General of the Ministry of Education Michal Cohen even proposed that we become part of the official state school system. It was only when we tried to find out what was meant by the term ‘official’ that we realized how it would actually mean the end of this unique educational enterprise, which produced hundreds of thousands of students in Israel. [The Christian school system has, for instance, a 95% eligibility rate for universities.] According to the state’s guidelines, we would be forced to accept a director appointed by the Ministry of Education, and the same for the teachers, while responsibility over our buildings would be transferred to the local authorities. What would that mean? That we would be giving up everything: the very concept behind our schools and the lofty mission of Father de La Salle to provide everyone with an equal education. It is an invitation to close our schools, even while hundreds of millions of shekels are now being transferred to ultra-Orthodox schools run by Shas [ultra-Orthodox party]. Just look at the coalition agreements they signed with the Likud. We could never even dream of getting what they get.”

Indeed, the coalition agreement signed between the Likud and Shas parties in May stipulates that Shas institutions will be eligible for local councils' education budgets, even though as semi-public institutions these schools are required to teach 75% of the "core obligatory curriculum," compared with public state schools.

Meanwhile, the Christian school protest has been joined by half a million students from Arab schools across Israel.

“And this is just the beginning of the protests,” Massih Fahim said, adding that 45 cardinals and bishops from Europe are expected to arrive in Israel next week to show their support for Christian schools in Israel. The support of this clergy could give Israel’s approach to its Christian citizens a negative image.

When asked if he thinks that the Ministry of Education discriminates against the Christian sector because it is not part of the Jewish educational system, Massih Fahim said, “Yes, of course. There’s no other way to explain it. Take for example the ‘New Horizons’ project [new educational development plan that involves more teaching hours, thus affecting teachers' salaries]. We said that we also want our teachers to receive benefits, including paid sick leave and workshops. The answer we got was no. They refused to give us what they give all the other teachers. We are citizens. We pay taxes. We have rights too.”

Abu Ramadan is also convinced that the discriminatory policies of the Ministry of Education and the State of Israel toward the country’s non-Jewish citizens cry out to heaven. “There is no equality here,” she said. “We pay the same taxes as every Jewish citizen, and yet parents can no longer afford to fund their children’s education. My situation is even worse since I’m not getting my salary now because of the strike. There is no money to pay our salaries or insurance. We are taking the hit for unjust and unequal policies that have been in place for years.”