Israel finally agrees to increase support for Christian schools, but is it enough?

A historical agreement has been reached to rectify the discriminatory discrepancy in state subsidies to Jewish and Christian schools in Israel. 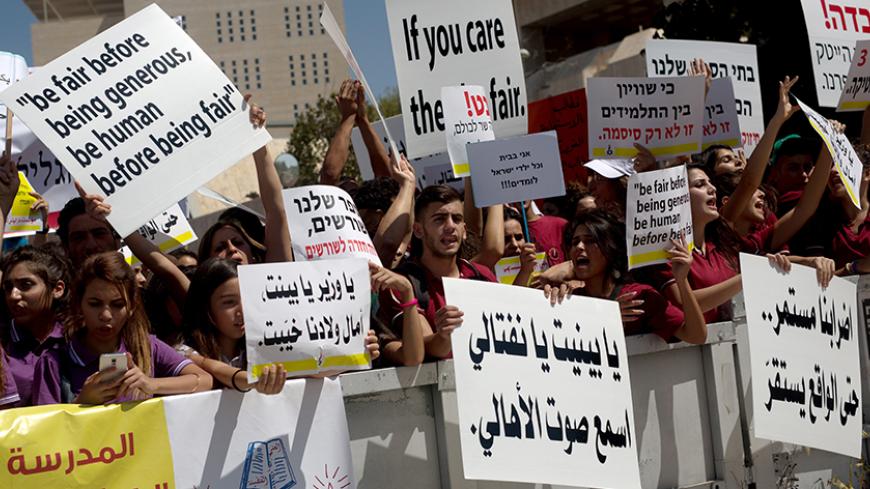 Students hold placards during a protest of Arab Israeli Christian students demanding more funds for Christian schools, which they say receive one-third of what the Israeli government allocates to Jewish ones, Jerusalem, Sept. 6, 2015. - GETTY IMAGES/Menahem Kahana

For the first 27 days of the 2015-16 school year in Israel, some 33,000 Palestinian students stayed at home during a strike demanding equality with Jewish schools, the first such action of its kind. On Sept. 27, the country's 47 private Christian schools — on strike since Sept. 1, the first day of the school year — announced their unanimous support for an agreement reached by a six-person committee representing the Christian schools and the Israeli Ministry of Education. The strike had focused primarily on the state subsidies provided to schools to allow them to lower the tuition paid by students' families.

Botrus Mansour, general director of the Nazareth Baptist School and one of the six negotiators, told Al-Monitor that September had been a difficult month, filled with pressure from the Israeli government as well as the parents of students. Everyone involved in the episode, however, is content with the results, according to Mansour.

“Our efforts began a year ago, and for six months, between March and August, the Israeli officials didn’t talk to us. Our unity and perseverance paid off. This was a huge success,” said Mansour. Christian schools — suffering from a decline in the government subsidy while having to adhere to a cap on tuition fees — had been attempting in vain to reach agreements with the Israeli Ministry of Education so they could remain open without running into financial difficulties.

The Catholic and Protestant schools that went on strike have existed for decades, long before the establishment of the State of Israel. The heart of their mission has been to educate and transmit knowledge. Palestinian students in these Christian-run schools were exposed to a huge civics lesson in the weeks they waited and watched as the adults struggled to convince the government that the right of equality should be universal, irrespective of religion or national background.

Mansour gave special credit to Israeli President Reuven Rivlin. The president, whose job is mostly symbolic, met Aug. 24 in Jerusalem with Christian school representatives in the presence of right-wing Minister of Education Naftali Bennett and became even more involved after he visited Rome and met with Pope Francis on Sept. 3. That the school issue came up at the Vatican seems to have prodded Rivlin to continue his efforts to find a solution. Two negotiators, one clergyman and one layman, flew to Rome before Rivlin's visit to brief the Vatican about the severe financial situation Christian schools in Israel face, Mansour told Al-Monitor.

Israeli media, including television, picked up the issue of the funding discrepancies between Christian schools and similar Jewish schools. In addition, international media, including in Europe, Japan and the United States also ran stories, making the issue a major public relations problem for Israel. The reports revealed that Israel does not treat all its citizens equally, in this case discriminating against the minority Christian population. In a Sept. 16 article in Time, Inna Lazareva reported that what was a 75% subsidy to Christian schools had since been cut to 29%. Officials from Christian schools claim this had led to a deficit of 200 million shekels ($51.6 million) for the coming academic year. Tuition fees for such schools start at 3,500 shekels ($900) annually, with a maximum set at 6,500 shekels ($1,680). Meanwhile, ultra-Orthodox Jewish schools had 100% of their costs covered by the state, thus students pay no tuition.

In the Sept. 27 public statement announcing the agreement, the secretariat of Christian schools said that the Israeli government will advance, via Christian churches, 50 million shekels ($12.5 million) to the Christian schools, including those in East Jerusalem, as a one-time grant for the 2015-16 school year, and in turn, the schools would reduce tuition fees by 25%. The agreement detailed how the two sides will proceed in the future, including the creation of a joint follow-up committee to study the issue of financing for Christian schools so a suitable long-term solution can be found. The Ministry of Education also agreed to include teachers from Christian schools in various efforts to raise teacher skills at these schools. A joint committee will be formed to recommend changes to the status of the schools in respect to their legal classification. The schools committed to make up the days students missed due to the strike.

The success of the Christian schools in reaching a landmark agreement was well-received by the members of the predominantly Arab Joint List in the Knesset, students' parents and the Arab community at large. Students returned to school Sept. 28. Writing that day in the Israeli daily Haaretz, Odeh Bisharat called the Christian schools' protest a “founding event” and suggested that the “DNA” of the successful strike be well-studied.

Mansour said that the bond created between the schools and the community at large as well as bonds among the Christian schools during the monthlong strike were probably the most important accomplishments of the action. “If we are able to keep the spirit of unity that we experienced during this month, we will ensure that our efforts and struggle will continue for years to come,” he said.